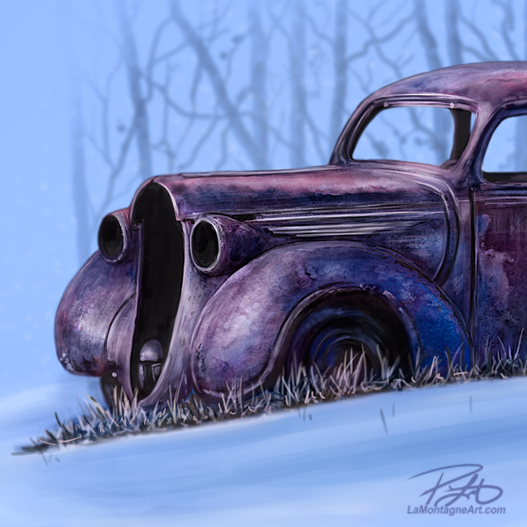 All of my reference photos for the animals I paint are neatly organized into folders and sub-folders. But there’s another folder on my desktop labelled ‘Possibles.’ From time to time, I’ll stash images there that might make good paintings. They usually become practice pieces and if I like the beginnings, they’ll eventually get the fully rendered time and energy.

It isn’t just animals in that folder, however. Sometimes it’s people, other times it’s things I’ve seen in nature, and occasionally man-made stuff, too. There are some photos I took from inside a small barn, some island formations from out in Barkley sound, a few trees and rocks, and some old cars.

Last month, on my most recent visit to the cabin near Caroline, my buddy Darrel and I were out for a walk along back roads and trails, exploring the area. We ended up in a junk lot owned by our hosts. It’s the kind of place you’ll find in many rural locations. Homeless windows leaning up against a weathered shed, coils of rusted wire, a phalanx of water heaters, a pile of tires, a couple of old campers, and some cars and trucks.

While it might seem a junk pile to some, I recently read that this sort of thing used to be, and still is for some, a necessity of rural life. People out in the boonies have to fend for themselves and fix what breaks, often without a nearby hardware store. Little gets thrown away because you never know when you might need it, and lots like this are where you store the possible solutions to unknown future problems.

Bust a bolt on the lawn-mower? Well there’s probably one on that old snow blower. A section of fence broken during a storm? There’s a length of wire that might do the trick.

We peered through windows, poked around the neatly organized piles and explored the forgotten treasures, mindful that this was still somebody’s property. With our good relationship with the owners, we were sure they wouldn’t mind.

A couple of old vehicles caught my eye. We wondered how long they’d been there, and what hope had there been for their future. Possible dreams of restoration, before life got in the way? Waiting for a picker to come by and make an offer?

Darrel pointed out that through the frame of the old 1950s pickup truck, missing its bed, a number of trees had grown up. One of them was a medium size, well established and quite tall.

The next car was older still and in much worse shape, just the rusted out body and frame, but it tugged at me. At some time, especially when it was new, somebody probably loved this car. They might have saved for years and spent all they had on her. It might have been the first family car when it was new and someone else’s first car when it was used.

Where had it gone? What roads had it traveled? What milestones in what person’s life were arrived at in this car? How many kids learned to drive in it? Maybe somebody got proposed to in it. Perhaps somebody was even conceived in the back seat.

Who knew this car and was sad to let it go?

Whatever life that car had lived, we were likely visiting its final resting place. I’m reminded of a line in the song ‘Silver Thunderbird,’ by Marc Cohn.

“The secrets that old car would know.”

I thought of these things while snapping pictures and thought, I want to paint that.

As I am not a fan of the holidays, I had planned earlier in the year that rather than go to my mother-in-law’s gathering in Red Deer this year, I wanted to stay home. Shonna was fine with it and even though she’s not a fan of Christmas, either, she went home on the 24th for a couple of nights and I had the house to myself. I promised myself I wouldn’t do any work. I was going to read, watch movies, nap and do nothing.

I get up at 5:00am most days and have for many years. While I could have slept in Christmas morning, I decided not to waste the day and rose early as usual. I could always nap later.

There is a long list of paintings to get to on the board in my office, about a dozen animals for which I have reference that I will start in the coming year. But those are work. This Christmas morning was kind of a gift to myself, and since I still felt like painting, I went to the ‘Possibles’ folder and found this car.

I worked on it for a few hours and then went for a hike. Came home, read for a couple of hours, napped, watched a movie and really did enjoy the solitary day off. When I woke Boxing Day, I had to get an editorial cartoon done and sent, but then I spent the rest of the day working on this car.

I didn’t want to finish it. Even this morning, I was still picking at it.

I took liberties with the proportions, as I do with my animal paintings. It’s not really a caricature, but it’s not accurate either. It’s a little cartoony, but hey, that’s me. It was the feel of the scene that I was after, the character of the bones, the textures in the rust, and a little of the melancholy I felt while standing beside it.

This old dead car, whose stories I still want to hear.