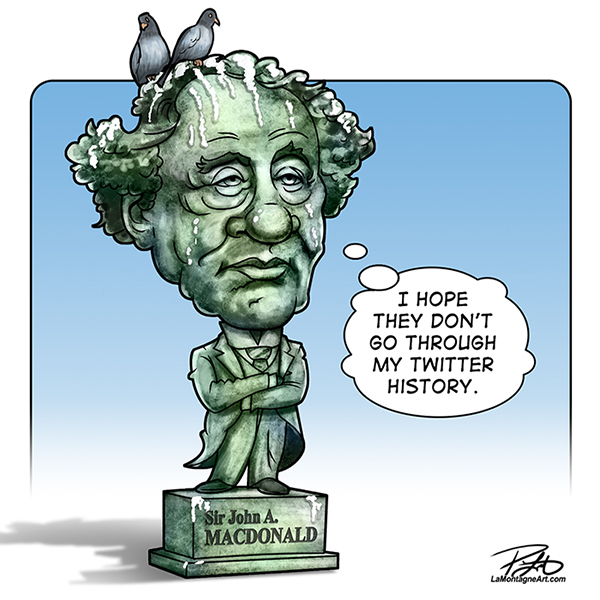 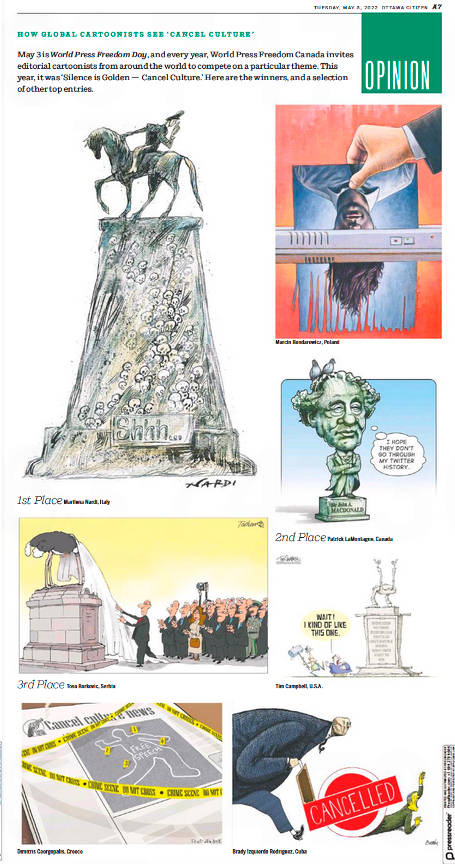 Taken from their site, “(the competition) receives hundreds of entries every year, often from countries where press freedom is not a reality but a distant dream.”

Even though I’ve been a nationally syndicated editorial cartoonist for more than 20 years, drawing more than 325 cartoons a year, I don’t often enter competitions. Although my newspaper clients will often enter their editorial pages, or my local paper, The Rocky Mountain Outlook, will submit cartoons on my behalf. So, my cartoons have won, placed or have been an ingredient of several Canadian Community Newspapers Association awards over the years.

I don’t enter the annual National Newspaper Awards, as I am a freelance cartoonist, and consideration for those awards requires sponsorship from a daily newspaper. While several dailies run my cartoons each week, I’m not in any of their employ. So that technicality means I can’t submit for the NNAs.

But then the following call for entries arrived in February for the 22nd Annual World Press Freedom cartoon competition.
_____
Silence is Golden
Cancel culture has become a source of our newest cultural cleavage.

Whether it be on social media or at live events, ‘cancelling’ someone has become a modern-day version of excommunication and is being used as a weapon by political partisans both left and right to discourage civil discourse and media freedom.

In opposing systemic racism, misogyny and xenophobia, progressives feel the need to resort to extreme tactics in an attempt to be heard.

Fearing that history is being re-written, traditionalists, for their part, use cancel culture to silence critics and whitewash history’s wrongs.
_____

It reminded me of a cartoon I had drawn featuring a statue of Canada’s first Prime Minister. So, I formatted it according to the criteria and submitted it. With entries from all over the world, I surrendered any expectations and didn’t give it any further thought.

Then a couple of weeks ago, I was informed that I was a finalist. But I didn’t know if that meant I was in consideration for the top three or the additional ten that traditionally receive honourable mention. So once again, I set aside any high expectations.

I was pleasantly surprised today to find out that my cartoon received second place in the competition, between the winner, Marilena Nardi of Italy and Toso Borkovic of Serbia in third. 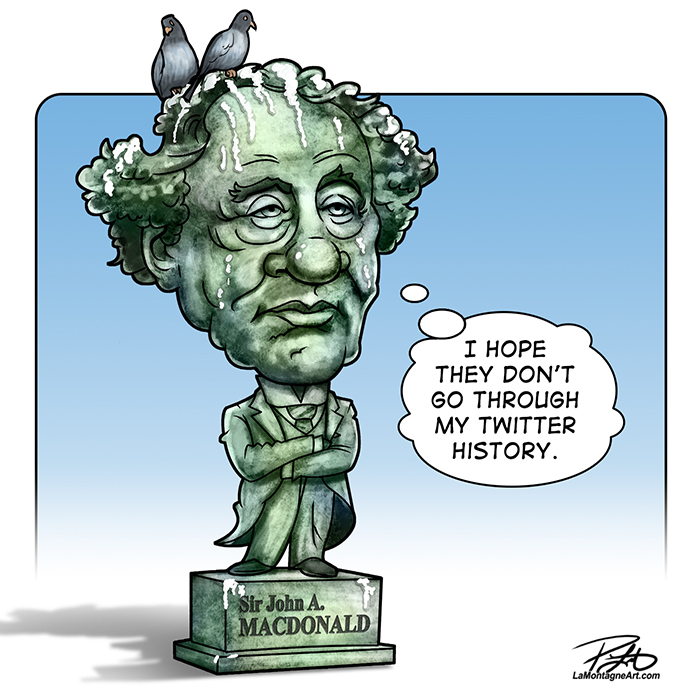 I enjoyed drawing this cartoon, though I learned long ago that what I think is clever and what other people like can be very different things. It’s a running gag between my wife and me that if I think a cartoon is particularly good, it won’t get printed anywhere. But if I send out one that meets the strict quality control metric of “good enough to meet my daily deadline,” that’s the one that gets printed and complimented the most.

I’m grateful to be counted in the top three and for the prize that comes with it, especially considering the many talented and skilled cartoonists worldwide whose work is no doubt worthy of the same recognition.

But I won’t let it go to my head. After all, the cartoon I sent this morning was about our wacky Canadian weather. So, what do I know?