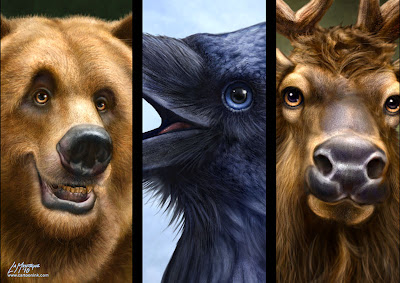 As regular readers will know, I’ve been working on a series of animal paintings lately. While I had originally planned on having fifteen done by April, that time line is proving to be unrealistic due to my current commission workload.

My intention had always been to sell prints of these images, but my initial research into that market revealed other avenues I hadn’t considered. With the generous help and advice from galleries, books, and a few other artists, I now have a clearer direction in mind.

There’s a lesson, by the way. Ask for help. You’ll be surprised how many people are willing to share their time and knowledge with you, if you simply ask nicely. And remember to pay it forward.

A couple of months ago, I started talking to a local gallery about selling giclee stretched canvas prints. This has been a bit of a nervous process, because I know that galleries get approached on a daily basis by artists wanting to showcase their work. Most of the time, the art is declined, either because of the quality or because it isn’t any different than the work they’ve already got for sale.

I was fully prepared for rejection. As any working artist will tell you, that’s just part of the job. Too many artists take it personally and fail to realize that galleries are basically art stores, and if their wares don’t sell, they won’t be in business for long.

Yesterday, I received confirmation that my work has been accepted for display and sale on a consignment basis at Editions Gallery in Banff. I would have been happy if they’d agreed to take only one piece, but they’ve asked for all three of them in both of the size runs I’ve laid out. They will also consider any others that I paint in the future.

Considering how much I love painting these pieces, this has turned out to be a very good week for me. It has also further reinforced the lesson that nothing comes without a certain amount of risk. While some people have told me I should do more ‘traditional’ styles, I’ve no desire to try to be the next Robert Bateman. He’s doing quite a fine job of filling that role himself.

I’m a cartoonist who loves to paint, so whether it’s caricaturized portraits or whimsical looking animals, I’m quite content with the marriage of those two styles. I also have an awful lot of fun with them, and as any artist will tell you, that always shows up in the work. Case in point, I’m working on another animal right now, and having a great time doing it.

As Henry Miller once said, “Paint what you like and die happy.”

5 thoughts on “Fur and Feathers”