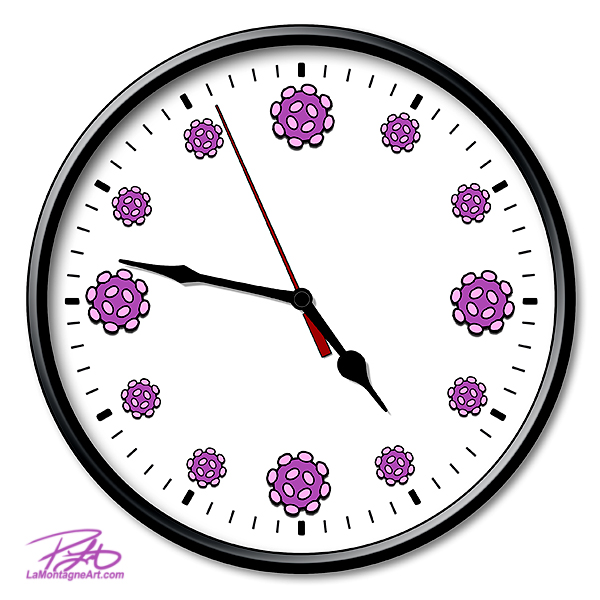 After two-plus years of wearing a mask, staying home, the shots, booster, and trying my best to avoid the plague of the 21st century, that sumbitch finally got me.

I’ve always had a sound immune system and rarely get sick. I can go two or three years at the best of times without a cold or flu. I imagine much of that has to do with no kids and working from home, so I don’t get exposed to every virus making the rounds.

But when I get sick, it’s a knock me on my ass, man-cold. I become Cameron at the beginning of Ferris Bueller’s Day Off.

Shonna and I had a frightening, stressful experience on June 11th in Calgary, a story for another time. Still, I’m guessing the flood of adrenaline from that and the subsequent let-down effect scuttled my immune system and opened me up for attack.

I got a tickle in my throat last Saturday, and the test returned negative. When I woke Sunday morning feeling congested, I took another test and sure enough, it was positive. I felt OK and hoped my adventure with COVID would be like Shonna’s earlier this year.

She had the sniffles for two days, worked from home and felt fine, said it was the easiest cold she’s ever had.

Shonna and I can’t keep our distance in our modest home, but I slept on the couch since I still get up earlier than she does most days, and she slept in that week. Thankfully, it’s a very comfortable couch.

Still, I expected I would get it from her then, and we both isolated, just in case. But I never caught it, or I have been operating under the false assumption that I probably got it and was one of those lucky ones who didn’t have any symptoms.

When I tested positive last Sunday, I thought, “OK, I’ll have what she had!”

Cocky cartoonist. It even inspired this cartoon. 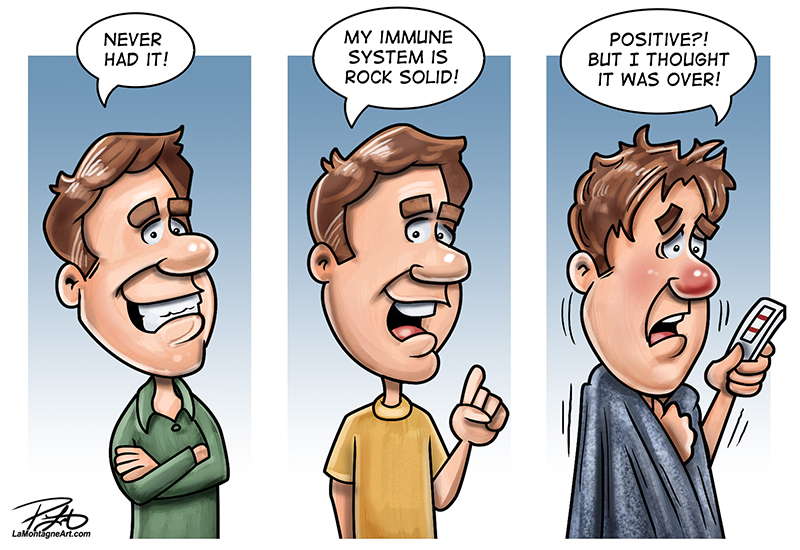 I warned a few people I’d seen days before that I’d tested positive and settled in for what I assumed would be a mild cold. Instead, by Sunday evening, I felt like absolute dogshit.

Runny nose, congestion, headache, muscle and joint aches, chills, etc. I’ve managed to work every day and get my cartoons out, even worked several hours on a painting, but there weren’t any long workdays. I didn’t have the energy.

The literature on this version of COVID, which I suspect was a variation of Omicron, is that it’s mild compared to the ones that came before. Upon further investigation, what medical professionals mean by ‘mild’ is that you’re unlikely to require a hospital visit. But the mild experience can be anywhere from one sneeze to “didn’t I see you on The Walking Dead?!”

I slept on the couch again last week, and it looks like Shonna avoided it, or her previous infection of hopefully the same variant is protecting her. We both know you can get it again.

Over-the-counter cold meds helped, plenty leftover from Shonna’s experience because she barely touched them. I drink plenty of water at the best of times, but I must have been downing 3 litres a day last week, especially if you factor in all the tea and soup.

As I publish this on the 9th day after my positive test, I feel pretty good. From what I’ve read, you can test positive for up to 90 days afterward, even though you’re no longer contagious. It’s an antibody thing. But I’ll take a test tomorrow anyway.

An unfortunate side effect is that my sense of smell has been altered. This happened to me after a bad cold years ago, and the problem lasted for months. Hopefully, this won’t be a repeat performance. It has something to do with the inflammation traumatizing nerves in smell receptors and is relatively common. As smell is a big part of taste, certain foods are unappetizing right now, and there’s an underlying constant weird smell to everything.

I have plans to go away for a guy’s weekend later this week. The friend I’m going with isn’t concerned, mainly because he’s pretty sure he recently had it himself, and I’ll be past the ten days when I see him. While I could have done without this infection, I am grateful that this bout with the plague didn’t cancel this trip we’ve booked for months.

Bottom line, this felt like a nasty cold or flu. Survivable, sure, but not an experience I care to repeat anytime soon. Regardless of where you sit on the vaccine argument (and no, I don’t care to discuss it), I’m glad I got mine. Because given how bad this felt, especially for the first three days, I don’t want to know how much worse it could have been.