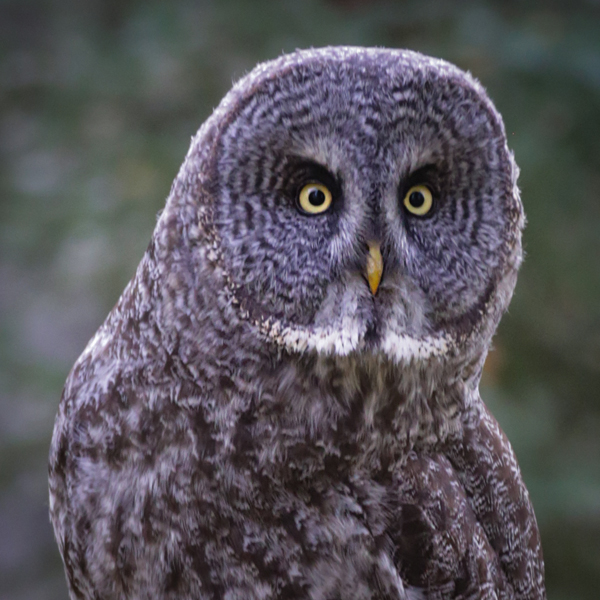 With the brilliant fall colours and abnormally warm October temperatures, the timing couldn’t have been better for some R&R in Central Alberta ranch land with a good friend of mine. For five days, we caught up, reminisced, ate good food, tipped back a few drinks, played Scrabble and cards like old men, and enjoyed the slower pace.

As usual, I took plenty of photos, mostly of horses, cows and Jingles, the most good-natured dog you’ll ever have the pleasure to meet. 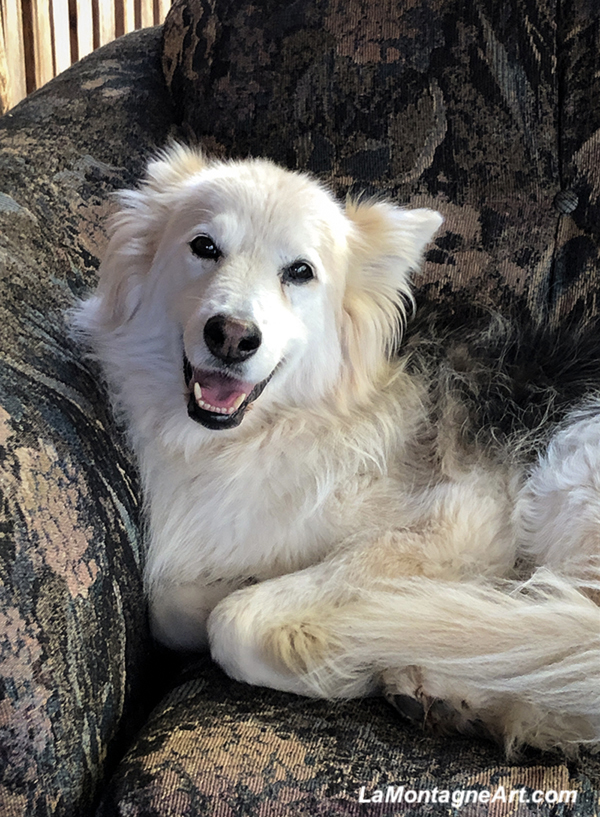 I even caught sight of a moose one evening, though too far away for reference. But anytime I see wildlife is a win. 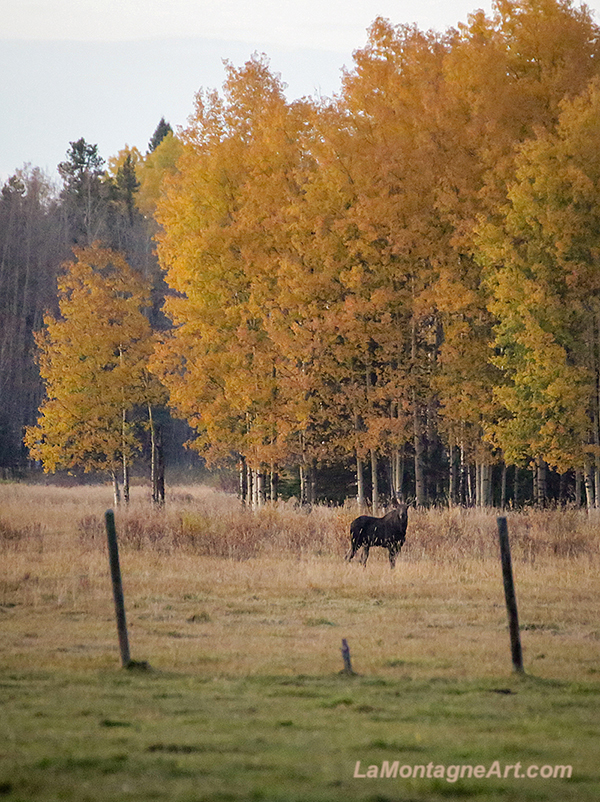 In my regular day to day, I get up at 5am, even on weekends. For anyone who is self-employed, weekends often don’t mean much anyway. So when I do take time off and sleep in, I’m still an early riser.

On our last morning, I woke just after 7 to an eerie warm light coming through my window. I got out of bed, pulled the curtain back and thought it looked like that strange hazy glow of forest fire smoke. Since we haven’t had any of that in a few weeks around here, it took me a minute to realize it was just the light bouncing off the yellow leaves on the trees and ground.

I quickly dressed, grabbed my camera, and snuck out the back door of the cabin. I didn’t want to go past my buddy’s bedroom and possibly wake him. My photography skills just weren’t adequate to figure out how to capture the weird light I was seeing, so I resigned myself to simply appreciating the moment. The three previous mornings had been pretty, but this was much more intense.

Since I was up already, I wandered out to the road to see if there might be some deer or a coyote around. I knew that anything I might encounter would take off as soon as I saw it, so the best I might hope for would be a few quick snapshots.

When I emerged from the lane onto the road, I spotted a large shape on a fence post. At first, I thought it might be a hawk. I’ve long been trying to get photos of a red-tailed hawk in the wild, but each time I see one, it’s usually while I’m driving with nowhere to pull over.

At the same time, a little way down the road, there were two white-tailed deer. They spotted me just as I raised my camera. I got one shot before they bolted into the trees, but it isn’t worth sharing. 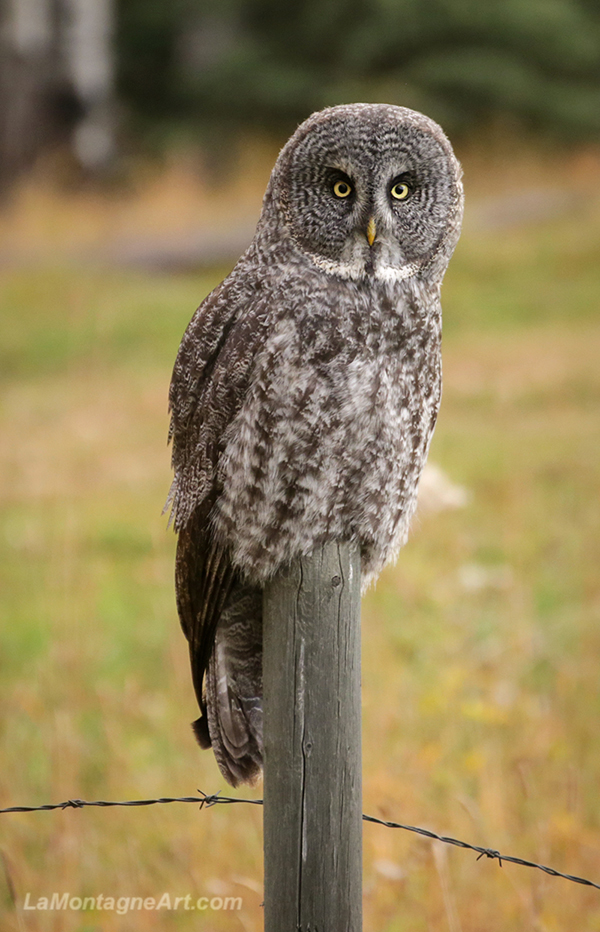 My attention quickly returned to what I now realized was a Great Grey Owl. A common species in Alberta, but I’ve never seen one in the wild. I thought I might get a few quick shots before it took off, especially since it looked right at me, but my presence didn’t seem to be a problem.

Female Great Grey Owls are larger than males but there’s no other way to easily tell their gender. As this was a single and quite large, I’m going with she.

With each step I took, I expected her to fly away, but she seemed more interested in finding her breakfast than worrying about me. I crept closer and moved a little farther down the road around her to get the best light, continuously taking shots.

Eventually, I got to within 8 or 10 feet and figured that was close enough. I didn’t want to crowd her. With a 70-300 mm lens, I knew I’d still capture plenty of detail.

Finally, after watching her snag a mouse and eat part of it on the next post, she gracefully dropped from the post and silently flew down the fence-line. Having taken a few dozen photos, I thought that was it, and I was grateful for the gift. 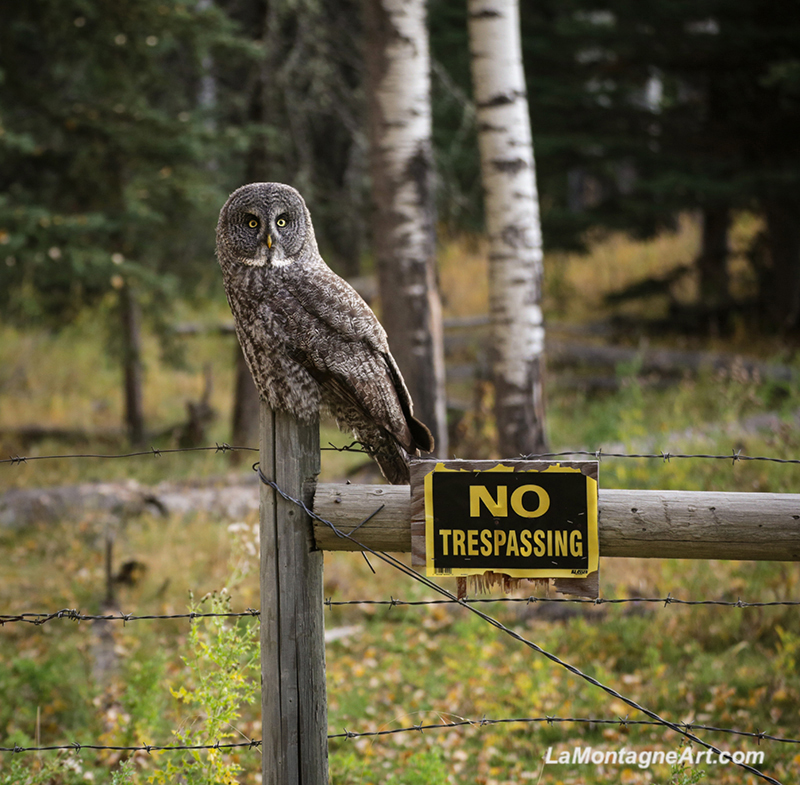 But she didn’t go far. Her next perch was even closer to the cabin than the first. I wandered back the way I came, again expecting her to take off, but she stayed put. I enjoyed her implied audacity at ignoring the No Trespassing sign, coupled with the fact that the sign colour matched her eyes.

Eventually, she flew into the trees, but still close to the property line. I took even more photos because her perch this time clearly showed the incredible camouflage of her feathers against the nearby tree bark. 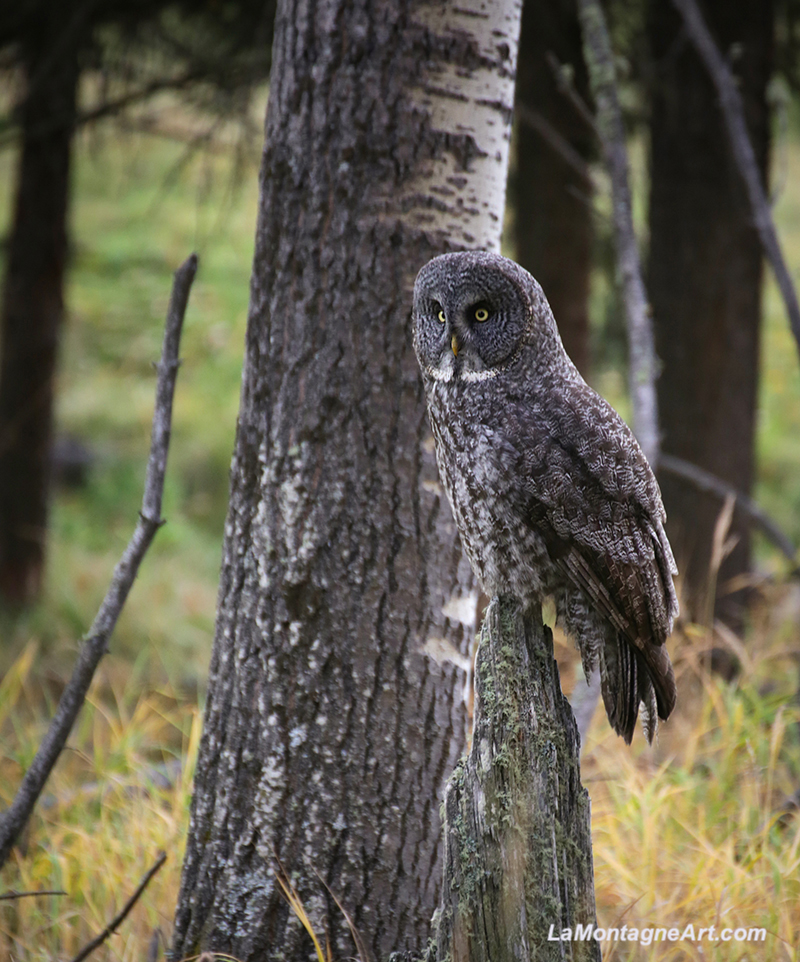 Since Darrel is also an early riser and I didn’t want him to miss out on this privilege, I walked back to the cabin to tell him. I knew she might be gone before we returned, but I’d already taken plenty of shots and thought it worth the risk. He was eager to see her as well, and by the time we got back, she was in the same spot.

We watched her move between three different perches. We were so close that Darrel could still get some nice shots with his phone. He took some video as well, but it also captured the sound of my camera shutter on rapid fire. 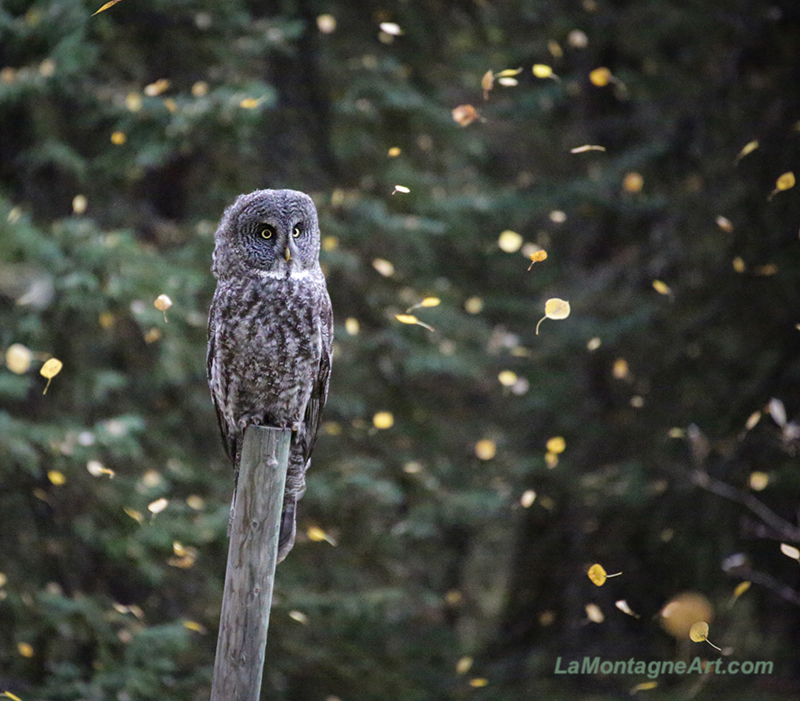 At one point, a brief gust of wind came up, throwing clouds of yellow leaves around her. It was such a treat to take photos of her in multiple environments, almost like she was a model for hire.

Finally, we decided we’d invaded her space enough and I didn’t want to ruin her chances of getting a meal, even though I’d seen her catch one mouse already.

I thanked her for her patience, and we walked back to the cabin, looking through the shots we’d taken.

After we’d eaten a small breakfast, Darrel saw movement out the window and said, “She’s back!” 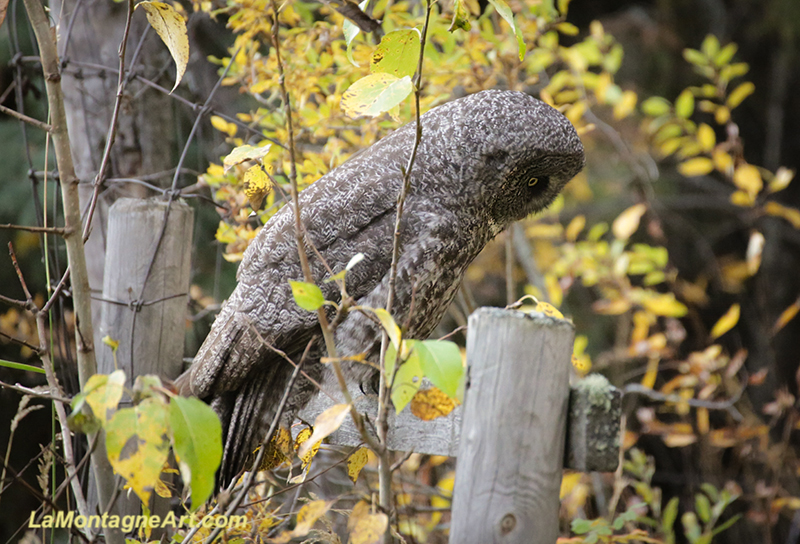 Now perched on the fence on our side of the road, she still didn’t seem to care that we were there. 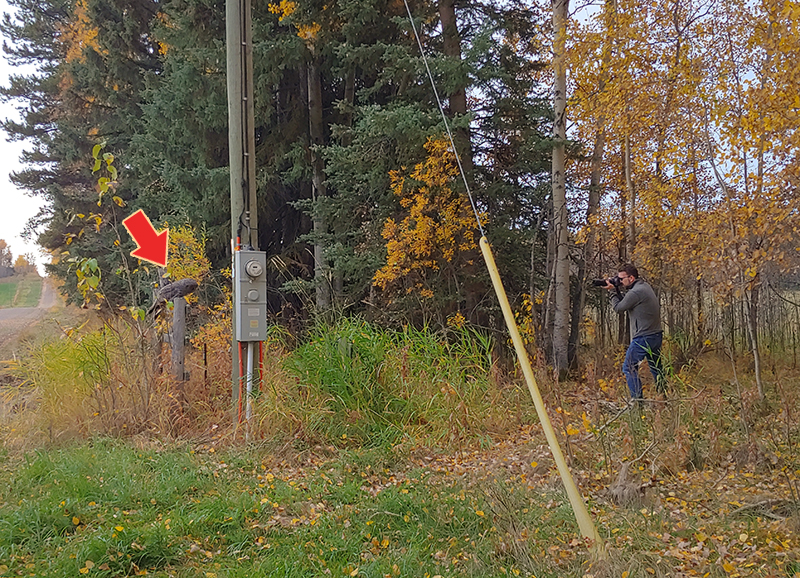 We watched her jump down into the grass to catch a mouse, hop back up on to the same perch, eat it down whole and repeat the process. Here’s a time-lapse of the Great Grey hunter in action. Not a good day to be a mouse. 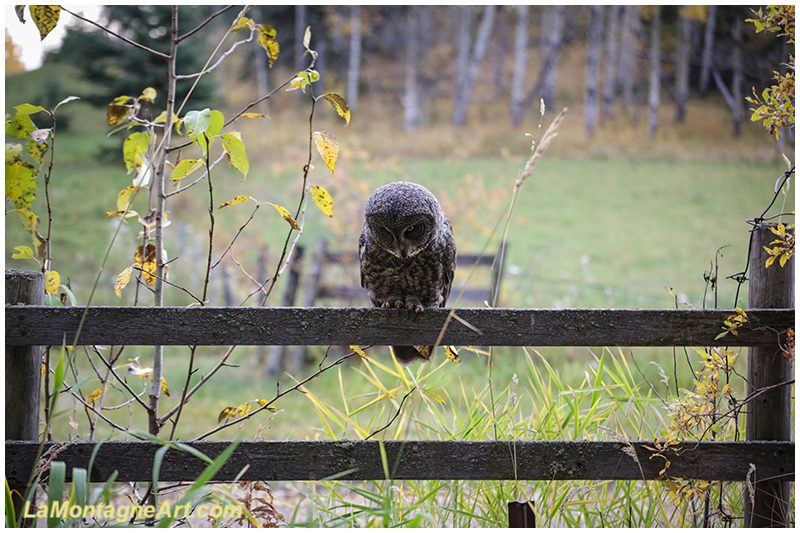 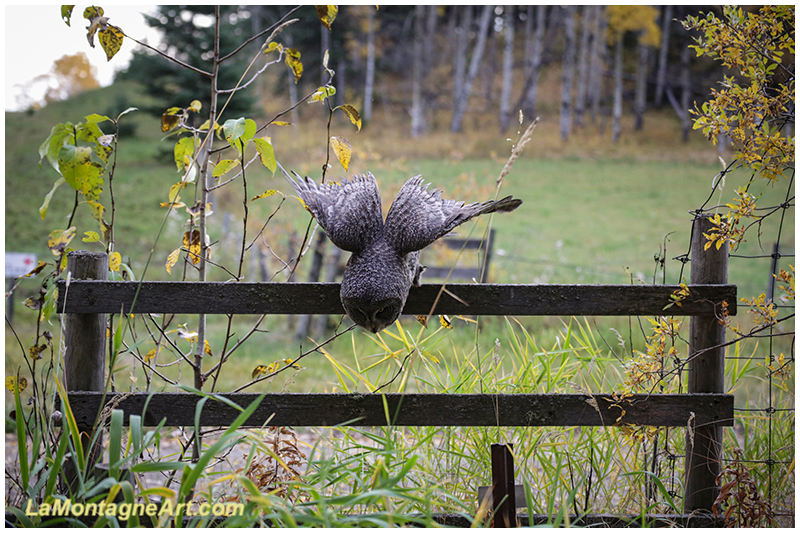 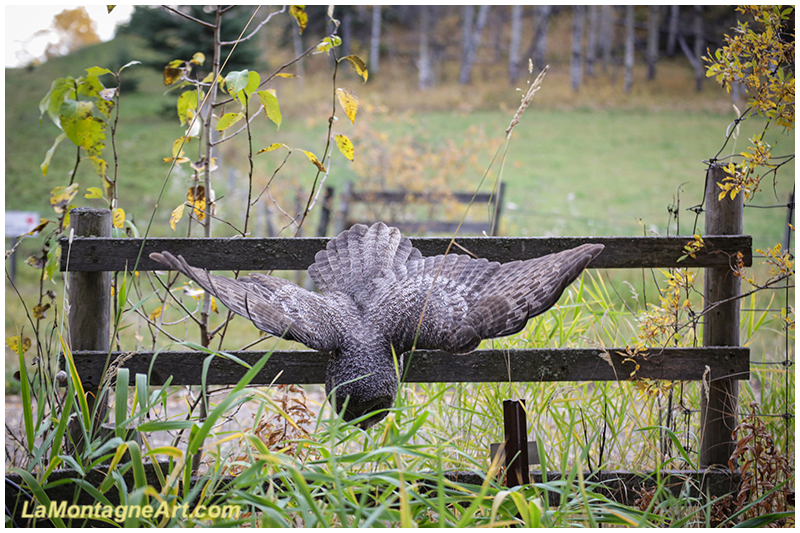 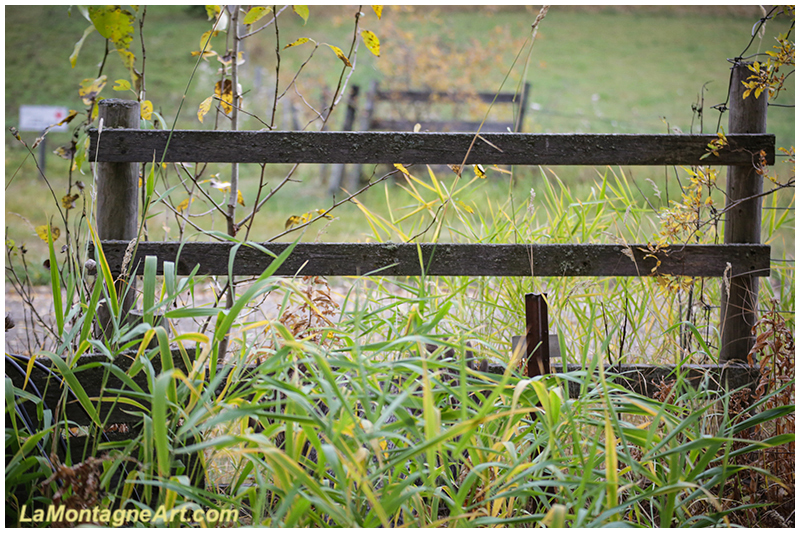 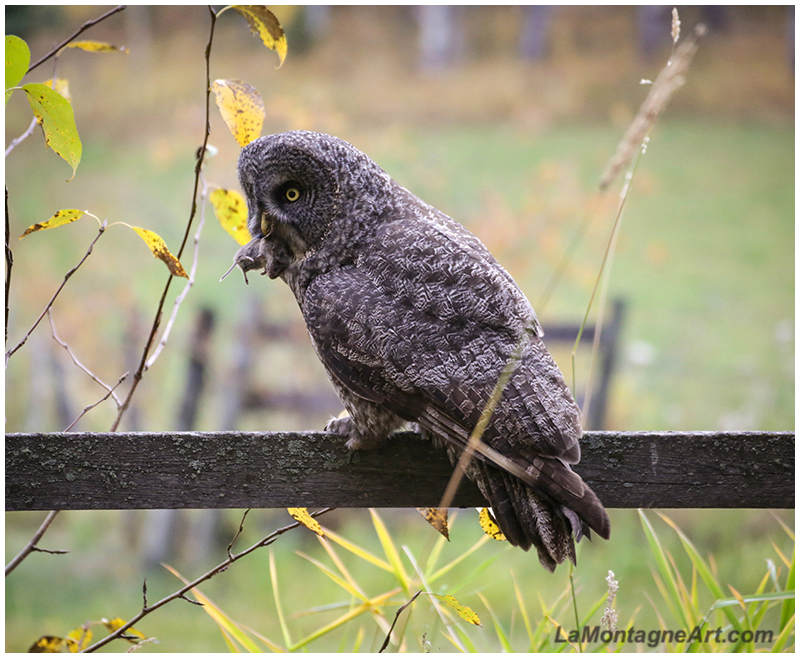 I’ve taken photos of Great Grey Owls before, at the Calgary Zoo Aviary and at the Alberta Birds of Prey Centre in Coaldale. In those cases, they’ve been orphans and rescues that can’t be released back into the wild. I’ve even painted a closeup of a Great Grey before.

But to see one this close, at eye level in the wild, going about her morning, so tolerant of our visit, was a truly special experience for which I’m grateful.

As the cold weather will no doubt be fast upon us, and with nowhere to go, I plan to spend a lot of time painting. Much like the squirrels and other critters storing up food for the winter, I’ve been stockpiling reference photos for new pieces and have a few already planned.

I believe I’ll add a Great Grey Owl to that list. 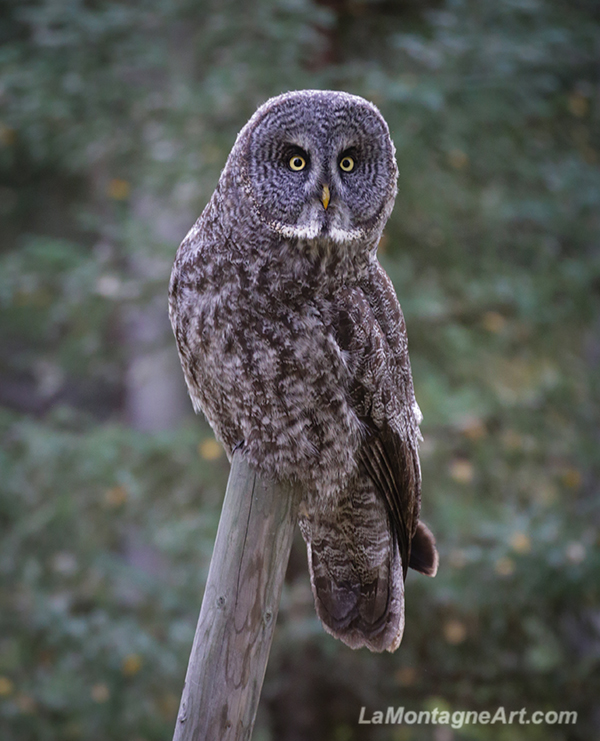 If you’d like to support these beautiful birds and others like them, please donate to the Alberta Birds of Prey Foundation. They do great work for wildlife conservation and education.