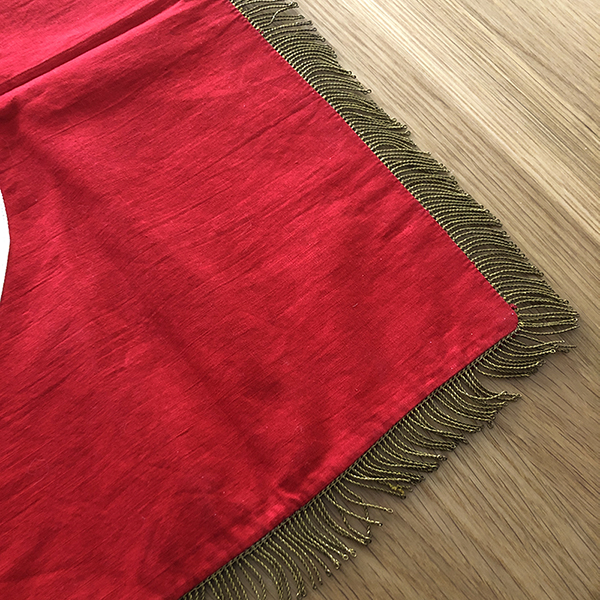 Sometime in the late 90s, my grandmother and her husband were clearing out some things, and my Dad acquired a Nazi flag that John had brought back from World War II. My father thought it was an interesting artifact, but it spent the next several years in a plastic Hudson’s Bay shopping bag in their basement.

Years later, it came up in conversation while visiting my folks. As Shonna and I are both interested in the period, and I had been reading Richard J. Evans’ Third Reich Trilogy, we asked if we could see it.

I volunteered to do some research and eventually try to find a place for it in a museum. My mother was glad to have it out of the house. For the past few years, it sat in our basement, tucked away on a shelf, folded up in the same Hudson’s Bay bag.

It’s a square flag made of canvas, well stitched, 2 feet on each side. It’s red with a white circle in the middle, containing a black swastika, the traditional Nazi flag with which we’re all familiar. Three sides have gold collared braided fringe. The top edge has three sets of evenly spaced canvas ties.

There are dark stains on one side. It would be easy to imagine that it’s blood, making for a better story, but I suspect it’s likely grease or rust. 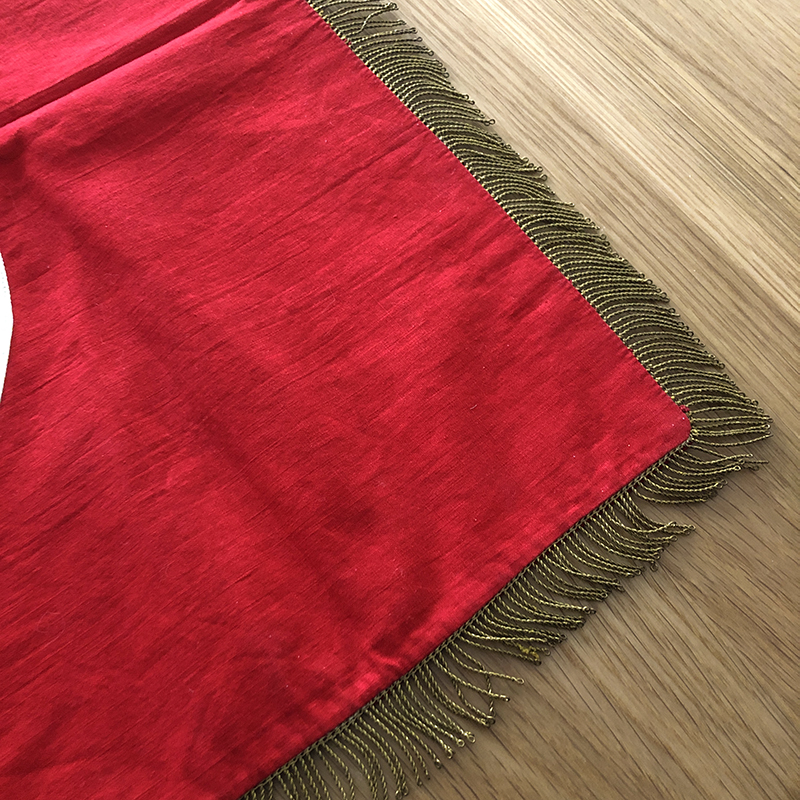 I’ll only share a photo of the corner of the flag. I don’t want somebody to Google my name and have a Nazi swastika come up in the images, alongside my editorial cartoons and whimsical wildlife paintings.

In our current online culture of ‘shoot first, ask questions never,’ my art career would likely be damaged or concluded faster than I could say, “wait a minute, I can explain.”

So you’ll have to use your imagination.

My research revealed that this flag was most likely a banner tied to a fanfare trumpet or bugle. There were similar banners online, but I failed to find an exact match.

When I came to the end of my desire for specifics, I turned my attention to finding an appropriate place for it. There is a brisk online trade in these items, but for reasons I hope I don’t have to explain, I didn’t want to make any money on this artifact, given its dark past. Nor did I wish to keep it.

It’s a cliché to say that those who forget their past are doomed to repeat it, but that doesn’t make it any less accurate.

If we discard these artifacts, it makes it easier to forget. The sacrifices made to stop Hitler and the Third Reich, the millions murdered in concentration camps, and the lives destroyed in World War II become statistics, without other means of refreshing our collective memory.

Despite the historical weight of this banner, it’s not a rare piece. Soldiers bring home war souvenirs, and their children and grandchildren find themselves the inheritors of these items, with no idea what to do with them.

I offered this piece to the Holocaust Museum in Ontario, the Military Museums in Calgary and the Bomber Command Museum in Nanton, Alberta. Unfortunately, each declined the offer because they either didn’t have space or had enough similar artifacts.

If I couldn’t find a place for it, I was ready to burn it, but that presented another problem. We live in a townhouse condo complex with no firepits. I could take it with me to the cabin we occasionally rent or on a camping trip, but my overactive imagination doesn’t have to work hard to picture it found in my belongings after a collision. Or perhaps somebody walks by while I’m unfolding the banner at a campsite, quick to record a video on their phone.

A couple of weeks ago, while browsing the morning news stories looking for cartoon ideas, I came across an article. Someone discovered that an Ontario man had displayed several Nazi artifact images on Facebook some years ago. He was in a position of authority on a hospital board and was called upon to explain the photos. His motives unclear, the conclusion was that he showed poor judgment for a person in his position, resulting in his dismissal.

The journalist sought the opinion of Valerie Hébert, Ph.D., an associate professor of history with Lakehead University in Orillia. Dr. Hébert is an expert in Holocaust education.

Figuring she would have some solid advice for me, I sent her an email explaining my dilemma.

Dr. Hébert provided links and options for me but also cautioned that there are “expenses that go along with authenticating, restoring, accessioning, and storing items. If what you offer duplicates something they already have or doesn’t fit with the goals of their collection, they may turn it down. It seems strange to us that historical artefacts would be refused, but so it goes.”

However, at the end of her reply, she presented me with an option I hadn’t considered.

“Should these places decline the donation, but you still wish for it to be preserved, I could use it in my teaching. I teach a 2-semester course on the Holocaust, and a 2-semester course on the Hitler state in alternating years. I would not display the banner in my office but would bring it out in the classroom. Few of my students have personal connections to this period in history and I know from my use of other artefacts that the item itself can make this history come alive in compelling and constructive ways.  I think the banner would also work well to prompt discussion around what we should do with sensitive historical artefacts, particularly those which symbolize such terrible human suffering.”

It didn’t take long to decide that this would be the best use for the banner, and I told Dr. Hébert that I would be happy to send it to her at my expense. It arrived this week.

History is replete with examples of monuments, artifacts and valuable manuscripts destroyed by conquering armies and short-sighted governments. While one might look at the atrocities committed by the Nazis and think it best to wipe it clean from our memory, there is no better teacher than our past mistakes.

One need only look to the rise of the Trump administration in the United States, the misinformation tactics, the artful sowing of division and hatred to see how a culture can become quickly divided and pit against each other. The events of World War II did not happen because of one man’s ambition for conquest and genocide; it happened because the populace not only allowed it, but supported it.

We see it on Facebook, Twitter and in the Comments sections of myriad news and fake news sites, polarized opinions turning people against each other. We surround ourselves with those who agree with us and paint everybody who doesn’t as the enemy, defining ourselves by our politics at the expense of our humanity and empathy.

I grew up as a base brat, spending ten years of my youth in West Germany. I spent five years in the Reserves, and Shonna was in for three, which is where we met.

You could say that the military was the family business, though I decided on a different path. It says a lot about Canada that I grew up in a family where we followed orders, and my Dad worked for the government, but my profession involves calling out that government for its current failures.

I can draw an unflattering caricature of the Prime Minister, criticize his decisions and leadership, without worrying that thugs in jackboots might break down my door in the middle of the night and take me away for re-education. Or worse.

That’s freedom. And we take it for granted.

I visited Dachau concentration camp on a school trip. I have looked upon the ironwork sign that reads, “Arbeit Macht Frei.” I have seen the hundreds of boots and shoes preserved behind glass, the photos of real people so emaciated it was a wonder they were still alive. I have seen the ovens.

It had a profound effect on me and still gives me chills. It’s supposed to.

Words on a page do not carry the same weight as seeing the evidence in person, holding it in your hands, considering its history, allowing it to make you uncomfortable so that it is never allowed to happen again.

That’s why I didn’t want the banner destroyed.

That’s why we remember.

2 thoughts on “A Light on the Darkness”