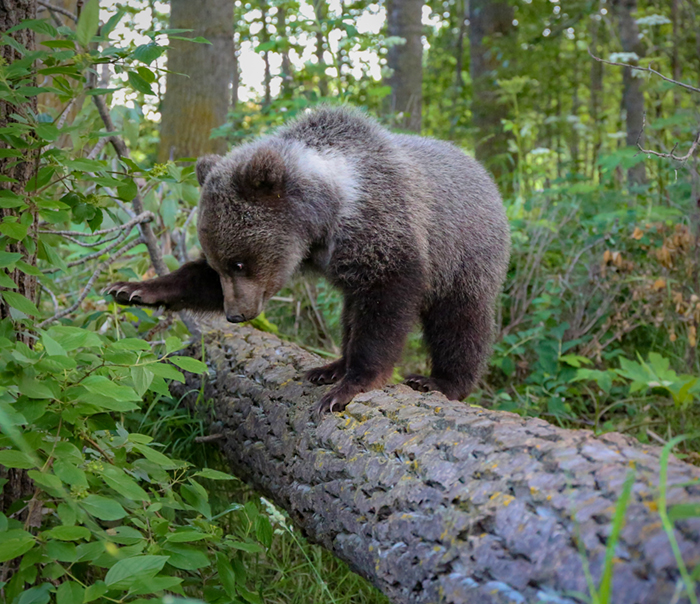 Walking back to the main building after taking pictures of the wolves, Serena said that I was welcome to join her and Berkley on their evening walk. I really felt I’d taken advantage of their generosity enough and told her so, but she said she was taking her anyway, so it was no imposition. I went to the main building for fifteen minutes while Serena and Denise put away the raccoons for the night and took care of some other end of day chores. I’d been told that when I next saw her, Serena would have Berkley with her and she would not be on a leash. Most likely I could expect Berkley to come and check me out and that she might put her nose on my legs, maybe even open her mouth as she did it, but that I shouldn’t be concerned as that’s all it would be.

Sure enough, I saw Serena coming and she asked, “Ready?” When Berkley saw me, she did indeed come over and check me out. While I didn’t ignore her, I also didn’t make a big deal about it as I wanted her to feel comfortable with me. I was wearing shorts, so I felt a cold wet bear nose bump my leg a couple of times.

I told Serena that I knew not to run, as it would trigger Berkley’s instinct to chase. Even at her small size, she can likely outrun me now. While people think bears are big and lumbering, they are incredibly fast when they want to be. A bear can run up to 40mph in short bursts, faster than a race horse, uphill or downhill. That’s why you’re never advised to run from a bear.

But I asked what else I shouldn’t do.

Serena told me not to ruffle her fur back and forth on her back like you might do to a dog as it’s a signal for aggression, or rough play. A bear cub is very strong and even without meaning to, Berkley could hurt me. So while I didn’t need to be afraid of her, I did need to respect her space.

“But I can still touch her?”

Serena said that I could. When I first met Berkley, she was about 12 pounds and very small as you can see in the above photo. That was mid-April. When I saw her again last week, she was 54 pounds. The difference is startling, because while she’s still a cub, you can see the adult bear she’s going to become, especially in the way she walks.

I had already doused myself once again in bug spray before they arrived. I had asked if it would bother Berkley, but Serena said the keepers wear it, so the animals are used to the smell. We headed for the tall grass and trees and I instantly realized the spray wasn’t going to cut it. Again, still worth it, but I was scratching for days afterward.

At first, she stuck with Serena and I walking along the path, but eventually Berkley took off into the tall grass, as she often likes to make her own route. We came to the creek and I was told to sit down on a rock close to the water. Berkley usually crossed a log there and sitting where I was, I might get some good shots. Of course, that didn’t quite work out when Berkley came right to me and started climbing up my shoulders and back. I’ll admit to being quite nervous at this point, but Serena told her to get down and she did.

It should be noted that while Berkley has sharp claws, I’ve never felt them when she’s crawled on me. Not once.

Serena apologized because she suddenly remembered my recent fear of bears, but I was just startled more than anything. Berkley had already found other things to explore, anyway.

Serena told me not to be offended, but that Berkley really wouldn’t be that interested in me. I can’t remember her actual words, but it became clear that I was simply another piece of forest furniture. I was fine with that, because it made following her around and taking photos much more enjoyable and natural.

As we walked, Berkley went this way and that, just having a great time being a bear. She must have climbed more than half a dozen trees and it was amazing to see how easily she did it, scrambling up a trunk as if it was a ladder, then crawling back down to check out something else. She’d dig in the ground, chew on a stick or leaves, eat some grass, whatever caught her interest. I asked plenty of questions, as I always do, and eventually I realized how comfortable I was walking through the woods with a bear. She never strayed far from Serena, but still did her own thing while we happily snapped photos of her. We came to one of many large logs across the creek and Serena crossed first, leaving me on the other side with Berkley. She took a few photos of us with her camera but I knew I’d never get to see them until the fall. Summer is so busy for the park staff that any pictures and video you see on their active Facebook page have been taken with Serena’s phone, although they sure don’t look it.

She just hasn’t the time to download and sort through photos from her DSLR during peak season. So I asked if she’d mind taking a few of Berkley and I with my camera. It warrants mentioning that a lot of my photos from the walk are only good because Serena gave me some tips on shooting in the woods in low light.

I leaned across the creek and nervously handed my camera across to her, remembering my broken lens last month when I fell on some rocks on Vancouver Island. My standing up and then sitting back down attracted Berkley’s attention, which made for a great photo. But then she decided I was worth checking out again and she crawled up on my shoulder. This time, I wasn’t so nervous until she started snuffling my hair, which is when Serena called her off. Berkley crawled off and crossed the log, once again letting me know that know I’m not THAT interesting.

On the other side of the creek, Serena was looking at the photos in her camera, when Berkley came up behind her, started pulling on the string of her backpack. Serena leaned back so Berkley could crawl up on her and I got this shot. This kind of photo can be misleading and people might think Berkley is as tame as their dog or cat. She’s not.

Berkley is a cub and only six months old and they’re still getting to know her and how she reacts to other people. One bear’s personality will be different from the next. Still, the most unpredictable ingredient in these encounters will be the person, not the bear. They can’t risk somebody thinking she’s so cute and reaching out to cuddle her or push her around. People might have the best of intentions, but she’s still a bear with wild instincts.

This experience of walking with her in the woods is not something they can make available to most people. I honestly didn’t expect to be offered this opportunity again after the first time because she’s getting bigger. Serena told me that the keepers have been around me enough to know that I’m not going to do anything to endanger the animals, staff or myself. It’s gratifying to know that I’ve gained their trust, and I don’t take that responsibility lightly. Serena knows Berkley best as she still takes her home every night. It’s a lengthy process getting Berkley used to being alone for extended periods of time. She has a small barn on the property where she goes to sleep during the day and that’s a comfortable space for her. Eventually, she will have a very large enclosure all of her own, and it’s there waiting for her. But to introduce her to such a large space all at once would be frightening so it will be done carefully and gradually. Until then, she demands a lot of Serena’s time, with the nightly walks and constant care, but as she said, “that’s the commitment I made when we adopted her.”

When you see photos and videos of Berkley playing or cuddling with Serena on Discovery Wildlife Park’s Facebook page, it’s because she might as well be her Mom. Berkley trusts her completely. She’s also that comfortable with Serena’s Dad, Doug. At the end of the evening when she saw him in a golf cart, she went right over and climbed up the front of it to see him, putting her face right up to his. Serena’s husband and kids are used to having all sorts of little animals at home, too.

I’m sure they’re getting sick of me thanking them for the opportunities they’ve made available to me at Discovery Wildlife Park. It has been a great privilege to be granted such access to their animals and to continue to build relationships with the staff. Learning about the animals and their behaviour has been as rewarding as taking the photos. Just like many of the animals at Discovery Wildlife Park, Berkley is an ambassador for her species. Post-secondary Biology students are getting the opportunity to visit with her and watch her explore, just like I did. She is providing baseline health stats for a healthy Kodiak bear cub and will do so her whole life. She has already been trained to give urine and has started the training to give blood. That data is shared with universities and researchers to give them a better understanding of bear physiology, which will in turn help with populations in the wild.

I look forward to many more visits to the park and if you’ve not yet had the pleasure, I would highly recommend it. It’s a great place for families and there are education opportunities for all ages. Ask questions, even the uncomfortable ones, but please do so with respect. The keepers are more than willing to answer them.

Responsible wildlife sanctuaries offer many benefits. They provide homes for orphaned animals whose unfortunate circumstances prevent reintroduction into the wild. They provide valuable insight into behaviour and physiology that is often too difficult or unsafe to observe in the wild. And when people have an opportunity to see wildlife up close, it fosters more empathy, and instills in many a desire to protect them.

It certainly has in me.