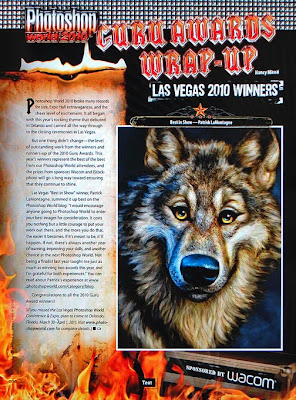 Got a nice smile this month when I opened the December issue of Photoshop User magazine. While NAPP had asked me last month for permission to use my images, I didn’t realize it was going to be such a big spread, so it was a very nice surprise. While this image of the Wolf Totem is the first page of the article, all of the Guru Award winners from Photoshop World in Las Vegas AND Orlando earlier in the year are featured on the subsequent pages, so my Moose Totem is in the article as well. A great spread of images. They even quoted my Photoshop World blog entry.

The above photo doesn’t do the image quality justice. I switched to the Zinio reader and the digital version of Photoshop User when I bought my iPad, so this is a photo of the screen, which never quite works out. The magazine was already great quality, but I prefer being able to zoom in on the images to check out the detail. And it takes up a lot less space on my bookshelf. The actual iPad image of this page looks incredible.

Photoshop User is available on newsstands, but it’s included if you’re a NAPP member, just one of the many perks. Usually it’s 8 issues a year, but just recently NAPP announced that they’re increasing it to 10 issues. For regular readers, that’s a big bonus, as it’s one of the few magazines I read religiously.