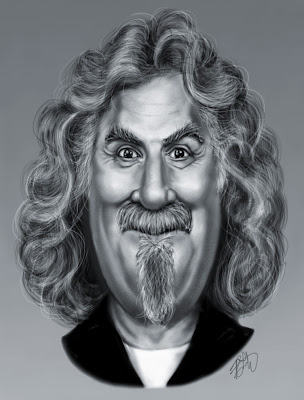 With my heavy workload lately, almost everything I’ve been doing has been for a deadline. Even the animal paintings have now become one more item on my ‘to-do’ list. It has begun to wear a little thin, so I wanted to work on something this week that was just for fun.

I’m really enjoying working on the iPad, and despite the fact that some people lament that it’s not pressure sensitive like a Wacom tablet, the drawing apps available are incredibly versatile. I haven’t painted any people in awhile, and I’ve been itching to get back at that, if for nothing else, than to improve those skills. Billy Connolly is on a growing list of people I’ve always wanted to paint, so he was as good a subject as any.

A few years ago, I read his biography, entitled ‘Billy,’ written by his wife Pamela Stephenson. I was already a fan of his comedy, but I’ve grown to become a fan of him personally as well. ‘The Big Yin’ is such a talented musician and actor, a brilliant comedian, and a dangerously intelligent man.

At one point, I had intended to do a full painting of him, and someday I still might. But for now, this was just an exercise to take drawing on the iPad a little further than just drawing a cartoon character. With the Targus stylus I recently acquired, I felt I could finally do some painting on the device.

I could have done this in colour, but I thought for this first go ’round, I’d stick with black and white. While I didn’t keep track of the time, as I worked on this off and on over the course of a week in the evenings, I would estimate that it took about four or five hours, working on the ArtStudio app. Somebody recently asked me on Facebook if I preferred this one over the Sketchbook Pro app. Having used both, I do prefer ArtStudio to Sketchbook Pro, even though the latter is still a very fine app to work with. I just find the tools in ArtStudio easier to use, and there are more of them. 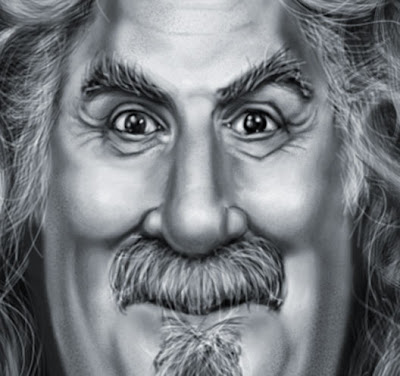 It’s doubtful that I’ll ever do finished work on the iPad, because the resolution capability of the app doesn’t allow for extreme detail, but I will definitely keep stretching, to see how far I can take it. This is undoubtedly the first of many paintings I’ll experiment with on the iPad.