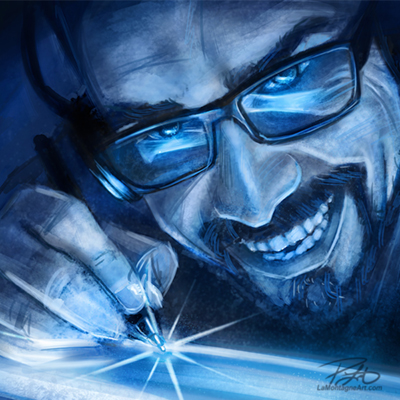 Late last month, I attended the Calgary Tattoo Show to support my friends at Electric Grizzly Tattoo, the shop I frequent here in Canmore.

I spend most of my working life alone, which can be unhealthy at times, so to have somewhere I can go to hang out with other working artists, commiserate on the bullshit inherent in this business of self-promotion, to decompress and share a few laughs, it’s a wonderful thing. Shonna still jokingly refers to it as my artist support group.

Add to that the constant flow of inspiration watching these people work, these past two years getting to know these artists has been all positive. One of the side benefits from hanging out at the shop is that I get to meet many of their clients as well. These folks are from all walks of life, with diverse backgrounds, from different places, who’ve had myriad experiences, with unique perspectives.

More than a few of them have become my clients, since my work is hanging in the shop as well.

The group discussions in that place have not only been enjoyable, but enlightening. Just recently, one client on one table used to work for CN Rail while another on the next table currently does oil pipeline maintenance. In the midst of a political maelstrom of promises, disinformation and the online outrage of the election, that was one of the most informative (and civil) discussions I’ve had about media spin and partisan politics vs. the reality of natural resource safety, economics and transportation.

It gave me a new perspective and further reinforced that the world isn’t black and white, and the truth in most things is only revealed in the subtle shades of grey.

I’ve met more open-minded and tolerant people at Electric Grizzly Tattoo than I have almost anywhere else in my life. Organized religion and the political party faithful could learn a lot from tattoo culture.

Back to the tattoo show…

I had considered getting a booth at this show to sell my work, with the encouragement of my friends in the business, but I’m glad it didn’t work out. With the pressure of the election, getting cartoons drawn and sent, what it would have involved with stock ordering, prep and prints, the expense of it all, it was too much. I still went to check it out to decide if I might do it next year.

It was a good plan. While I enjoyed the experience, it really wasn’t the right place to sell my stuff, despite all of the talented artists in attendance. It just wasn’t my audience and it was a much smaller show than the Calgary Expo.

One side benefit, however, is that I got to hang out with an incredibly talented landscape photographer I’ve met through the shop. Wes isn’t a photographer for a living, but his landscape photos are some of the best I’ve seen. Wes heads out to the mountains and takes road trips on a whim, regardless of weather, and captures incredibly beautiful scenes.

While standing in front of a stage for a good half hour, waiting for one of the many contest events at the show, Wes and I caught up. I showed him my latest stuff and he showed me his latest work and I realized how much I missed seeing it.

I left social media quite some time ago because it felt like I was spending more time promoting my paintings than creating them, without having much to show for the time invested. I got sucked into the culture that says you have to be constantly posting CONTENT, even when you have nothing to post, just so that the people who follow you will see you pop up in their feed every day, because the all-seeing, all-knowing algorithm says so.

I also dislike being on my phone.

The second thing I learned, which is more of a reminder, is that there is no rulebook for being an artist for a living, or for life in general. You just do your best, try to be a decent person, make your choices and see what happens. And you can change your mind.

While I’m confident that I’ve closed the book on Facebook and Twitter, I’ve been mulling over the idea of giving Instagram another shot because of something I didn’t anticipate when I left it in February.

Basically, I miss seeing the work of many artists I admire and that’s how they choose to share it. I’m missing out on seeing work that inspires me. As for my own posts, I’m simply going to share stuff when I have stuff to share, just like on this blog or in my newsletter. I won’t be creating content just to have stuff to post, nor will I be paying to promote anything, because that requires a business account and a Facebook profile in order to pay for it. I might post a painting, then nothing else for two weeks until the next one.

This will mean less people will see my posts, I’ll get fewer likes and shares, but honestly, that kind of thing rarely generated any revenue for me in the first place. When I left Instagram the first time, only a handful of those followers signed up for my newsletter as a result, which speaks volumes about how invested many of those nameless, faceless followers were really interested in seeing what came next.

Everybody talks a good game online.

An art career is constantly changing and when the wind shifts, you adjust your sails and try to hold course, waiting for it to inevitably shift again. Sometimes you seek safe harbour from the storm for a while, other times you stand on the deck shaking your fist, hands tied to the helm, daring the tempest to sink you.

Why do I like nautical metaphors so much? I don’t even sail!

If I find in six months that my first instincts about leaving Instagram were correct, well then I’ll burn that bridge when I get to it.

I remain, as always, a work in progress.