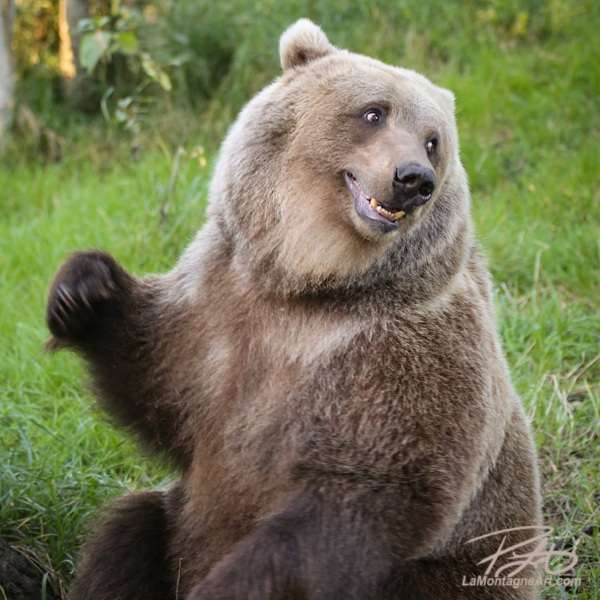 An opportunity recently came up to do a fall photo shoot at Discovery Wildlife Park. I got the text while hanging out at Electric Grizzly Tattoo here in Canmore, which Shonna calls my artist support group.

The owner, Derek Turcotte, and I have gone on drives into Kananaskis looking for wildlife from time to time, and both of us like taking our own wildlife reference photos. I’m always up for taking photos at the park, especially when it’s an official photo shoot. Derek was into it too, so I booked it. $150 each, which was well worth it, since the money goes to support the park.

We drove up on Saturday, leaving just after 3:00 as Derek was tattooing a client all day. Thankfully traffic worked out with no delays en route, because we were cutting it close. We just made it for the 5:30 start. Serena, Belinda and Nadia met us at the main building and took us down to the photo shoot area in their ‘limo,’ which is just a golf cart with extra bench seats.

Discovery Wildlife Park has created a staged area in the woods on their property. It was already a natural area, but they’ve added some rock and water features and the backdrop is the side of the gully in which it sits. Running along one side of the area is a long, tall fence. This is designed specifically for photo shoots and the mesh of the fence is large enough that you can put a lens through it.

Derek and I were joined by two women who had also booked the shoot and with only four of us along the fence, we had plenty of room to move about, didn’t have to worry about getting in each other’s way and the opportunities for great photos were limited only by our own skills. 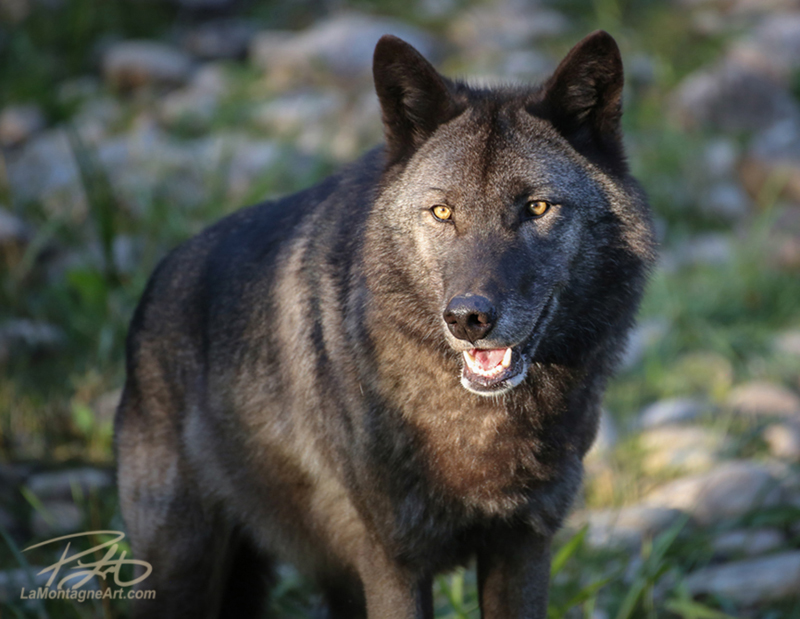 For the first part of the shoot, the wolves Nissa and Lupé were let loose in the large enclosure. Through positive reinforcement with treats and praise, they would pose on marks, run around together, play and explore. The light kept changing as it shone through the trees, creating natural spotlights which was wonderful when the wolves would be caught in one. 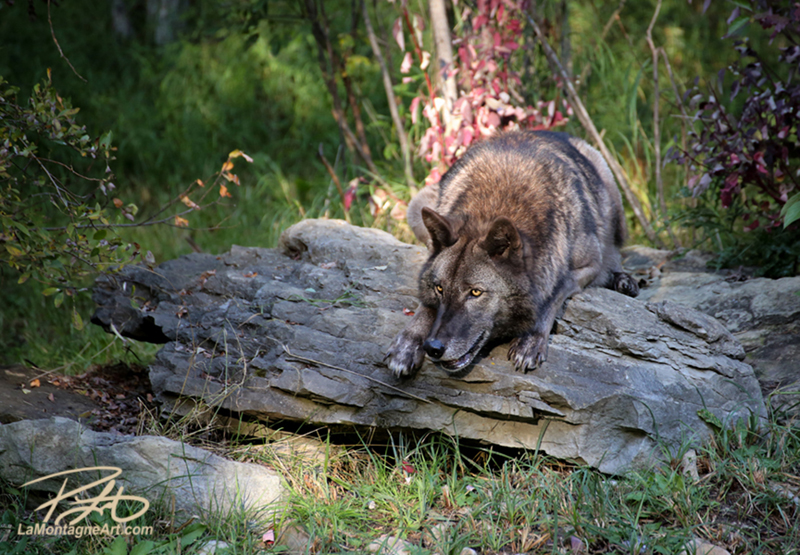 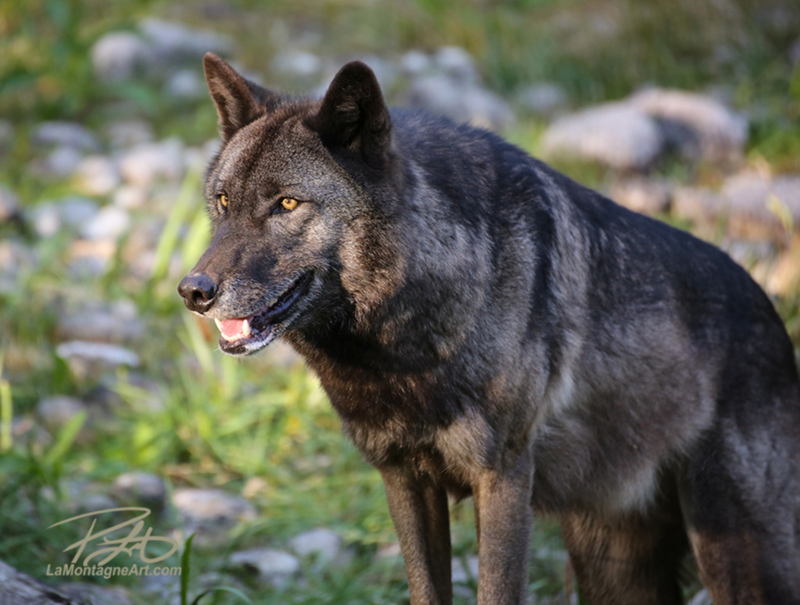 After the wolves returned to their own large enclosure in the park, it was time for Berkley to join us. 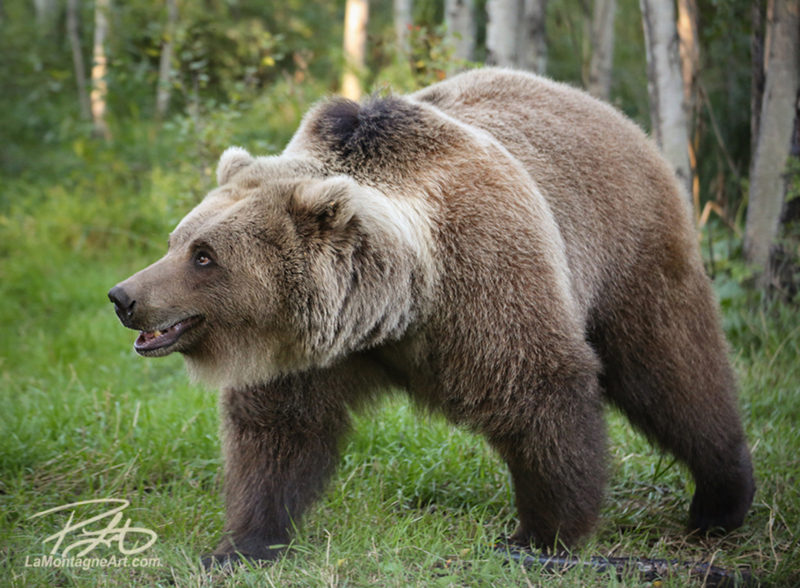 I last saw her in July and she has grown bigger still. She’s now just shy of 350 lbs and is really showing her adult features. While she still has her wonderfully expressive childlike face and lovable personality, it is easy to see the big bear she will eventually become. 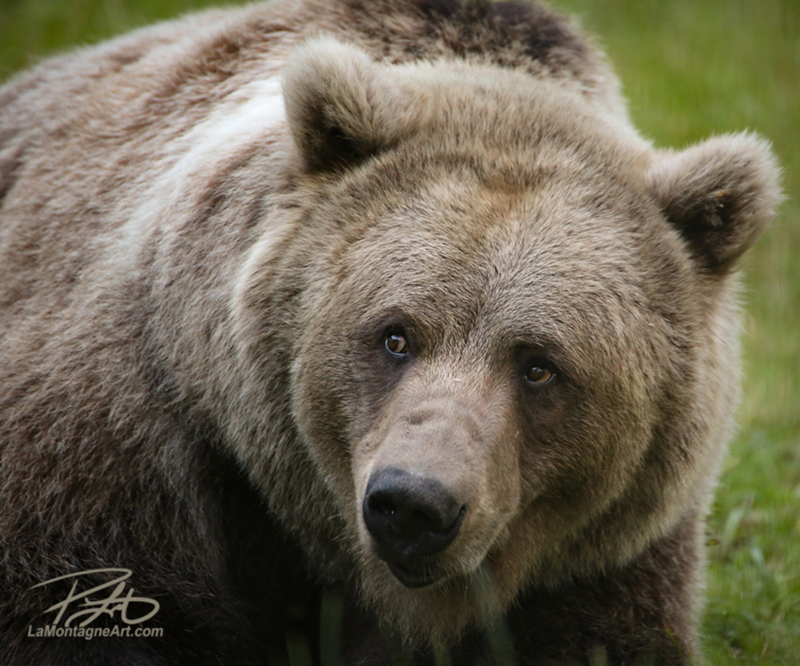 As I’ve mentioned before, it is always a pleasant surprise when she recognizes me and wants to visit. At first, she ran into the enclosure and I could see her coming around the top on the other side of the trees. She moves really fast when she wants to and came barrelling down the path beside the fence. When she got to where I was standing, she slowed right down and did a double take as if to say, “Hey, it’s you!”

That never gets old. 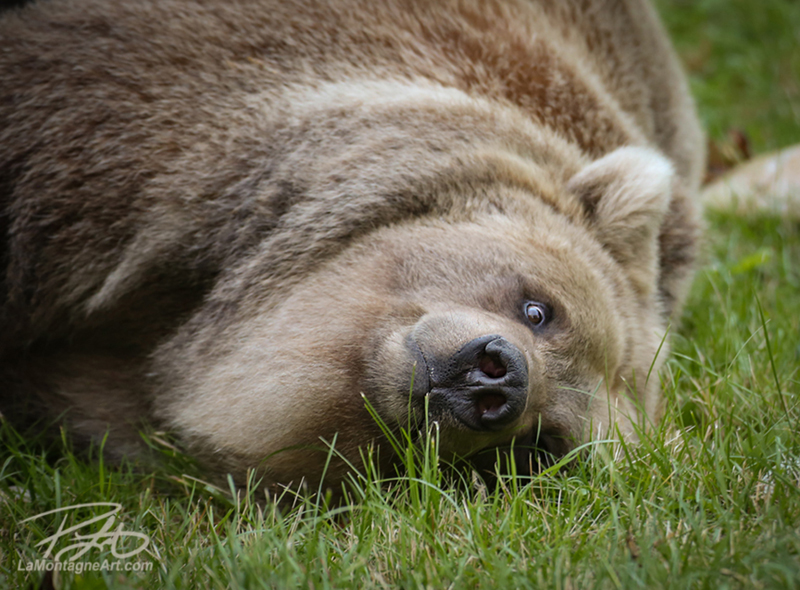 Of course, it did present a little bit of a problem when it was time to take pictures, because Berk just wanted to visit. Telling her to go see her Mom didn’t work, and Serena basically had to scold the four of us to stop talking to her, or we wouldn’t get any pictures.

We had to ignore her so that she would go to Serena, but once she did, she had a great time. From attacking trees, to playing on the large rocks, following Serena around and doing tricks for treats, my camera shutter just kept going rapid fire. 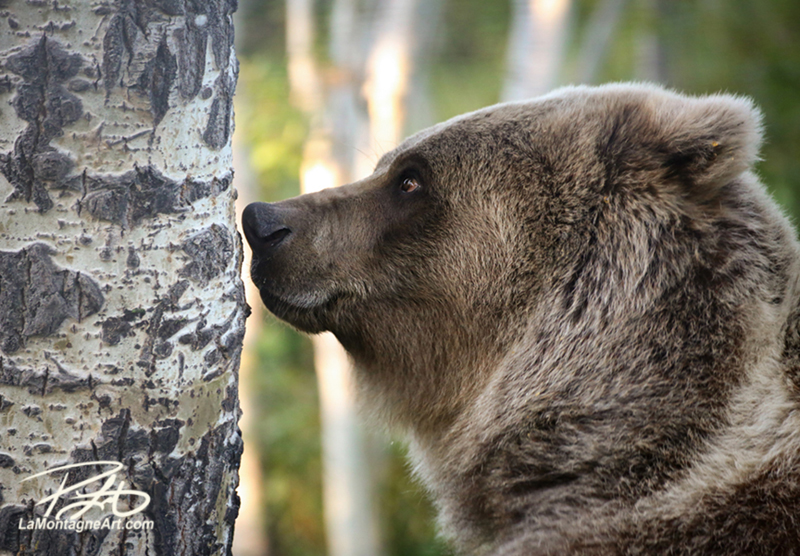 Sure, Berkley would occasionally look my way and then come over, but I just had to stand up and turn away for her to forget the distraction and go back into the middle of the enclosure. I felt bad for doing it, but I still got plenty of visiting time with her a little later on and before we left. 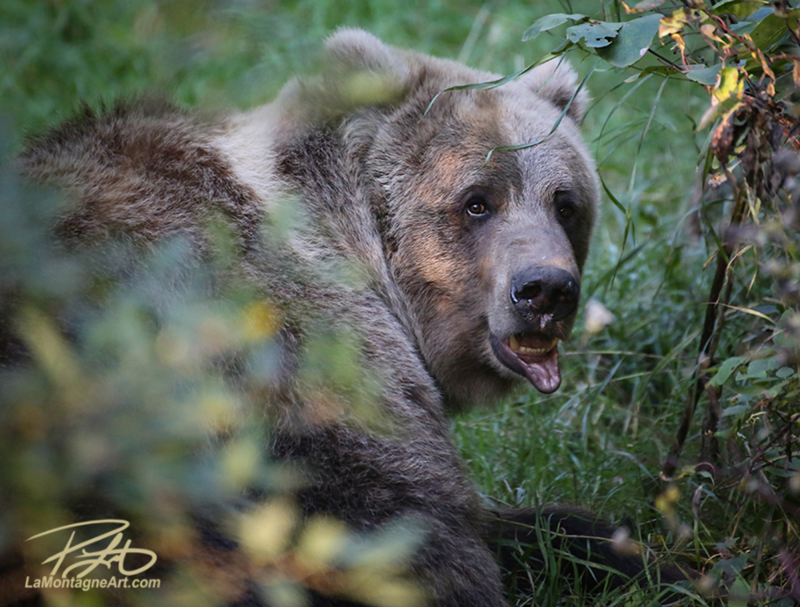 Derek was pretty thrilled to be that close to a grizzly bear, as were the other two photographers. I realized that I’ve gotten a little too used to having so much time with Berkley, that I forget what a unique privilege it is to have a (not-so) little bear friend. There’s nothing like looking into those eyes and that wonderful face.

Derek told me he wasn’t sure if I’d been exaggerating how much Berkley ‘knew’ me or not, so he got to see that first hand. He said it was great to finally see the place and meet some of the people I often talk about, and now he knows why.

With the light in the sheltered photo area fading enough that it was getting difficult to get any more good photos, Berkley left us and Serena offered us the opportunity to take some photos of Gruff, as his enclosure is up on the main flat area of the park, so we still had ten minutes of light to work with. 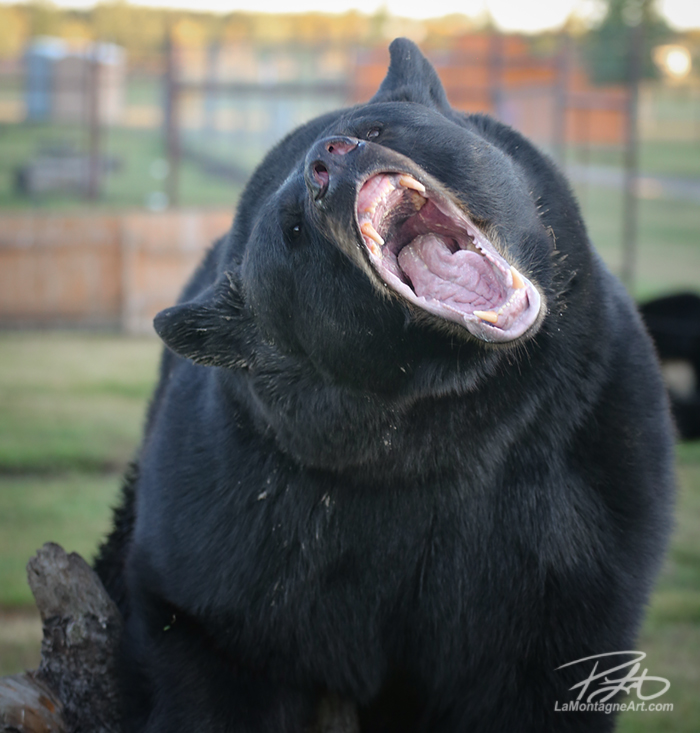 Derek was primarily looking for tattoo reference and for his own painted work, so Gruff performing his scary bear impression was something he was excited to get. Even though I just painted that very expression, I took some more photos and think I got even better reference of that than the last time. Might be another painting coming one day.

Although it required a four hour round trip drive for two hours at the park, both Derek and I felt it was well worth our time and we’ll do it again next year when the opportunity comes up. The fading light and sometimes fast motion of the wolves and Berkley created some photography challenges that resulted in more lost shots than we would have liked, but that’s part of photography, and life in general. You learn more from the mistakes and failures than the successes. Whether it’s taking the photos or painting from them, there’s more to learn than I will ever have time for in this life.

I took over 2600 photos, and after a few hours of going through them yesterday, ended up with about 100 worth keeping, including quite a few that will work as wonderful reference pics for future paintings. 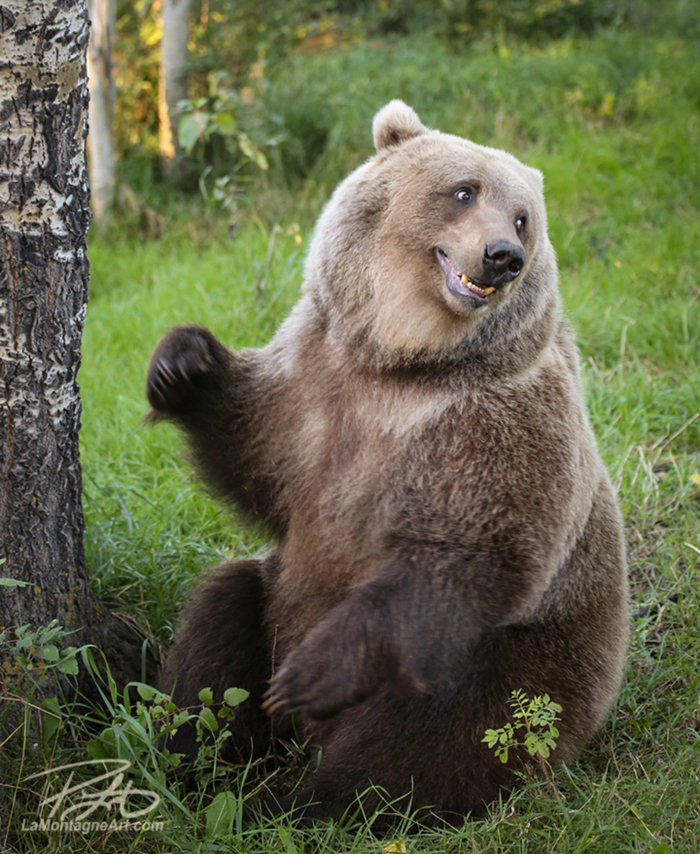 I don’t know if it’s the last time I’ll see Berkley before she goes down for hibernation, but if it is, it was a nice visit on which to end the year. Discovery Wildlife Park closes for the season after Thanksgiving, so if you’re in the area, there’s still time to see the animals before that.