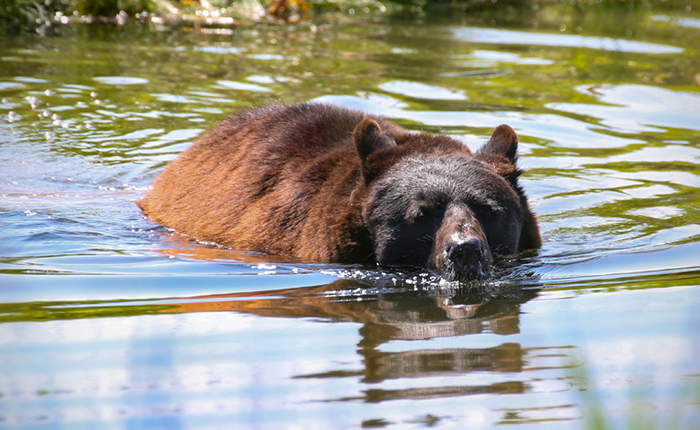 Thursday was a really good day, so much so that I’m splitting it up into three blog posts. This is the first.

I’d already had high hopes, as I was dropping off a $525.00 donation to Discovery Wildlife Park, made possible by followers of my work who took advantage of the first offering of the matted giclée prints of my painting of Berkley. Not only was painting that image a lot of fun, but selling the first twenty (ended up being twenty-one) with proceeds going to the park made it even more special.

Charitable giving is probably one of the most selfish things a person can do, because it just feels so darn good. Now this donation isn’t exactly hard-core philanthropy, but that is where I’d like to end up one day, supporting animal causes with as many big donations as I can muster. If I have to exploit those who like my work in order to do it, I’m OK with that.

Hopefully you are, too.

I wanted to get to the park when it opened, but some email issues delayed my departure from Canmore, so I didn’t arrive until after 11. By that time, special programs are underway and the place is getting busy, so I knew not to expect to be able to have any time visiting with the staff as their work day was in full swing.

I delivered the first poster prints of Berkley to Debbi, one of the owners, along with the cheque and a framed matted Berkley print, the one I used for the donation. I sent Serena, the head zookeeper, a text letting her know I was there, but she was out with the kids’ camp, a Zookeeper for the Day program. Told her I’d be around taking photos, but I knew they’d all be busy. If I didn’t see any of them on Thursday, I was fine with it.

I stopped by the Tiger presentation that was just starting, then went over to check out the wolves, the ostriches, deer, and of course, the black bears.

It was a HOT day, I was sweating under the sun, and figured the black bears would be trying to stay as cool as possible. Dark fur on a sunny day, they really should know better.

Imagine my surprise when I saw Gruff actively playing with an orange ball in his enclosure. He’s the bear I used as the model for my Black Bear Totem painting. I was fortunate to be able to spend time inside his enclosure with him to get the reference shots for that, an experience I won’t ever forget.

He’s a wonderful bear with a great temperament and I thoroughly enjoyed watching him throw the ball in the air and chase it when it hit the ground. He has this habit of covering his eyes when he throws it up, likely had it land on his face more than once, I think. As I was taking shots zoomed in through a double fence, I couldn’t get a good enough shot of him standing up when he threw the ball, but here are a few of his antics on the ground.

Given that he must have been getting warm with such activity, I wasn’t surprised when he went for a swim in the pond inside his large enclosure. I’ll admit to being envious. I heard one woman say to another, something about how great it was to see the bear so happy and playful, clearly well looked after. It’s nice when other folks recognize what I already know from my experiences here. These animals are loved.

When he finally did come out of the water, he went back to his ball, but he seemed to have used up most of his energy prior to his swim and lay down in the sun. At this point, having been there for an hour, I was thinking I might leave, go see my folks who live just ten minutes down the road, and then head into Red Deer to deliver the last of the Berkley prints, with plans to come back the next morning before heading home.

But I got a text… Serena picked me up in a golf cart, and said I had a ten minute photo shoot before she had to get back to her duties. I asked what I would be shooting and she simply said, “a baby.”

She wouldn’t tell me, said it was a surprise, but that I should change lenses on the way. I wouldn’t need the zoom lens.

She drove me back to the keepers’ area where some of the smaller animals are kept at night and I told her I hoped it would be a skunk because the Alberta Institute of Wildlife Conservation (another facility I support) keeps posting pictures of skunks they’re rehabilitating and I want to paint one. The problem is that AIWC re-introduces animals back into the wild, so they don’t allow visitors to come and take photos, which is completely understandable.

Sure enough, I was introduced to Tunk, one of three baby skunks they’ve recently adopted when a farmer decided he didn’t want them around. Oreo and Flute are the other two, who I saw, but they’re not quite socialized yet, so Tunk was my model. Serena placed him in the grass surrounded by yellow flowers. While it was a great setting, and I was lying down, taking rapid fire photos, he was rambunctious and I couldn’t get any good pics. So we took him to a nearby broken tree and let him run around a bit on top of that for a very fast photo shoot. I’m glad he’s had his scent glands removed, because I found myself looking at the business end of this little critter more than once and the possible consequences crossed my mind.

Baby skunks. What a treat. Had the day ended there, I would have been quite pleased. But then I was invited to return that evening for…