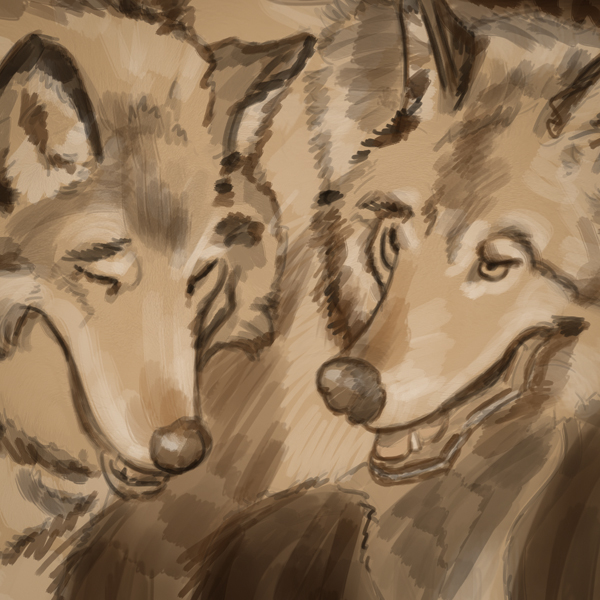 One of the most common questions I get about my painted work is, “how long does it take to do one of these?”

The glib Picasso rip-off answer is, “a lifetime,” most often hauled out when people question an artist’s pricing.

For one of my whimsical wildlife portraits, the answer is usually somewhere around 15 or 20 hours which is just a ballpark. I don’t really keep track because I don’t paint something in one sitting. There’s always other work being done at the same time, the daily editorial cartoons, admin work, and the like.

Something that took me 15 hours a decade ago, however, would likely take me less than half that, now, because I’ve become a better artist in that time. Concepts I found difficult then are routine techniques now, allowing for more detailed work in the same amount of time. This is why many artists don’t offer hourly rates, because the better you get, the quicker you get something done, meaning you’d make less money. It doesn’t make any sense that I should be paid more as a beginner than as an accomplished professional.

Because my licensing clients and customers like them, and I’ve now got a large portfolio that sells well, I’ll still continue to create the somewhat caricatured single head-shot style animal paintings. Like most artists, however, I get bored with my own work and want to try new things. That’s what led to my funny looking animal pieces in the first place, an experimental painting ten years ago.

From gathering the reference, to sorting through them, looking for the one or two that sparks an idea, to sketches and false starts, paintings take time. Posting a new piece every week would only be realistic if I didn’t have editorial cartoons to draw each day. 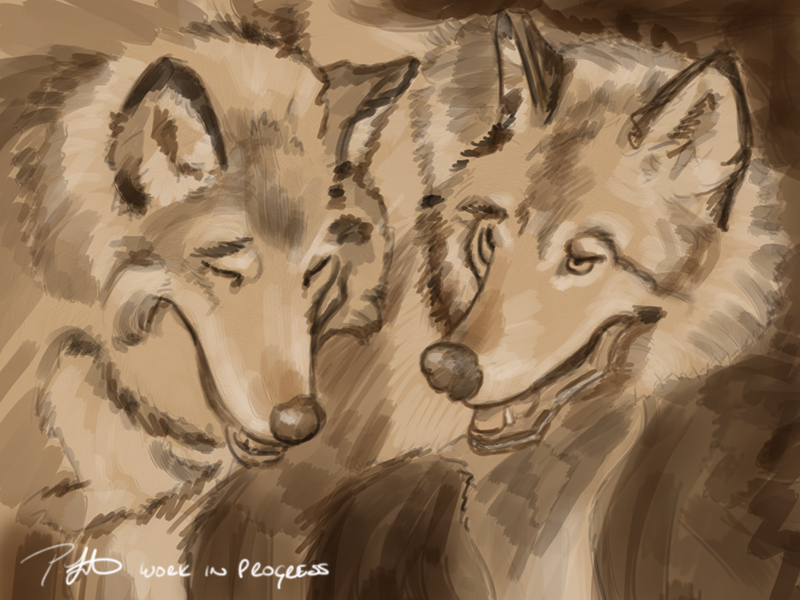 With that in mind, here is the beginning of a new painting, just started this morning. When I still had a social media presence, this is the kind of thing I would share just to have something to post, in the mad scramble for likes and shares. Now that I know that sort of thing doesn’t really translate into anything more than a higher level of anxiety, I hadn’t thought of posting work-in-progress shots on the blog. Since somebody told me recently that they missed seeing them, well why not?

Besides, it’s humbling to post stuff like this, because it has barely begun, which leaves me feeling exposed. I guess that’s the whole point, to illustrate (wink wink) that a painting doesn’t just happen. It starts with the broad strokes, the roughest of layouts, with many hours working alone, before ending with fine little hairs under the eyes and droplets of moisture on the gums. That moment when the personality shows up, that’s many hours down the road.

Incidentally, at the beginning of every painting, which is what you see here, I always(!) think that my best work is behind me, that there is no way my skills will be good enough to match the vision I have for the piece, and that it’s just going to suck. Go get a real job, you imposter hack, you’re not fooling anybody.

Every painting starts with this fear, and almost every artist I know suffers from this same panicky self-doubt. This is why dealing with internet trolls has always felt like amateur hour to most of us. The trolls who live in our heads are so much nastier, and unlike Twitter, you can’t block them.

All that said, these initial steps on a new painting, it’s a familiar wasteland of unfinished work and I’ve traversed it many times before. Turning back just isn’t an option and I’m looking forward to seeing how this piece turns out.