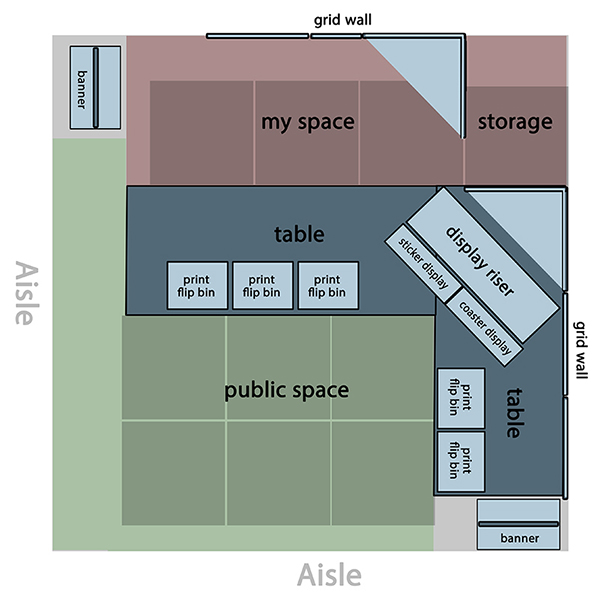 The reason I’m sharing info about my Calgary Expo preparation is two-fold. First, I find the behind-the-scenes of other people’s professions interesting, so maybe some of you will, too. But more importantly, when I first began doing this show, I had generous help from practiced vendors, so if my experience can help somebody else, I’m happy to share it.

In my last post about the Expo, I talked about the costs of a booth at this show. You can read it here. 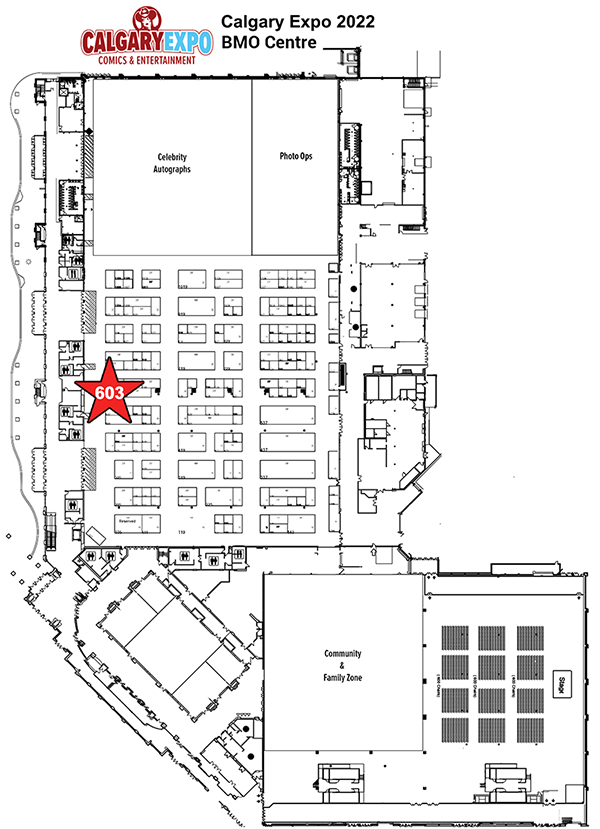 While later than I’m used to, and after an initial mistake on their part, I have my booth assignment for this year’s event. I’m pleased with the location. Booth #603 is on a main thoroughfare at the front of the show, between two sets of main doors and next to the bathrooms, which means I can expect a lot of traffic. 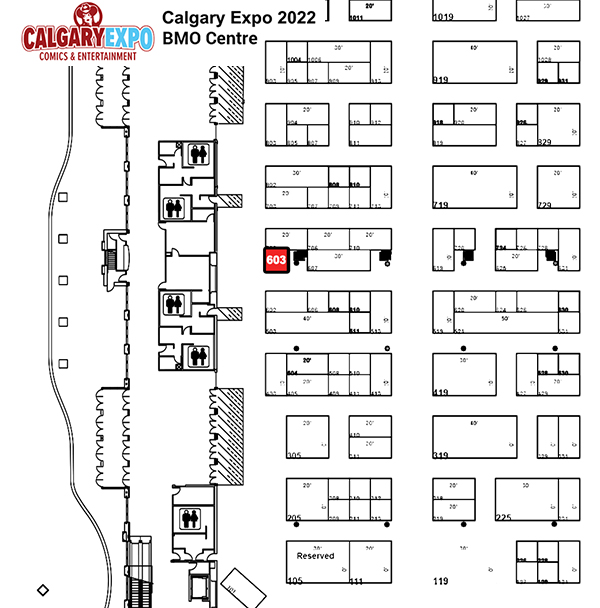 In addition to this floor plan, there is a second building for Artist Alley which looks to have a couple hundred more vendor tables.

Last time, I had an open concept booth. I would greet people, welcome them into the booth, then step aside so they could flip through the print bins, look at the table displays and browse the pieces on the grid walls.

I’ve changed things up this year, primarily because of the pandemic. While many of us are excited to be out and about again, it’s been a rough two years. There might be no more mask mandates or vaccine requirements in Alberta, but I’m still seeing plenty of masks in the grocery stores and people keeping their distance. Each of us has our own comfort level.

Masks have always been common at this event, but only because many arrive in various levels of costume. It’s also one of the most accepting and tolerant events you’ll ever find, where people of all walks of life can be themselves. Because of this live-and-let-live atmosphere, I don’t anticipate anyone coming to this event intent on a political disagreement over face masks. I plan to wear one, but I won’t be making an issue of it.

At the Mountain Made Markets here in the fall, people seemed more comfortable at my booth with a table between us. I know that I was. So, I’ve redesigned my booth to allow me some personal space while still offering plenty of access for people to peruse the prints and other items.

I store my extra stock under two skirted tables and on a shelving unit in a hidden corner. That’s not a lot of real estate. Last year, I had to wait or politely ask somebody to move so that I could retrieve that stock and replenish the tables. It wasn’t easy when it was busy. This time, I can do it from behind the table without disturbing anyone looking through the prints.

I’ve often done partial setups of the booth in my garage to work out any display and layout issues. This year, I made a scale layout in Photoshop instead. It took a lot less time and allowed me to shuffle the pieces without having to physically move tables and grid wall. I know my equipment well and no longer need to set it up in advance. 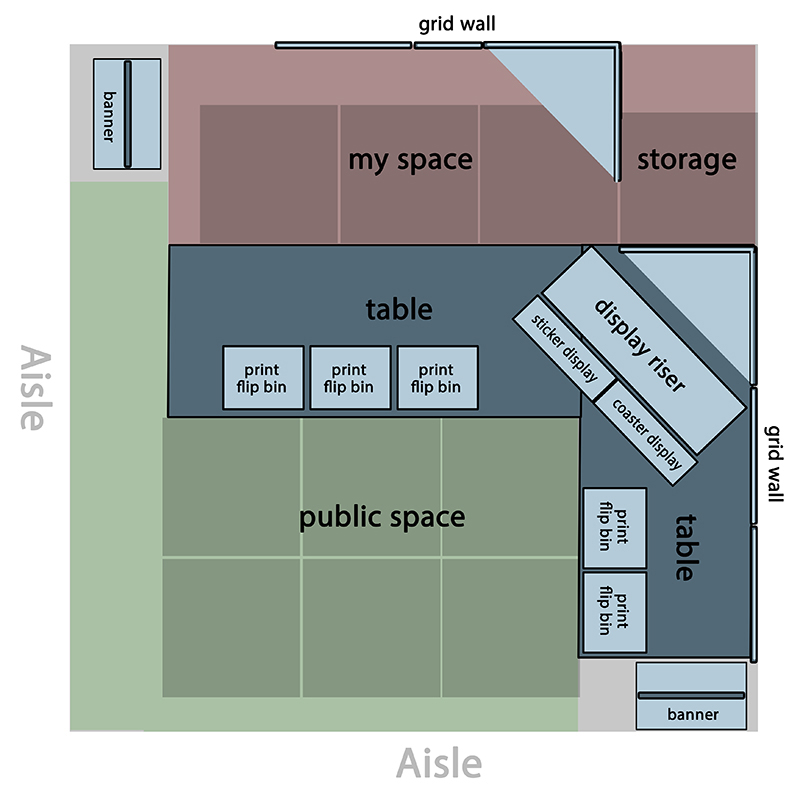 Because I’ve painted over 100 of my whimsical wildlife pieces, and so many of the early ones are still popular, it’s tough to know which to keep in stock and which to retire.

Writers often get too attached to characters or scenes and fail to see how eliminating them will strengthen the overall story. More experienced writers know that you need to ‘kill your darlings.’

It’s the same with retiring paintings. I’ve spent many hours on each one, and I get attached to them. Eventually, I must accept that some paintings don’t resonate with my audience or those who do like a piece have already bought it. As I’m painting new ones all the time, I need to make room for them.

I have only a few prints left of my first Grizzly painting. It has been a consistent seller for years and continues to do well in licensing. But I’m always painting more grizzlies. So it’s tough to admit that it’s time to retire the painting that started it all.

Remember that expense and inventory Excel spreadsheet I wrote about in the last post? That also tells me how much of each print, magnet, coaster, aluminum, calendar, canvas, and other items I’ve sold at previous Expos.

I’ve currently got prints in stock for 43 paintings. Just five of each adds up to over 200 prints if you think about it. It’s a rare year I don’t sell at least one of every print, but to bring 20 of each would not only be overkill, but I don’t have the room in the car or the booth. 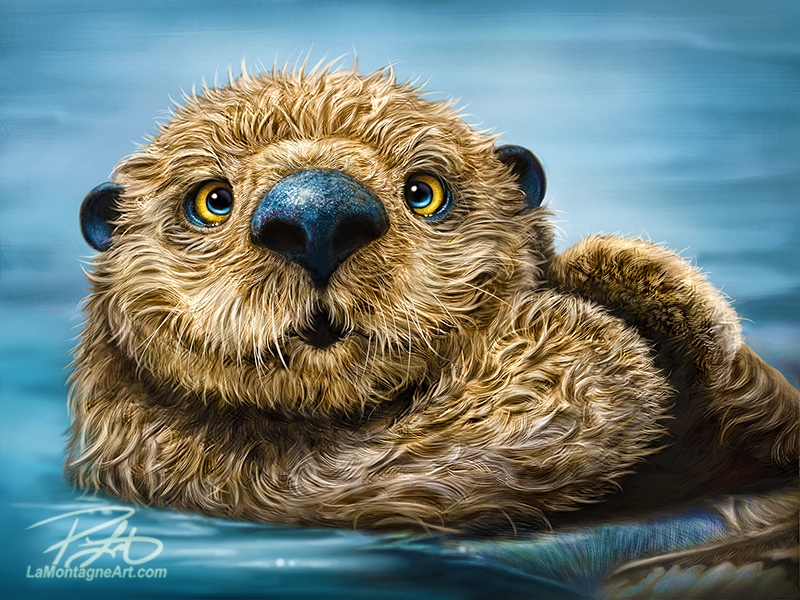 Some years, I’ll sell in the double digits of a few proven pieces. But what’s popular one year might be crickets the next. For several years, my Otter has been a consistent bestseller, thriving on every retail item on which it appears. Yet, at Expo 2019, I sold only two prints of that one. But I sold nine Ostrich. Go figure.

A challenge for this year is that I’ve painted more than two dozen new pieces since the last Expo. So I had to decide what to bring based on subscriber feedback, online sales, orders from retailers and best guess.

In addition to print inventory, I had to decide which coasters, magnets and 8X10 aluminum pieces to order from Pacific Music & Art. I based that on the last Expo and the Mountain Made Markets I did here in Canmore before Christmas.

Canvas prints have a heftier price tag, so while they sell at Expo, I don’t move a lot of them. But they look great displayed on the grid wall, and it’s these well-lit pieces that bring people into the booth.

Since I’ve already got a bunch of canvas, I chose to top up those display walls with metal prints, as they’re impressive, and I’ve had positive feedback on them. So, I’ll have an equal number of those, including three large 18″ X24″ pieces.

The nice thing about all this stock is that it doesn’t expire or go bad, and I have other regular customers for this inventory. The prints are sold to the Calgary and Toronto Zoos, Discovery Wildlife Park and in my online store. The stickers are now sold in retail stores, and I’m actively looking for more of those clients. I’ll also have another booth at the May 21st Mountain Made Market at the Canmore Civic Centre.

Ordering this stuff is still a significant financial commitment and a calculated risk. But, unfortunately, it’s the nature of self-employment, and life in general for that matter. All you can do is base decisions on available evidence, weigh the odds, take a leap, and hope for the best in our current uncertain economic climate.

My next post will be the wrap-up after the event when I let you know if the show measured up to expectations or hopefully exceeded them.