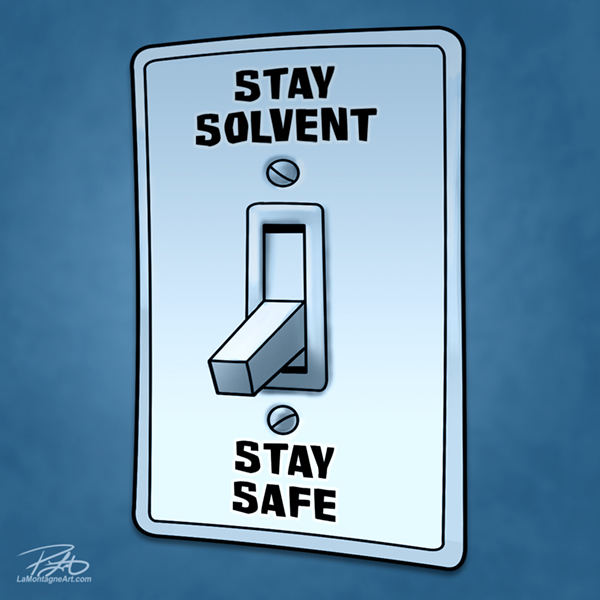 If you’re wondering why you haven’t seen any new paintings in the most recent posts, it’s because I’m having trouble focusing on that. I did get up at my usual 5 am with the intention of painting this morning. I’m in the early stages of a little Corgi right now, but not making any headway. Instead of painting, I ended up surfing apocalypse news stories, brainstorming cartoon ideas for the only topic in town, and fretting over finances.

I’m sure that most people are doing the same thing, minus the cartoon idea part. That’s pretty specific to my profession.

This kind of ruminating and brow-furrowing is unproductive, bad for business and even worse for mental health.

How many of you are sleeping well right now?

One thing that will come out of this, for the businesses that survive it, will be some interesting innovation, born of desperation. Many are trying to come up with new ways of making money to stay afloat, some I’ve seen are rather clever. And I think when this is over, a lot more people will continue to work from home, for companies that find it benefits their bottom line.

While they haven’t announced it yet, much to the growing impatience of vendors and attendees, the Calgary Expo is undoubtedly a wash this year. There’s no way this will be over in a month, at least not to the point where 90,000 people are going to want to get together in extremely close quarters. If you’ve ever been to a convention that size, social distancing is impossible. All the hand sanitizer in the world won’t help you in that Petri dish.

Since I’ve got plenty of stock right now, I’m going to assess my options and hope to have some specials and deals to announce in the next few days. I know extra funds are in short supply right now, but there might be something enticing for you.

As a recent customer said in the memo section of his order, “I’ve got to have something to look at while in quarantine.”

In the meantime, I wrote another post for Wacom this week, 9 Tips for Working at Home for Artists.  Even if you’re not an artist, give it a look, especially if your work and home are suddenly the same things. 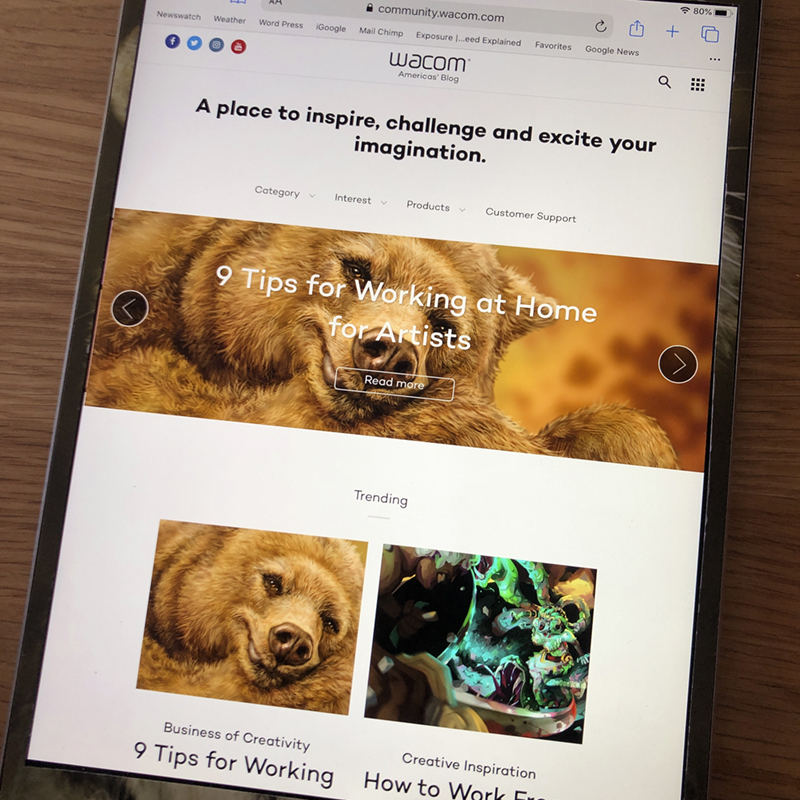 Hopefully, I’ll find my painting mojo soon, but it ain’t happening today. I’m probably going to tidy my office and do inventory.

Hope you’re all well and making what you can out of this overabundance of uncertainty.

The key to being creative is to find a way to break out of your routine.  By staying where you are, by taking comfort in the walls you build around you, you don’t free your mind, you enslave it.

Working at home, I feel safe.  This is my domain, the place I own and control, even if it’s only an illusion.  I can turn off the phone, close the blinds, lock the doors, and cut myself off from the world.  In that environment, I can create in complete solitude and safety, uninterrupted, exploring my imagination.  And I like that.  Most of the time, it works for me, especially when the goal is to get work done.

But even though silence and isolation can bring peace to a busy mind, allowing the elusive quiet thoughts to be heard and explored, imagination needs stimulation, too.  For that, one needs to go out into the world.

Draw from life.  I’ve heard that so many times from so many artists that I can’t even give credit to any one person.  If you ask me to draw a tree, a dog, a building, a lamppost or anything else, you’ll probably get a rendering that will look pretty much like what you ordered.  Everybody knows what a tree looks like.  But no two trees are the same.  The only way to see that is to go look at them.

Draw from life.  That means going out among the living.

I like coffee shops, especially ones with corner booths or seats.  If I can put my back to the wall, make myself small, become unremarkable and unnoticed, then I can sketch people as they go about their business, natural and unaware.  Propped up on elbows, heads in hands distorting faces, scowls or smiles while they read, backs hunched, faces quiet in thought, legs crossed or up on chairs, heavy sighs, changing positions, settling out of their routine.  No posturing.  No posing.  Just there.  That’s life.

Shopping malls, especially in the food court.  Up high, looking down on the unsuspecting masses walking by.  On a bench removed from the crowds, but still on the periphery, able to observe without being observed.  Laughing, talking, tired, driven, meandering, texting,  kids tugging on parents, parents clinging to that last nerve, couples holding hands,  husbands sitting on benches looking bored as they wait for their wives to come out of a store.   Sketches have to be quick in a mall.  People don’t stand still for long.  It’s all about catching the feel of what you’re looking at, not so much the details of every fold of clothing, every wisp of hair, but the shapes and structure, the lights and darks, the hard lines.  You see them, take a mental snapshot, sketch and they’re gone.

Airports are wonderful.  People are just waiting and most often they don’t really want to be there.  No matter what people say about the journey vs. the destination, few people enjoy killing time in airports.  But they sit, they stand, they drink coffee, they read, they doze off, they browse in little shops for things they don’t need and they watch the time.  And artists draw them.

Parks, lakes, hiking trails, campgrounds, people hold themselves differently in natural places.  A little less rigid, time to think.  You’re less likely to see them texting or talking on their phones, at least you hope so.  Ties and collars loosened, jackets open.  Bagged lunches open on a picnic table, eyes a little glassy.  Heavy sighs releasing the tension, enjoying the sunshine.   Throwing a ball for the dog.   Arm draped over a bench, legs crossed.  Lying on blankets.  People use natural places to escape, sometimes only for a few minutes.  But it’s better than nothing.

I like zoos, too.  Where else do you get to see animals from the other side of the world?  A lion basking in the sunshine, his face suddenly erupting in a yawn as he falls over for a nap.  There’s a feel to that scene you don’t see in a photo and it helps to sketch that live, in person, breathing the same air and trying to share the same feeling.

My buddy has a cabin in British Columbia.  For years, he has allowed his friends to use it and it never fails to inspire me, even if sometimes I don’t realize it until after I’ve returned home.  Up in the woods, rustic and most importantly, quiet.    Little curiosities and knick knacks adorn the place, gifts left by guests, photos tucked into mirrors, half melted candles stuck into wine bottles that were probably opened and enjoyed in that very place many years ago.  I love being there because it’s a change of scenery and it’s peaceful.  When I draw there, it’s almost always something different than I would draw at home.  So a change of scene is sometimes all that’s required to reveal those hidden creative alleyways and roads less traveled.

I’m rarely without a sketchbook. Many times it may stay in my pack or in the car, but too many times to count, I’ve been able to steal five minutes in one place or another to draw what I see.   It’s just not the same thing to snap a photo with a smart phone.  Later, when you download the photo and try to sketch it, you won’t be able to put yourself back into the place, and feel what you felt that compelled you to take the photo in the first place.  You might come close, but it won’t be the same.

The trick to drawing from life is to try to be removed from the scene.  If the person you’re sketching sees you and has even the slightest inkling that you’re focused on them, they will change and you will have lost the natural posture that drew your attention in the first place.   When that happens, move on.  The moment is gone, but another is close by.

Sketching is practice and need not be shown to anyone else, and it certainly doesn’t need to be finished.  Different perspectives, capturing moments, opening yourself up to possibilities you might not have considered.  You can’t do that by existing in the same place day after day.  It’s not always easy.  I’m just as guilty as the next guy of being too busy to take an hour or two to just sketch.   It takes effort to change habits, and if at first you don’t succeed.  Well, you know.

Gestures, sketches, drawings, paintings.  All of these can be done in the studio.  But if the studio doesn’t change or grow, neither will your art.