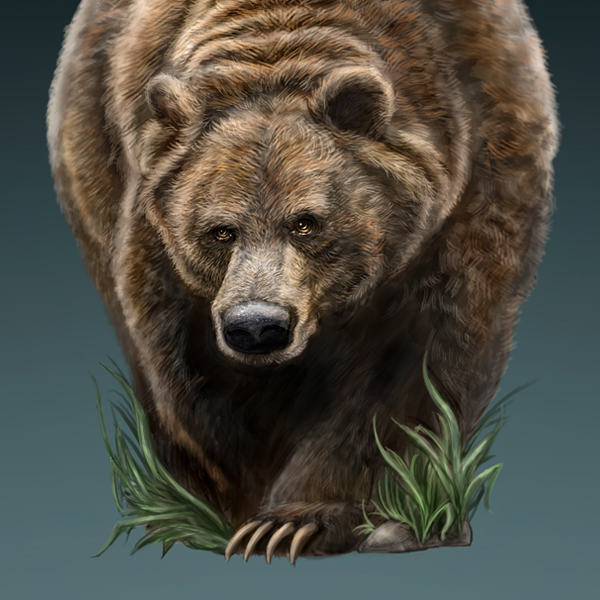 Twice last week, while working on my latest Grizzly on Grass painting, I got an idea for a post. Instead of simply jotting it down, I ended up writing a thousand words. Before I knew it, I thought, “wait, wasn’t I just painting?”

Winter is nose to the grindstone time for me; low on inspiration and motivation, putting in the hours to get the work done. Spring is the opposite; an abundance of nervous energy, plenty of ideas and not enough time for all of them.

Not having enough ideas is bad, but having too many can be worse, especially when all of them seem important. There is the fear that if I don’t address these lightning strikes right away, I’ll have lost whatever mojo that made it exciting enough to stop painting in the first place when I finally do get to them.

While it certainly wasn’t a comfortable time, my worst fears didn’t materialize, so all of that worry was a big waste of time, as worry usually is.

I must now be used to this new base layer of uncertainty because this year, the spring high thankfully showed up. I’ve got many things I want to do, not enough time to do them, and I must prioritize what’s important.

As I talked about in a recent post, marketing my work and looking for new ways to get the word out has become one of those priorities. David Duchemin has opened my eyes to possibilities I hadn’t considered, and now I’m seeing them more often. There are plenty of little ways to improve my marketing efforts. Lumped together, it seems like a monumental effort, a mountain to be climbed. But you know what they say about the journey and single steps.

Besides drawing, painting, and writing, I’m trying to add a bit of marketing every day, either research or actual implementation.

Here are a couple of recent changes that I hope are improvements. 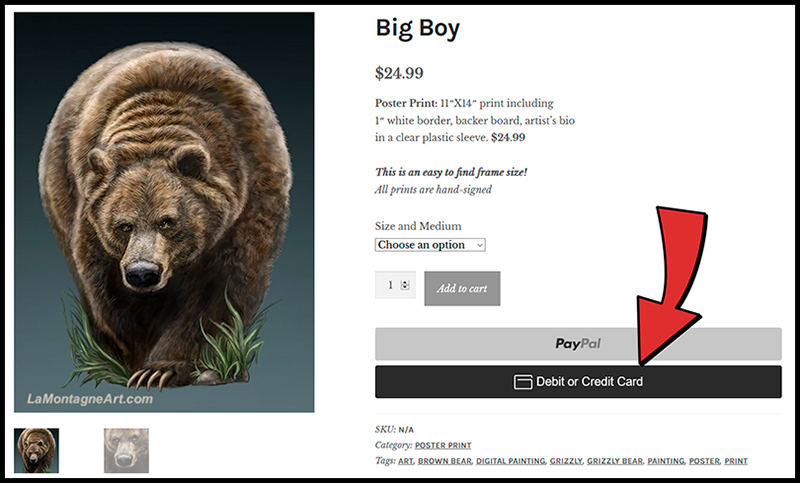 If you don’t have a PayPal account and want to buy something online from an independent seller, it’s clunky to go to the checkout on the site and then keep going when you find you have to set up another account somewhere else.

For some, it’s one step too many and leads to cart abandonment, which translated for the site owner, means you just lost a sale.

Shopping is supposed to be easy.

PayPal is the most popular online payment method, and plenty of people have an account, but if you don’t or don’t want to use one, I’ve tried to make my online store a little simpler at check out.

As of yesterday, in addition to the usual PayPal option, you can now checkout directly with your credit card. My site was already well secured, and while the back-end payment engine is still PayPal, it will no longer take you to another site to process payment; it will happen right in the shopping cart.

Better still, if you’re looking for a specific print, you can now buy directly from the item and bypass the cart process entirely.

Blogs were a big thing in the early/mid-2000s. I’ve had mine since 2008. Over time, they seemed to fall out of fashion, criticized for something that old people did. In recent years, however, I’ve been reading about their resurgence. With so much content online, people are again more interested in the stories behind the work and long-form articles. The wheel has come around again, and blogs have integrated with newsletters.

I kept my blog going all of these years because I enjoy writing. I don’t remember when I turned off the comments, but I certainly know why.

Before Facebook and Twitter became the polarized sewers they are today; there were still people who wanted to turn every available comment opportunity into a forum for their political or social grievances, regardless of where they were.

My early work’s foundation was editorial cartooning, so my work attracted quite a few trolls long before that term was in widespread use. The same people would show up on my site and accuse me of being in bed with one political party or another, regardless of what I posted. When it was just on the editorial cartoons, I tolerated it because I felt it only fair to allow a rebuttal to my own illustrated opinion.

That was back when I would foolishly engage in political discussions with strangers. Live and learn.

As my work became more diversified and I’d paint caricatures of celebrities or illustrations for board games, those same commenters would still have something to say, and often it had nothing to do with the post. They had just become used to my site being somewhere they could spew whatever bile they had thought up that day.

When these same people began to drive away others or tried to start an argument with followers in my comment section, I’d had enough and disabled the comments. Think about it, if you were about to check out a retail store and saw people inside having a loud argument, would you go in or keep moving?

That’s also why I deleted my Facebook page and Twitter account. Because Facebook and Twitter are now notorious for anger and bitterness, with people posting and repeating their political agendas all over the place, it’s easy for artists and other self-employed people to get caught in the crossfire, with little means of controlling the damage.

The upside of all that vitriol concentrated on social media is that blog posts like mine are no longer attractive venues for political opinion carpet bombing. People who engage in that type of recreation want as many eyes on their rage as possible and social media is their preferred playground.

Now that I’m focusing more on serving my audience, I thought a little more engagement might be beneficial. People send me emails all the time, something for which I’m grateful. I try to respond to each one. But as my work gets more popular and my audience grows, it can be a little time-consuming. Comments are one way I can still hear what my audience has to say, what they like and what resonates with them, but they might not always require me to reply.

In the end, all of this stuff is an experiment, anyway. I could suddenly be inundated with spam or inappropriate comments and might have to turf it all again as I did before. I hope that doesn’t happen, and I’d like to see it become one more small improvement to the overall enterprise.

Time will tell. With fingers crossed and happy thoughts, what do you think? Feel free to comment below.

2 thoughts on “Spring in My Steps”