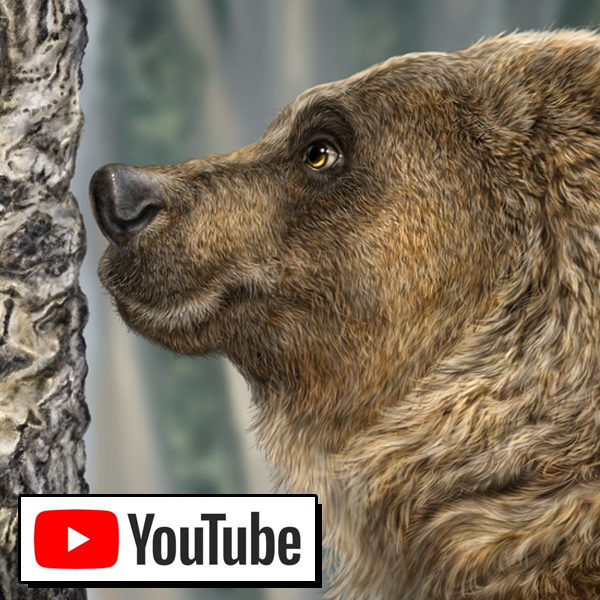 Here’s my latest piece. I call it ‘Staring Contest.’ This is another painting of Berkley from Discovery Wildlife Park. I took the reference a couple of years ago, the same day I did for one of my favorite pieces, Grizzly on Grass. I love painting this bear. Spending time with her was, and continues to be, a highlight of my life. I’m forever grateful to Serena and her staff for that privilege. Below is a time lapse video of this piece, from start to finish, along with narration to go with it. The text for the voice-over is below the video if you’d rather read than listen to it. Thanks for being here.

Every artist is familiar with imposter syndrome. It has now become a cliché that’s right up there with the overshared quote about doing the same thing over and over again and expecting different results.

We compare ourselves to other artists and not only feel like we don’t measure up but that we never will. It’s easy to fall into the headspace that an art career is a zero-sum game, that when another artist wins, you lose. It can be somebody you’ve never met with whom you have no connection, but when they’re making headlines and you’re not, it feels like you’re failing.

Worse, news of other people’s successes is front and center all the time. As a result, we now compare ourselves to everyone else on the planet.

So-and-so exceeded their Kickstarter funding by $50,000. And there’s the guy who makes his entire living from his Patreon subscribers. That woman over there makes six figures from YouTube videos, and that other person has thousands of followers on Instagram.

That artist made millions on NFTs. Somebody else just published their 4th book. His course went viral. She’s featured at Comic-Con. That big company sponsored this guy, and that girl scored a five-figure art grant.

Some kid’s painting video goes viral, and now he’s making movies with James Cameron? He’s 18. That girl’s not even out of art school and got a gig with Disney?

Suddenly I have to start dancing on TikTok to sell my art.

That’s the problem with attention. You’ve got to keep coming up with something new to get more of it and find a way to stand out in a crowd of millions doing the same damn thing.

When you’re not chasing the spotlight, you need to pay the bills.

I’ve been making my full-time living as an editorial cartoonist, illustrator and digital painter for nearly twenty years, plus several years part-time before that.

And yet, I wonder if I’ll still be able to do this for a living in six months.

I’ve had that worry every month since I quit my full-time job in 2005. It has never gone away. Good stuff has happened in my career, a lot of it. But when it does, that little voice always reminds me not to get comfortable. Because as soon as you stop and smell the roses, you get a thorn up your nose.

There are plenty of articles that try to talk you down from the comparison ledge. I know, I’ve read them. Hell, I’ve written some, though I felt like a fraud while doing it.

The worst part is the longing, that feeling that you could be so much more than you are, but you somehow missed that critical memo everybody else got because they seem to know what they’re doing, and you’re the idiot still looking for the light switch in a dark room. It’s that failure to live up to your own perfectionist personal potential, that dark cloud of not being good enough that will rob you of most of the joy of creating art.

Then there’s the shame that comes from not being more successful, feeling like a joke to your friends and family, as if they’re reluctantly indulging this phase you’re going through, just waiting for you to come to your senses and get a real job.

I can’t tell you how many acquaintances I’ve run into, people I hadn’t seen for years, who ask, “Oh, you still doing that art thing?”

All that’s missing is the pat on the head.

Now, this is the part where I’m supposed to tell you to let it all go, enjoy the ride, stop trying so hard and making yourself miserable. Comparison is the thief of joy. But then I’d be a hypocrite because I’m 51 years old, and I haven’t figured out how to accept any of that.

Not long ago, I watched that ‘Light and Magic’ series about the creative minds behind ILM. For a movie and art nerd like me, it was exciting stuff. The contrast between what they created in the ‘70s and what it has become today is remarkable. From little plastic spaceship models and whole camera systems they had to invent to bring Star Wars to life to later making dinosaurs real in Jurassic Park, it’s practically sorcery.

On the one hand, it was incredibly inspiring that they just made stuff up, and it worked. But, on the other, it triggered a sense of desperation that nothing I’ll ever create will ever be that good.

What I liked best about the story was how those people talked about each other 40 years later.  They were like family. It was the kind of workplace everybody wants but is ultimately very rare. They gambled on a dream and turned it into reality.

It’s easy to quote, “Be bold, and mighty forces will come to your aid.”

But chances are better than average that they won’t. For every ILM lightning-in-a-bottle story, there are a hundred others we’ll never hear about, featuring creative types who dreamed just as big and worked just as hard.

This artist’s life delivers more than its fair share of torment, uncertainty, and feeling unoriginal like it’s all been wasted time. I wonder if I’ll still be able to draw when I’m older or if age will rob me of my dexterity and eyesight. I worry I haven’t saved enough for retirement because I’ve invested more into this creative life of risk than my financial security.

And yet, for all the fear I feel every single day, and the shame for not knowing how to make all the right business moves, it’s still one of the very few places in my life where I’m allowed to touch something magical and unexplainable. In the work is a sense of connection to something greater than myself, even though I can’t define it. It’s a feeling outside the five senses, a well I’m allowed to draw from but not one I own.

It doesn’t come in the first moments I sit down to paint, nor does it show up even an hour into it. I’m still distracted by random thoughts, checking emails, and going to YouTube to answer a question that just popped into my head, leading to three more videos. And finally, an hour later, I must remind myself to get back to painting.

Once immersed in the work, a couple of hours into a session, something happens that reminds me why I’m spending so much of my limited time on the planet painting little hairs around a silly little grizzly bear’s ear.

It just feels right, that it’s where I’m supposed to be. It quiets the angry, critical, unkind voices in my head. It’s an escape, something good in a world I’m convinced is not. It’s a fleeting thing, only sticks around for a little while, but it comes and goes in waves.

Over the years, chasing those moments, that connection, those little hairs became a painting, then another, then a portfolio, and a body of work. Before I knew it, it was a career and life as an artist.

If you are lucky in a creative profession, you never stop learning and trying to become a better version of the artist you were yesterday, which is the only comparison that matters. I thought this painting was done, but then I realized that the bear’s muzzle wasn’t long enough. Most people wouldn’t care one way or the other, but once I’d seen it, I knew I’d forever look at the painting and wish I had changed it.

So I did some cutting and pasting, a little warping and nudging, and spent a couple more hours repainting that section. It was frustrating, but I’m more content with the finished result and glad I didn’t rush it. And though it’s done, it’s still not quite good enough. I can do better, and I’ll try again on the next one.

Because that is the hardest part of being a professional artist, making peace with the fact that you will never be good enough for your own expectations and will spend a lifetime reaching for that carrot on the stick, knowing you will never get it. Even if you did, it wouldn’t be what you thought it was.

Ask me in another twenty years. 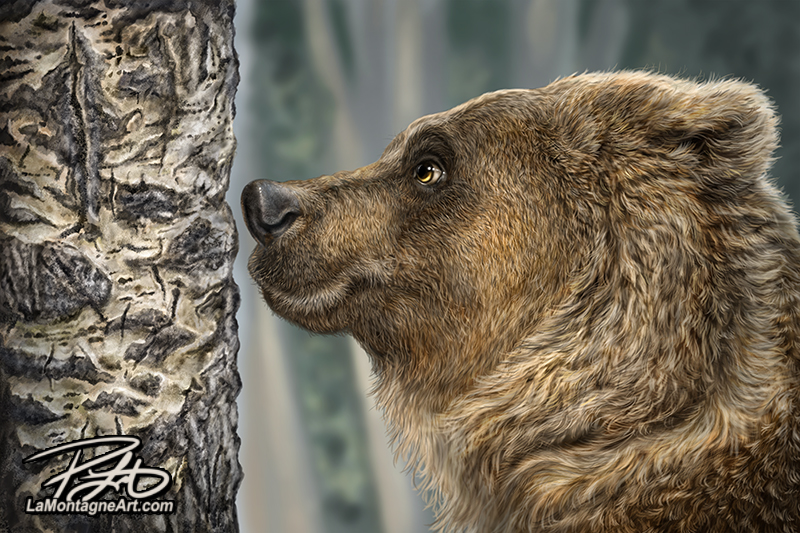