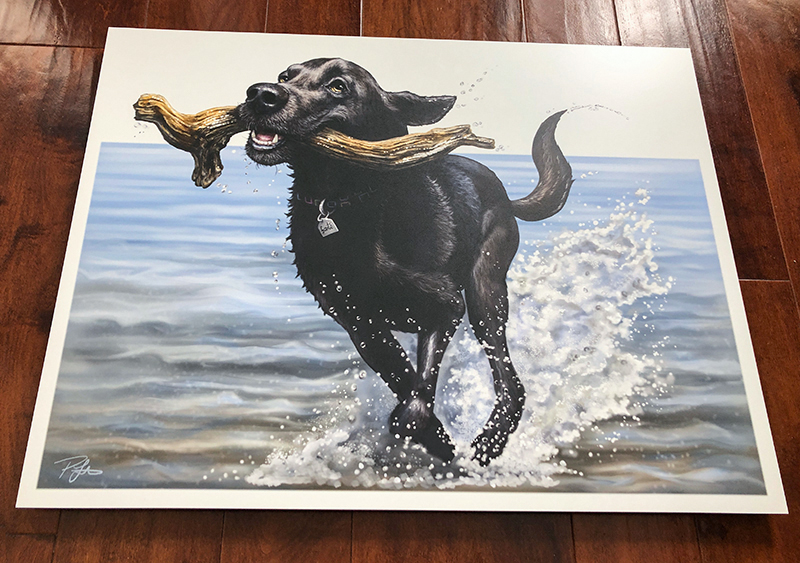 Last month, I finished what could easily be called my favourite commission piece to date. For those who’ve hired me for commissions in the past, don’t take that personally. I’ve enjoyed almost all the pet portraits I’ve painted. But this last one represented some notable artistic growth, which has become a rare thing.

When I first started drawing and painting, it was easy to take large leaps. Looking back on my earlier work, I can see considerable improvement over time as short as six months. Because I wasn’t very good at it, was hungry for new skills, and had no shortage of exceptional artists to learn from, I couldn’t help but get better if I kept putting in the hours.

Over time, however, my skills became more and more refined, as any creative should expect, and my work, especially in my style, reached a plateau. I had found the look that identifies my art, something most artists chase. People who know my work can easily spot it, even if they don’t see my name, just as I can spot the work of artists I follow.

I’m still always seeking to get better, but any improvement is often most noticeable to me. I get better at light and shadow, the way fur and hair flows, subtle shaping of features to reinforce the balance between whimsy and realism without straying too far into that phenomenon known as the uncanny valley.

People often say that my work looks “cartoony, but real.”

I’ve heard it said so often that I’ll occasionally use it myself when somebody tries to describe it but can’t find the right words.

I’m always trying to push the realism, mostly to challenge myself, without going so far that it becomes creepy and unappealing.

So, it isn’t just about painting better hair, fur, skin textures and personality in my funny-looking animals, but knowing when to stop. I suspect I’ll find that out the hard way one day and need to dial it back. I’m confident that Shonna will let me know.

This recent commission taught me I (thankfully) still have plenty of room for improvement. As I wrote about in that post, the client requested a full-body action pose because that’s how she wanted to remember her dog, Santé.

She didn’t insist on it, but it was her preference. And the last thing I want is for a client to be mostly happy with a finished painting but still think, “it’s good, but not what I really wanted.”

It was something I wanted to try but was afraid of because I didn’t think I was good enough to pull it off.

In every painting, there are peaks and valleys. The spark of the idea, taking and choosing reference photos, and imagining different options are always high points. But once the first brush strokes hit the digital canvas, so begins a slow decline. I find that the first half of a painting is simply putting in the hours, and there isn’t a lot of enjoyment there.

But somewhere in the middle, the fun starts when it starts to reveal what it might become. Sometimes it peaks again and then crashes when something doesn’t work, which can take hours to repair. The more time it takes to get through that valley, the more I think the whole piece sucks, I’ve lost it, and there’s no saving it.

But a brush stroke here, some light and shadow there, I solve the issue and again find the joy in it.

The best part of any painting is the last two hours. I have a playlist on Spotify reserved just for this period in a painting. It’s called ‘Pick Me Up,’ With that playing in the earbuds, drinking hot black coffee, often in the early morning hours, I’ll finish the piece and feel good about it.

That euphoria lasts a few hours, but I’m heading back down to the next valley by that evening, wondering what to paint next. Or I’ve shifted back into editorial cartoon mode and following the news, which can be like dark clouds ruining a sunny day.

Of course, there are other peaks for most paintings. The feedback I get from readers and subscribers is gratifying; those who follow my work and are kind enough to post a comment or send an email telling me how much they like the new piece. And if a new painting isn’t one they especially like, they’re usually kind enough to keep that to themselves.

I’m under no illusion that every painting is a winner.

Another peak is the first time I get a print because it never feels real or complete until I see it in real life. Most of the time, it’s when the first poster print proof arrives from Art Ink Print. Proofing with that company has become just a formality. I know how to prepare an image for their press, and they know what my work is supposed to look like, so I can’t remember the last time I had to reproof an image because the first one didn’t look right, but it’s been several years.

When the 18”x24” matte aluminum print of the latest commission arrived, it was a very good day. I checked it for flaws and couldn’t find any. However, I discovered that while the white background was smooth, the painted area was slightly raised with a noticeable texture. This was an unexpected but welcome happy accident that added even more to the print.

And there is the valley of apprehension of packaging and shipping the piece, waiting for it to arrive, or driving to deliver the work to the client. Finally, after more than two months of back and forth, sourcing the photos, discussing the approach, many hours of painting, sending periodic progress updates, her financial investment in the piece, it all comes down to the delivery and reveal.

Suzanne had already seen the image via email, but as I said, it’s not quite real until you see it in print.

Thankfully, she was pleased with it. We had earlier discussed some of her other artwork, and she generously showed me other pieces in her collection, including the first piece she bought of mine online from Wayfair. While I’ve had this license for some time, I’ve never actually seen one of the canvases in person, and I was pleased with the quality. 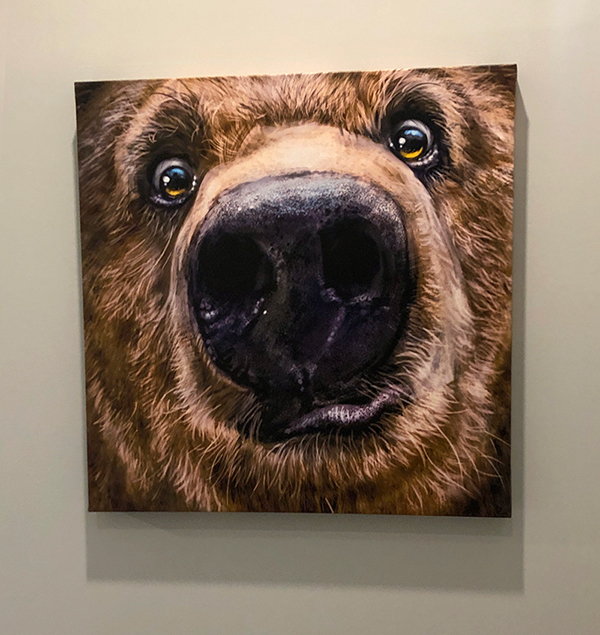 It’s always flattering to see my work in somebody’s home, especially a canvas of one of my personal favourites, my Berkley painting called “Peanuts.”

Even before I got home to Canmore, Suzanne had hung the print and sent me photos she generously allowed me to share.

As much as I love meeting clients in person, especially one who was such a pleasure to work with, and while delivering the painting is the pinnacle of all those peaks and valleys, there was an unexpected bonus to the day that can’t be minimized. 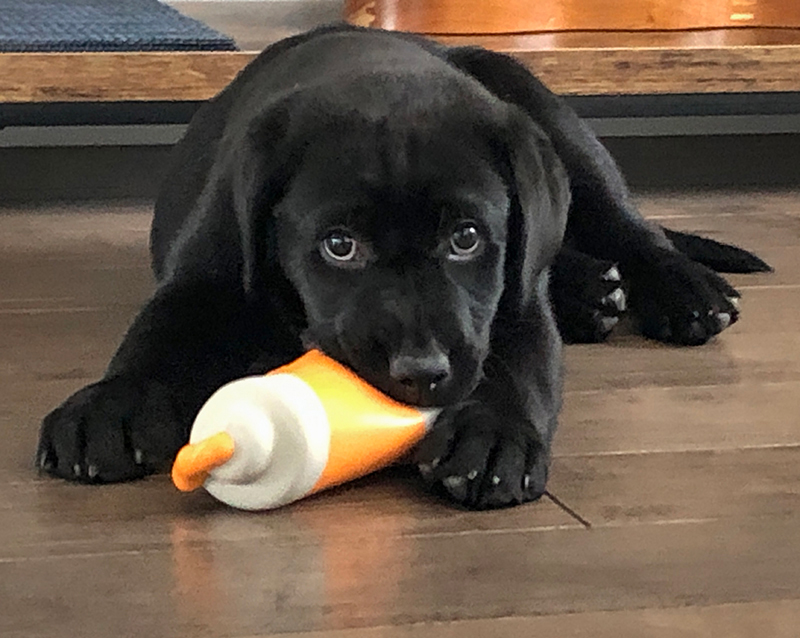 I got to meet Suzanne’s new little wonder, River, a black lab puppy, who is in that lovable, awkward, too small for her big paws stage.

From the dark valley of having to say goodbye to her best friend, Suzanne now gets the peak experience of providing a home to a new dog and introducing her to adventures around every corner. 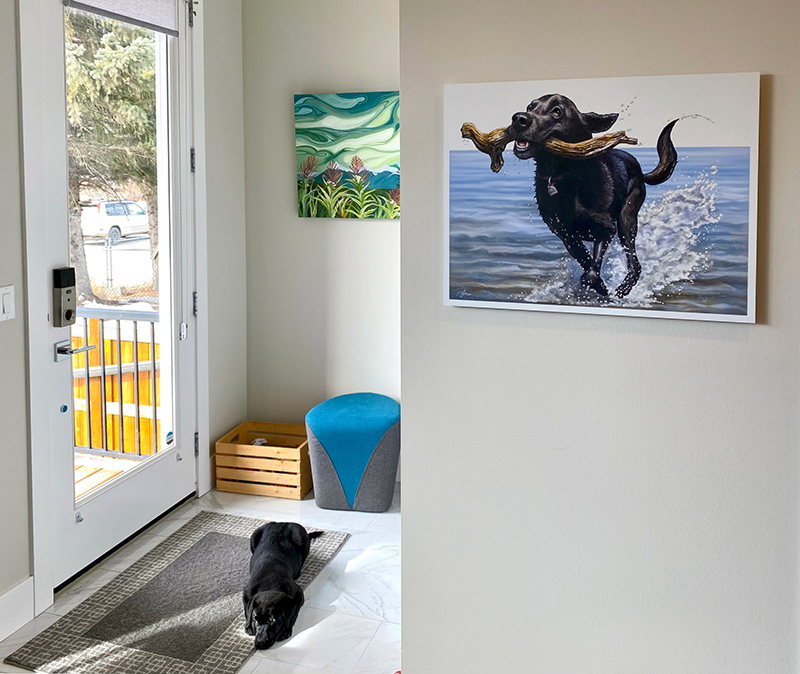 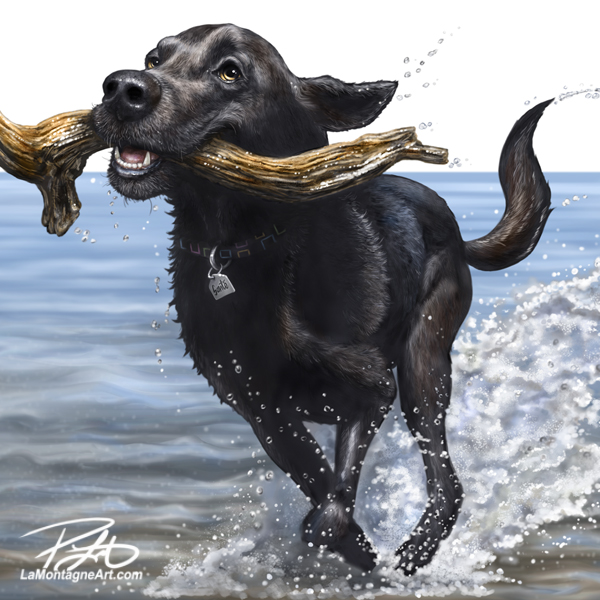 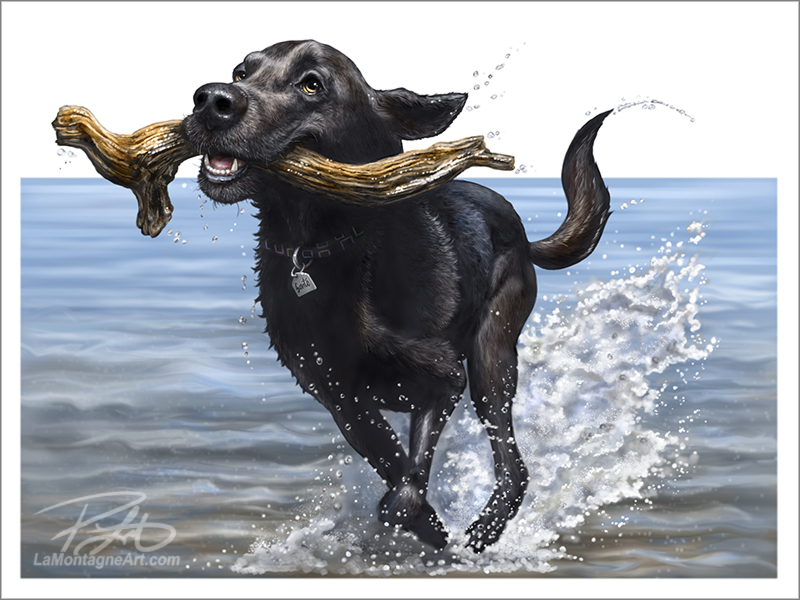 Late last year, one of my subscribers inquired about a commission of her dog, Santé. Sadly, Suzanne lost her much-loved pup to osteosarcoma at the end of November, and she wanted a painting to remember her.

The initial back and forth conversation is an essential part of every commission. It allows me to get to know both the person and the subject, and it helps me decide if I’m the right artist for the job, especially for a memorial piece.

While I can paint both in portrait style and my signature whimsical style, I’ll admit to preferring the latter, but most people who hire me for memorials choose the portrait style.

Suzanne, however, wanted to remember Santé at her best, and as she’s followed my work for some time, she requested the whimsical style.

Initially, Suzanne sent me a photo of Santé running through the water with a stick in her mouth and asked if I could paint her like that. I was reluctant for a couple of reasons.

My style is about the face and expression, best revealed by a large headshot painting, like much of my work. 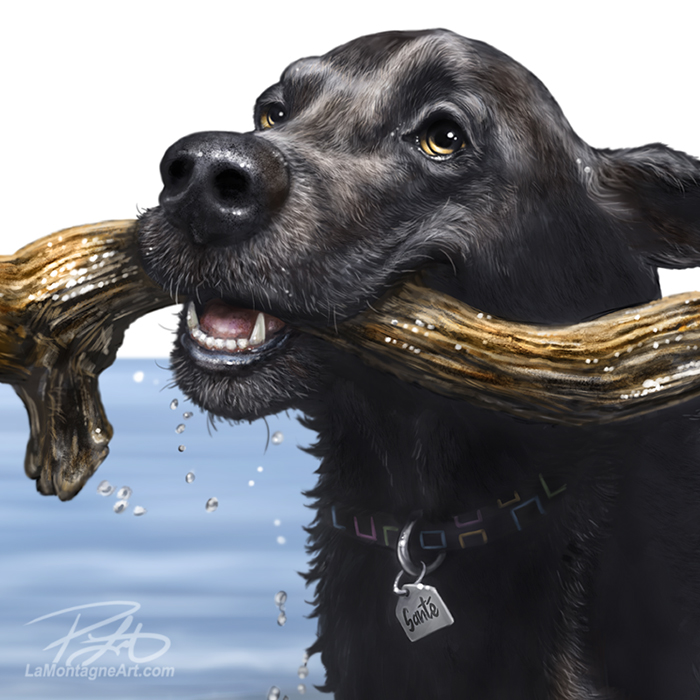 Also, I haven’t painted many full-body action poses, and to be honest, I wasn’t sure I could pull it off. Fear of failure is a powerful demotivator.

As part of her grieving process, Suzanne wrote a long essay about her life with her dog and shared that with me so I could get to know her as well. So I made a cup of tea one afternoon and sat down in the kitchen to read it.

I don’t mind admitting that it got me right in the heartstrings, and I had to wipe away tears. But, sad ending aside, it was a good story, and Suzanne is an excellent writer.

She is an outdoor enthusiast, frequently mountain biking and hiking, with Santé by her side. After reading about Santé’s adventurous nature, her boundless energy and obsessive love of sticks, I couldn’t imagine painting her any other way. That dog lived her best life.

Suzanne provided plenty of photos, but the first was the best, Santé running in the water with a stick in her mouth.

But I don’t just want to copy an image, especially in the whimsical style. I want to make it my own. So, I exaggerated her expression and gave her a big grin. You can’t see Santé’s teeth in the reference photo, so I found additional reference for that, as it helped a lot with the smile around that stick. I also exaggerated the size of the stick and changed its shape for a better overall composition. 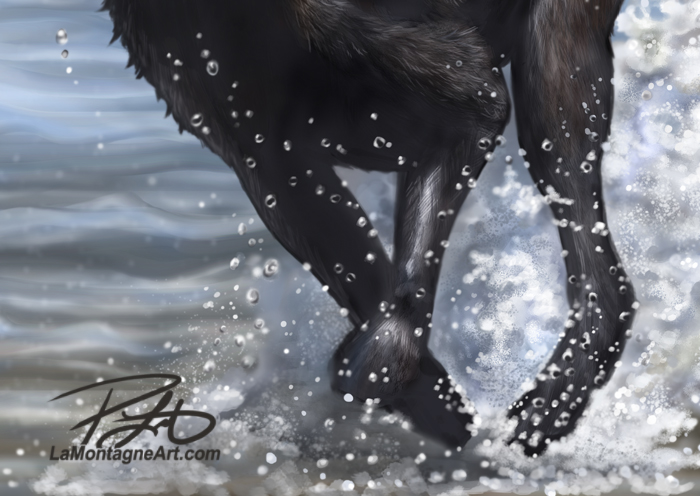 The water spray from her feet was one of the biggest challenges I’ve faced in any painting I’ve done to date. It took many hours to get it right, not to mention all the tiny droplets to add action to the scene.

Instead of filling the entire background, I created a graphic shape of the water and painted Santé so that she was running out of it, adding to the illusion of action.

This painting took a long time, but it was well worth the effort. Not only did it stretch my skills, but necessity forced me to learn a few new techniques to bring this to life. It was overcoming the challenge that made the final piece so satisfying.

I’m a frequent proponent of printing my work on canvas. It brings out the textures and richness in many paintings, especially the detail I paint in my work. But I gave Suzanne another option, and after providing her with more information, she’s chosen an 18″ X 24″ matte aluminum. Given the dynamic nature of this painting, I think it was the best choice, and I’m looking forward to seeing it once it arrives.

When I shared the final image with her Saturday morning, less than an hour after I finished it, Suzanne told me that it was the 11th anniversary of the day she brought Santé home at eight weeks old and shared a pic with me. That puppy didn’t yet know she had won the lottery and was about to have a grand adventure.

Of the painting, Suzanne wrote, “I love it. It’s perfect. You added the whimsy and didn’t lose an ounce of “her” in the process. Thank you so much for making the effort to know her to paint her.”

Please visit this page if you’d like to know more about my pet portrait commissions.