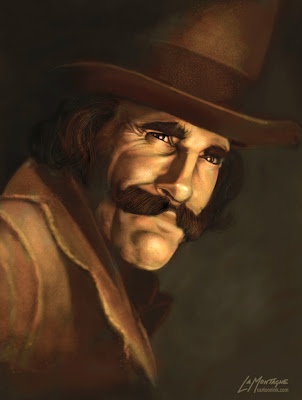 Here’s another painting drawn on the iPad for fun and practice. This is Bill ‘The Butcher’ Cutting from the movie ‘Gangs of New York.’ According to the DVD extras, Daniel Day-Lewis was so committed to the role, that he stayed in character while on set, even when the cameras were off. I’ve seen this movie a few times, and for me, the character of The Butcher is the best part of it.

Had a few requests for progress shots from the last iPad painting I did, but since I hadn’t saved any file copies, I kept that in mind while painting this one. Click on any of these images to see them a bit larger, although size is limited by the iPad resolution. 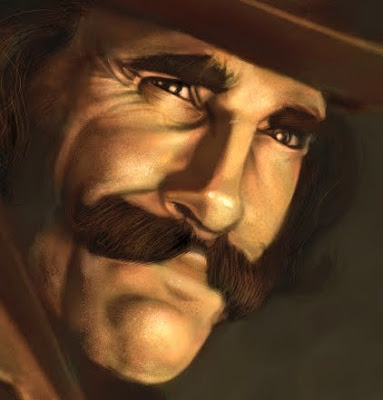 Now that I’ve done a couple of paintings and a number of cartoons with the iPad, I’m aware of a few limitations, aside from the resolution, that make it difficult to ever really do any finished work.

First, the brightness of the iPad. If I paint on full brightness, it’s a little hard on the eyes, so I paint with the brightness set to about half or 60%. When I send the images by email to my desktop computer, they’re a fair bit darker than they are on the iPad, so all of these images have had exposure adjustments in Photoshop.

My desktop and laptop computers are colour calibrated, so it’s a little unnerving to paint in colour on the iPad, because it doesn’t look the same when I bring it into Photoshop. This is why I painted in black and white first, in order to get the values right. After that, I added a colour layer in the ArtStudio app, then I flattened it and continued painting. As you can see, most of the work, however, was done in black and white.

While I’m pleased with the way this painting turned out, I might have chosen a difference reference photo to work from, as I think I could have found a better pose for the character. But since this is as far as I intend on taking this image, no harm, no foul. It was good practice.