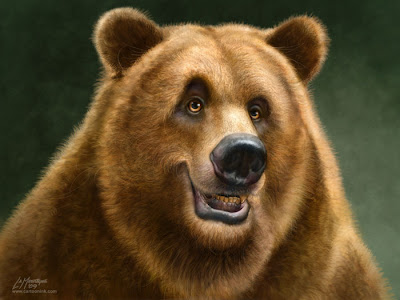 I’m fortunate to live in The Canadian Rockies, an area rich in wildlife, and home to some of the most majestic animals in the world. Bears, wolves, elk, and many more species are wandering the woods just down the street from my home.

I recently found myself inspired to do a series of wildlife paintings, but I wanted them to have personality and life to them. Something different, something fun. So this grizzly bear ‘portrait’ is the first in the series. 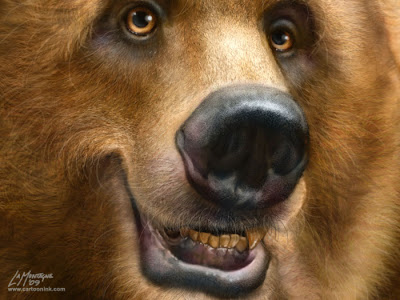 My close friends are well aware of the irrational fear of bears I’ve had for a number of years. I call it bear-anoia. Frankly, I’ve never understood it. I love bears, and always have, but found myself quite nervous about running into one while on a hike or out camping. There is a difference between being ‘bear aware’ as they say in these parts, and worrying that Yogi or Boo-boo is going to jump out from behind every bush doesn’t exactly enhance an excursion into the great outdoors.

I don’t like having phobias. I used to be claustrophobic, but I cured that by taking a couple of guided trips into the Rat’s Nest Cave in this area. Very tight spaces and no easy exit. Now, I can’t get enough of the place. So to deal with the bear thing last summer, I went the hypnosis route and it is now much less of a concern than it used to be. I think people should face their fears. It’s very liberating.

Following are some step-by-step screenshots. Click on the image to see it larger. It should be noted that I while I did sketch a few studies before painting this image, I didn’t scan the sketches and work directly from them. The painting was starting and finished completely in Photoshop.

I really think I’ll enjoy working on this series. 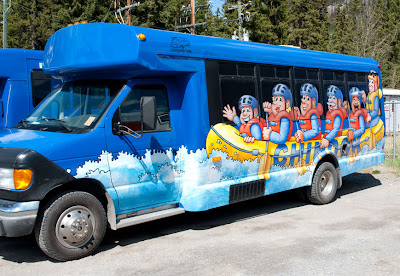 I’ve been wanting to share this job for awhile, but as in all contracts, secrecy is usually required until it’s finished. I’ve been done with the images for a little while now, but I got word this week that the bus was on the road, so I couldn’t wait to drive to Banff to take some photos. Click on any of these images to see them larger.

Chinook Rafting presented me with a big challenge: Paint a cartoon of a whitewater raft full of people to be wrapped on both sides of a bus. Since there is text that couldn’t be simply reversed, that meant two paintings, even though most of the other side is identical, but flipped. The design and painting wasn’t so much the problem. Sketches, changes, more sketches, cleanup…the usual. It was the layout and the size of the final image that presented the challenge. After all, there’s a door, and windows, and wheel wells. 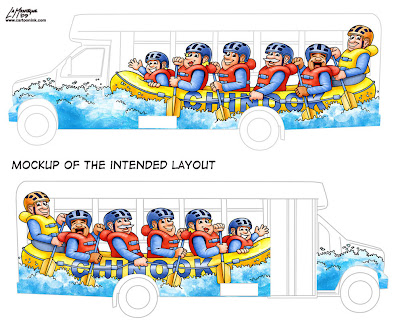 The main file I delivered to the company that did the actual output and printing of the vinyl was 1.59GB. Yep, that’s GIG. A vector design would have been a whole lot easier, but the painted look can’t be done that way, hence the huge file size. And this is why I keep my computer hardware updated. 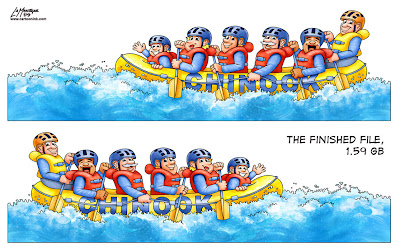 I worked for a sign company here in Canmore for a couple of years, so I knew what was involved with doing a vinyl application for something like this and what layout challenges might come up. While there were some problems (aren’t there always?), they were manageable and I’m extremely pleased with how this looks on the bus. Can’t wait to be driving down the highway and see this vehicle taking visitors to the area out to go rafting. 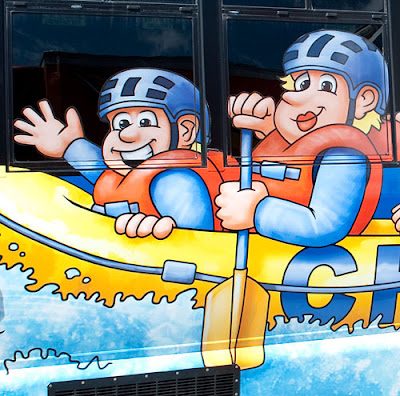 The company logo and contact details will be put on the front and back of the bus very soon but I’m not involved with that, as it’s a pretty straightforward layout and application.

I love my job, so most days are good in my world. Today, however, was VERY good. 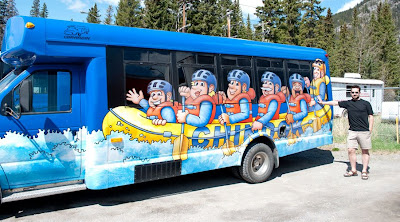