Caricature of Jason Seiler. This was an assignment for this week in his course that I’m taking. He gave us three people to choose from, but I liked his expression the best, so I went with this one. This was an exercise in values…getting the proper tones and contrasts between black and white. Really loving the course and learning a lot. 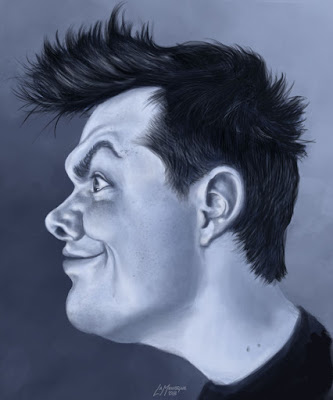 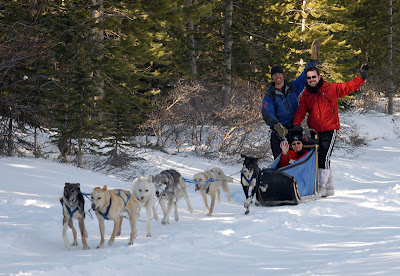 One of the best parts of my job is that I get to work at home and make my own schedule. While I do get up at 5:00 AM everyday, it’s because I like early mornings. I also like to go for a swim at 11:30 most days, bike in the afternoons in the summer, and sketch in front of the TV in the evenings. I still work more hours than I ever have at any other job, but it doesn’t feel that way.

While I live in one of the most beautiful places in the world, it’s easy to take it for granted. So every once in awhile, my wife and I play ‘tourist in our own town.’ It helps us appreciate our surroundings and how fortunate we are to live here.

What does this have to do with being an artist? It recharges the creative batteries. If you never get out of your office or studio, just to decompress and sample what life has to offer, your creativity will dry up. I never feel as excited about my work as when I’ve just returned from a camping trip, a vacation, or even an afternoon doing something fun.

Yesterday, my wife Shonna and I went dogsledding with a local tour company. Only fifteen minutes from our house. As you can see, the weather was perfect, the dogs were a lot of fun and very friendly, and I woke up this morning feeling more creative than I did yesterday.

Want to gain some real perspective? Read “No Opportunity Wasted.” by Phil Keoghan. Changed my life.

Here are a few pics. 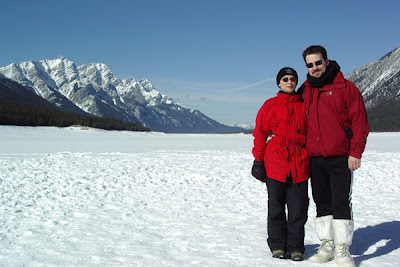 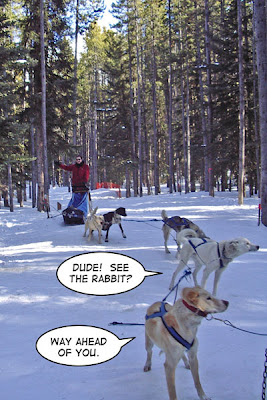 No, I’m not strangling the dog…he’s trying to lick my face! 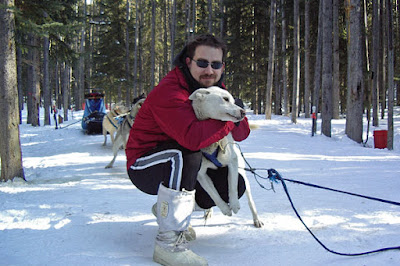 The leader of the Liberal Party, the Official Opposition of Canada. The buzz in all the newspapers is asking, ‘when will he pull the trigger,’ on a federal election. Dion seems reluctant to do so, and the pundits are speculating as to the reason why. I have my own opinion on this, but then again, so does everyone else.

This is the cartoon based on the sketch in the previous entry. I’ll often sketch out the pieces separately. The hand with the gun was one sketch, the suit wasn’t even sketched, just painted straight into Photoshop. I then piece it all together and paint over it on a separate layer, eventually deleting the initial sketches.

Have a great weekend!
Patrick 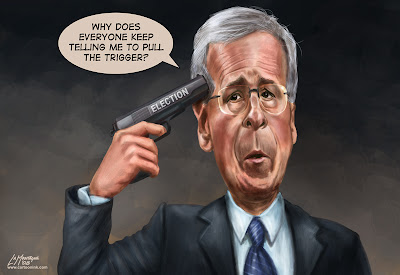 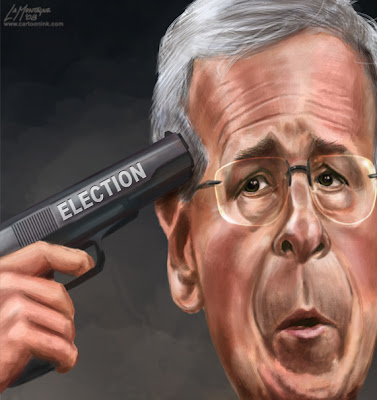 There is one annoying part about finishing a caricature, illustration, cartoon, or anything else creative, for that matter. I usually dislike it about 5 minutes after it’s done. When I first started out doing this, the time between ‘finished’ and ‘can’t look at it,’ used to be longer. Lately, however, it happens a lot quicker. Looking at any of my past work only makes me want to redo it.

I asked Seiler about this in my most recent caricature course critique and he commented that he felt the same way. His take is that it’s a good sign, because it means we’re constantly growing as artists. If we were still happy with everything we’d done before our current work, it would mean we hadn’t grown at all since that time and we’d become stagnant. As we learn new techniques and develop a more discerning eye, our ‘ghosts of artwork past’ no longer measure up.

While it’s comforting to know that I’m not the only one, it does feel as if we’re all just trudging mules chasing that elusive carrot hanging in front of our eyes…except that we’ll never catch it. This does further reinforce the old adage, “it’s not the destination, but the journey.”

So what did I learn this week? Enjoy what you do for it’s own sake, because in the end, each little success is nothing more than a step toward the next one.

Here’s a sketch of Opposition Leader Stephane Dion for an upcoming caricature.

Last year, I created a weekly animated editorial cartoon called Beaver Fever. A political and current events smart-ass kind of show, along the lines of The Daily Show, Stephen Colbert, Rick Mercer, 22 Minutes format. Don’t get me wrong, I don’t think it was on par with those shows, just the same format. I get emails asking what happened to it and why I don’t create any new episodes.

During the 2006 federal election, I did some animation for the CBC. A weekly animated editorial cartoon that taught me a lot of hard lessons on the hurdles associated with working for a publicly funded organization when it comes to political opinion. I didn’t enjoy it, but I learned a lot about Flash animation and about dealing with the CBC.

Believe it or not, those first animations are still online. Click on THIS LINK and scroll down to Flash Cartoons. One of those is the first appearance of Beaver Fever, even though the beaver looks like some evil overfed Orson Welles type personality. My favorite is Harperstein, because it generated the nastiest emails I have ever received. I ticked off a LOT of right wing pro-Conservatives with that one and ended up on the phone with a few different folks at the CBC for far longer than I wanted to be.

I spent a fair bit of time and money that year learning Flash. I bought a number of books, which I found didn’t really work for me. Then I discovered Cartoonsmart, the brilliant website by Justin Dike. If you’re a cartoonist who wants to learn Flash animation, save yourself a ton of frustration. Buy his tutorials.

A year later, I decided to see if I could syndicate my own animation, and that’s where Beaver Fever came in.

What I learned is that a lot of people were interested in it. I received a lot of positive comments and traffic. I even had some promising interest from some newspaper websites and one newspaper chain. What it came down to was that nobody wanted to pay for it….well, actually one paper in Ontario did pay for it. They were very supportive of it, actually. But syndication is only successful with many clients, and one client just wasn’t justifying the 20 plus hours of work the episodes took each week. From scripting (and revision), graphics and character creation, animation, voice work (all done by me), audio editing, music editing, and other production efforts, I was exhausted each week, especially since I still had to create my regular print cartoons and other work for clients. I can go without sleep on a tight deadline, but not for five months straight.

BUT…I’m not complaining, just explaining. For awhile there, I really enjoyed developing the character of Tim Castor, playing with voices, and learning Flash in the process. At times, it was a lot of fun. And while it didn’t pay off, I think it was a risk worth taking. The experience is not something I regret, not even for a moment.

I learned that I was capable of animating in Flash and delivering a weekly animation, but also that I didn’t enjoy it nearly as much as I do drawing and painting. And finally, I learned that Canadian newspapers and online news media aren’t yet ready for an animated editorial cartoon, at least not one they have to pay for. Or maybe they just didn’t want mine.

Either way, it was an experiment and I’ve moved on. But the Big Plans website (the home of Beaver Fever) is still online. For one, I think bigplans.ca is a great domain name and I’m hanging on to it. It’ll be my ‘let’s see if THIS works’ site. It’s also a good online portfolio of my Flash skills, because I am still called upon to create Flash components for a client’s website from time to time.

I can guarantee that the future will hold more experiments, whether they are with Flash or something else. So if you haven’t seen Beaver Fever and would like to take a look, all of the past episodes are still there. 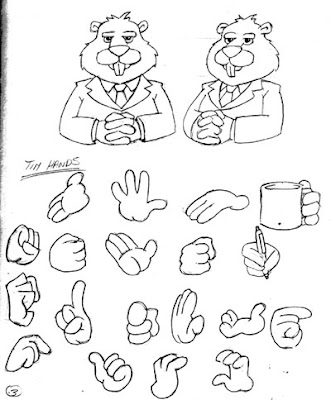 The Flash character sheet. Notice his hands were originally grey, trying to make them look like how they would be on a real beaver, matching the nose colour. Unfortunately, his hands got lost in his suit and a couple of people thought he was wearing gloves. Changed his hands to brown in the second episode and went back and fixed the first one. The character sheet doesn’t show the different arms, ties, and muzzles I created as well. 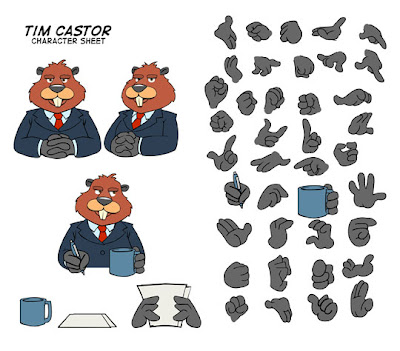 And that’s why I started a blog.

I’ll be posting stuff that I’m working on, some mediums and techniques that I’m exploring , likely some links to tutorials or resources I’ve found, and anything else I think might be of interest to other artists out there, pros or amateurs.

What you won’t find here…long political opinions on the state of democracy in Canada, the US, the world, blah blah blah. There are more than enough political pundits out there, and most of them know a lot more about politics than I do. Whatever I have to say about politics is usually done in my editorial cartoons. I may explain the spark behind a cartoon from time to time, but I generally dislike arguing politics, as I really have no allegiance to any party or individual. If I could sum up the root of my political opinions…I think we’re getting screwed, and it doesn’t matter who’s in power.

See? No new insight there.

Time for some sharing…
I can’t get enough of learning new things. If I didn’t have to sleep, I’d spend that time watching training DVD’s from the Gnomon Workshop, taking Schoolism courses, getting bleary eyed over the tutorials, videos, and forum contributions on the National Association of Photoshop Professionals website, and trying to keep up with too many trade magazines that I like to read.

But there’s supposed to be some artwork in here, isn’t there?

So away we go. I’m currently taking a great online course taught by Jason Seiler. If you haven’t seen this guy’s work, you are missing out. An incredible inspiration and an amazing caricaturist. I’ve also found out that he’s really good at teaching his craft as well. I’m in Week 3 of this course, lots of stuff to absorb, and a heavy workload, but well worth it so far.

Assignments so far have been heavy on what Jason calls ‘citizen sketches.’ These are average folk with interesting faces. He supplies the reference photos. But there have been a couple of celebrities to caricature as well. Since I’m always trying to grow into a better artist, I’ve tried adjusting my usual style with these. These are pencil sketches, with some Photoshop painting after the fact. The likenesses…they could use a little more work, but since these are what I submitted, I decided to show them as is, warts and all. 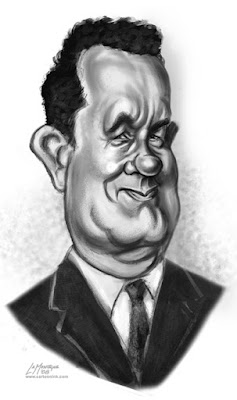 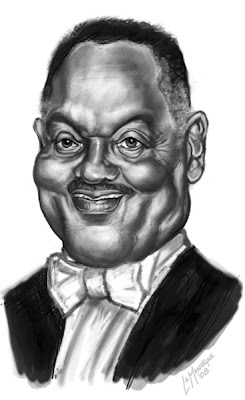 and since I’ve got to do caricatures for editorial cartoons from time to time, here’s one of Prime Minister Stephen Harper that I did this week. 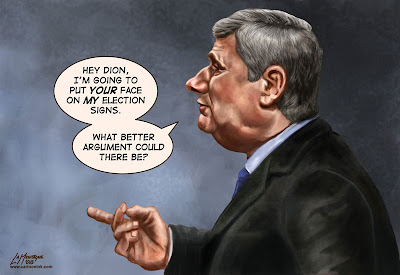 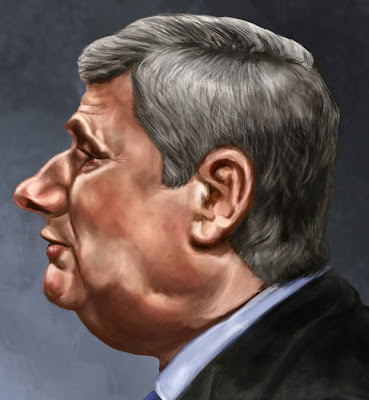 Thanks for stopping by and feel free to come on back now, y’hear? Don’t worry, not every entry will be this long.

In the coming weeks, I’ll be populating a links list on the right-hand side. I’ll be listing links to those people and places who’ve inspired me and from whom I still have a lot to learn. Perhaps one of you will learn something from them as well.