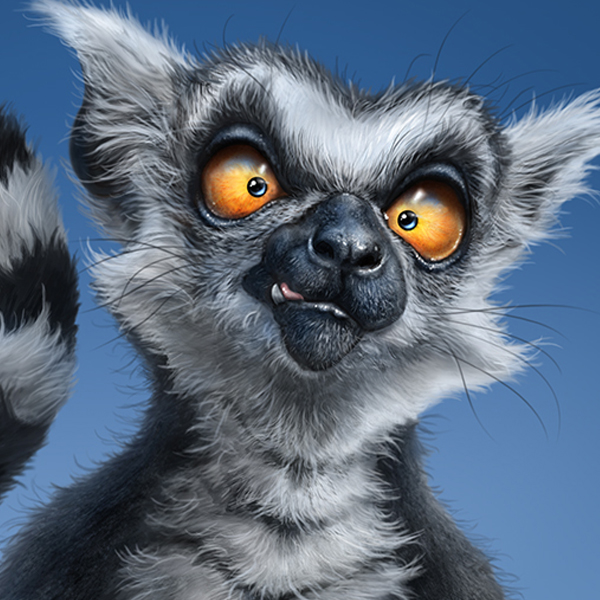 Rounders, Molly’s Game, 21. I’ve always loved movies about card games and gambling, even though the limit of my experience has been playing low stakes Blackjack at the Photoshop World conference. The most I’ve ever lost is $300 over five days, which is nothing for Vegas. I had budgeted to lose that money from the start, since I’ve got no delusions about my skills.

With about a half dozen obvious tells, likely more, I’ve often said that I would be the worst poker player, so I’ve never bothered. I’m a bad actor; I wear my heart on my sleeve.

So this week, I’m not even going to pretend to have it all together. I haven’t got the bandwidth, and I’m confident most of you can relate. The pandemic has been going on for longer than any of us expected, and regardless of where you stand on the whole thing, I’m sure you’re as tired as I am.

My motivation is deep in the red, I’m easily distracted, I don’t want to talk to people, and I’ve got a short fuse. If one more person tells me to hold on just a little while longer, especially a politician, well, I’m just gonna…

…well, I’m just gonna hold on a little while longer.

Because what else is there?

In keeping with my current short attention span, and complete lack of inspiration to write anything motivational or upbeat, here are simply some updates.

Despite that they moved it from the usual April date to the August long weekend this year, Expo has once again been cancelled.

I know they made the right call, but it’s still one more gut punch in a long series of them.

It wouldn’t have been a good year even if they had gone ahead. With the U.S. border likely to remain closed, or perhaps just opening by then, the big celebrity guests they need to draw people in won’t be showing up. 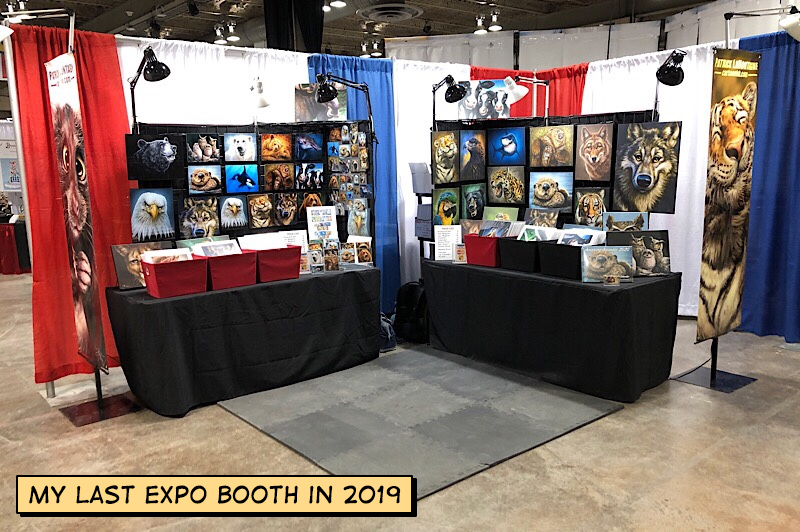 Expo boasts close to 100,000 people over four days on a good year, moving between multiple convention halls. A few years ago, it was the sixth biggest Comic-Con in North America. But it is mainly an indoor event, and I don’t think people are ready for that yet.

Shonna and I are three weeks past our first vaccine shots and likely will have our second by then, but like many others, I’m pretty shell-shocked by this whole experience. After running my booth all day, I’d probably spend the first hour back at my hotel room having a Silkwood shower.

It would be a significant investment of time and funds in a year when both are in short supply. I wouldn’t expect to recoup my costs, let alone make a profit. Now, that’s not always the goal because I enjoy seeing many of you each year. While I’ve talked to quite a few of my favourite Expo people over email during this lock-down, it’s hardly a substitute for seeing them in person.

And I also love introducing new people to my funny-looking animals. So I will miss not being there again this year.

Fingers crossed for next year.

I’ve been taking a marketing course over the past couple of months, which has been pretty damn impressive. I’ll be happy to tell you about it soon, but it has been hands-down one of the best investments of my time in a lot of years. It granted me a new perspective on promoting my work and a new appreciation for those of you who’ve come along for the ride.

Continuing education is always a good investment, and when you’re self-employed, it’s an absolute necessity. Technology changes so fast that it’s hard to keep up, but it’s worth the effort.

I gave a video presentation to a Grade 7 class here in Canmore this week. They’re doing a module on editorial cartooning, and I was asked to talk to them about that side of my work. I’ve done several of these in person at local schools over the years, but this was a new experience. While many people are having regular meetings over Zoom and Google Meet, I haven’t. I enjoyed becoming familiar with the technology, and it went smoothly.

After my twenty-minute presentation, sharing some cartoons and talking about the work, there was one question about drawing and digital art. I explained to the students that they were fortunate to live in one of the greatest times in history for learning to do anything they want. It’s all out there on the internet waiting to be discovered.

But they have to be willing to put in the work, always the most essential ingredient. There are no cheats or shortcuts around it.

But I’m also working on a new painting of a Bighorn Sheep, something I hadn’t planned. It began from a frantic rough sketch when I just needed to put something (anything!) onto a blank page to keep the demons at bay. This Bighorn has attitude and a little sarcasm, might have a screw or two loose, but sometimes those are the most fun. My Ring-tailed Lemur comes to mind. He’s not all there, is he? 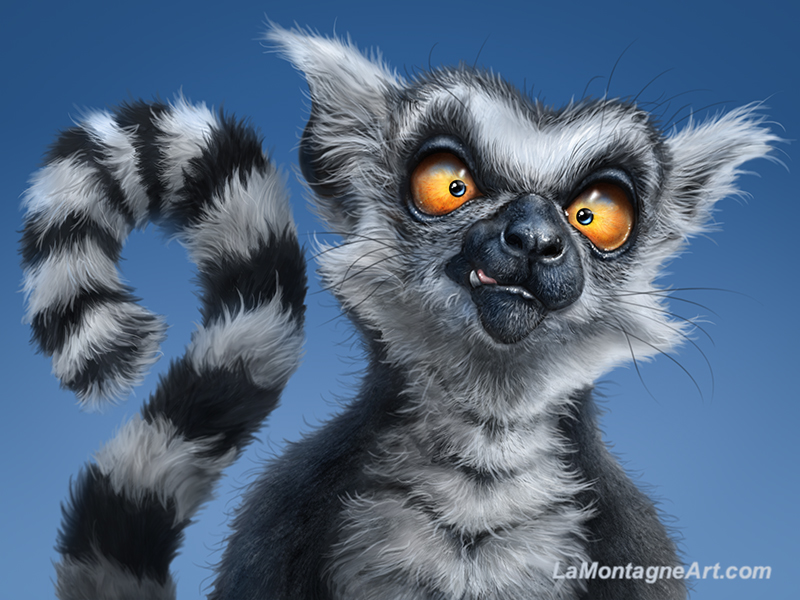 I’ve also started a character portrait from a streaming series and have gathered references for another character portrait from a movie. Many of you already know that when I’m feeling lost and overwhelmed, I’ll paint portraits of people to try and reset things. Those don’t contribute to my bottom line, but they usually do help my mental health. Usually, I paint one of these in late fall or winter, but there is nothing usual about this time in which we’re living.

Here’s one I did in November 2019 of Quint from the movie Jaws. 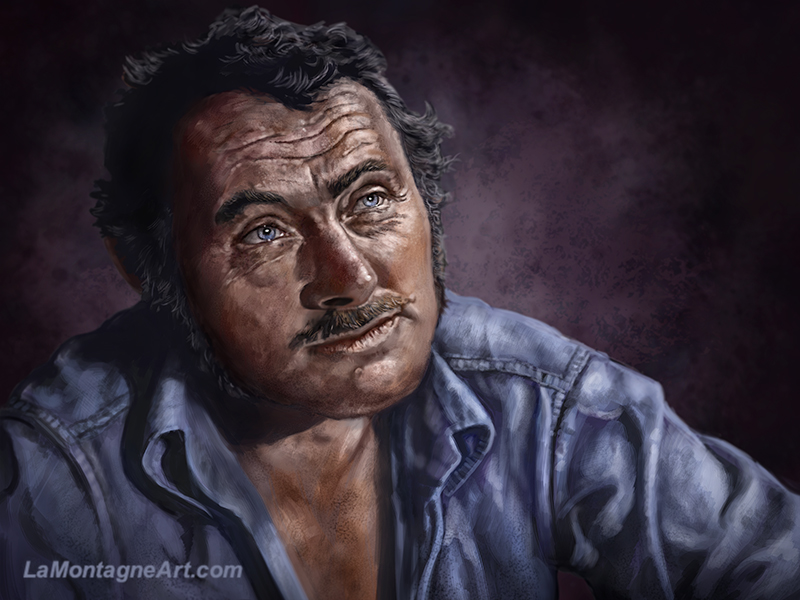 I’m trying something new, writing the story behind one of my favourite paintings. It’ll be a small e-book, a free downloadable pdf for followers of A Wilder View. It’ll feel like a chapter of the art book I’ve always wanted to write. I figure if it works out, and I write a few more, I’ll have enough of them to actually populate a book and won’t have any more excuses for not publishing one.

Sometimes I have to trick myself.

I’m planning to design a new website, but in the meantime, I’m making improvements to the existing one.

I’ve added some new payment options to the online store to make it easier for you to add one of my whimsical wildlife prints to that bare section of wall you’ve got. You really should put some artwork there, y’know, maybe a Smiling Tiger or a family of Owls. I’ll let you choose.

In addition to the existing credit card payments and Paypal, I’ve added Stripe and Apple Pay as additional payment options. That’s right; if you’re an Apple user, you can buy with a thumbprint.

And if you live in Canmore, I’m always happy to take payment by e-transfer, and I’ll deliver free of charge. Just send me an email for those orders instead of going through the store.

Wrap it up, LaMontagne!

Live video presentations, streaming TV, buying stuff from our phones, we’re living in a sci-fi movie. We should be saying “Wow” a whole lot more often, instead of complaining when the Wi-fi gets slow. A lesson we’ve all learned this year is how much we’ve been taking for granted.

I got nothing else. 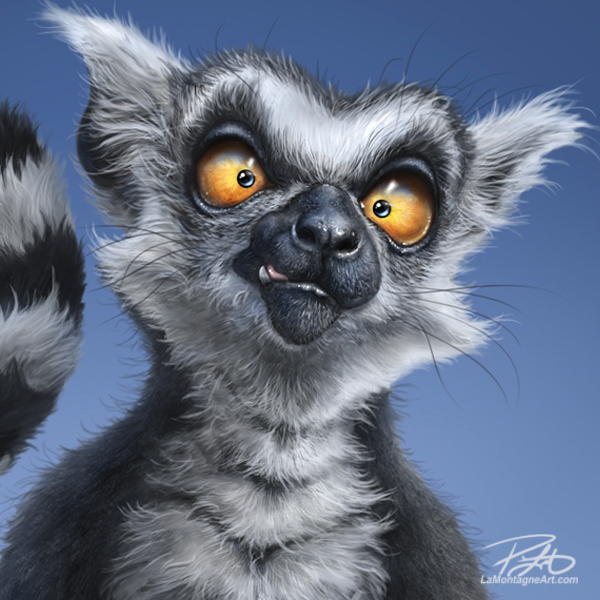 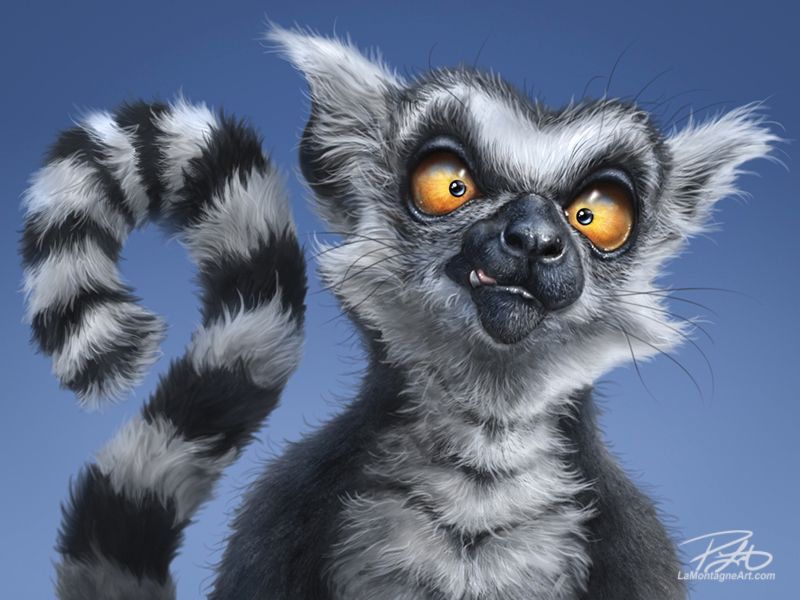 Wacom sent me their new Wacom One display to take for a test drive and to record a video for them. The video has an inspirational theme, rather than a technical one. I’ve written the script, recorded the video, but now I need a few days to edit all of the footage and record the audio, especially since I have my cartoon deadlines as well. It’s a lot of work to take a painting that took about 15 hours and compress it into a 3 or 4 minute video so people won’t get bored.

Seriously, I love painting hair and fur, but it would be effective torture to make me watch many hours of somebody else doing it.

Initially supposed to be more of a cartoony creation, I wanted to see what kind of advances Wacom had made in their display technology, so I painted with it instead. The Wacom One is being marketed as an entry-level display, but I enjoyed working with it and didn’t feel hobbled at all.

I’ll have a more technical evaluation post a little later, but for those of you who just like looking at my funny looking animal paintings, I’ll save those details.

The Ring-tailed Lemurs at the Calgary Zoo are fun to watch, and the Land of Lemurs is an immersive experience. Their enclosure allows them to freely roam where they like and it’s the people who are restricted in the center, but with no barrier. With zoo staff on hand to make sure people follow the rules, the open-air concept allows for some great photo opportunities.

I’ve taken many shots of these critters and plan to paint a group of them together as they like to huddle in a ball. All of the expressive faces peeking out is quite comical. 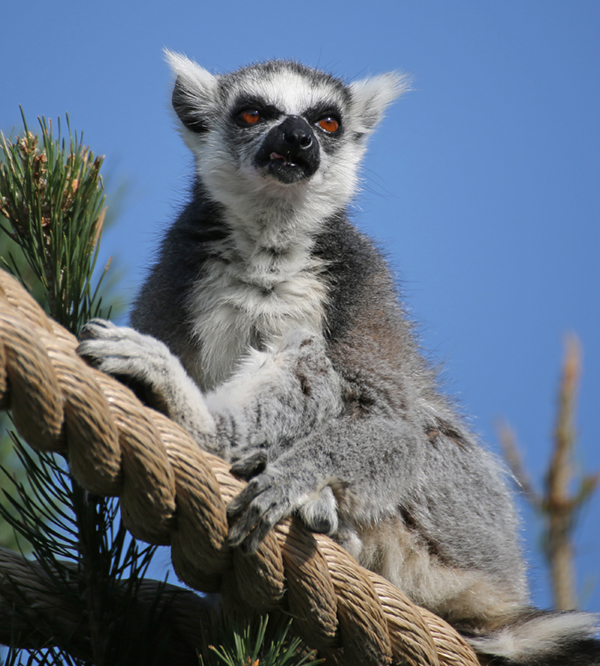 While going through my photo reference, however, I came across the image above. She’s a female, as are all of the ring-tailed lemurs at the zoo (or were at the time of this photo), and I liked what I saw. I even loved the blue sky background, and saw no need to change it. I don’t know if she really has a bad attitude, but part of the reason I paint the personalities I do is that I actually see that in the photo reference I take. The painting definitely looks male, however.

This was a lot of fun. I know I say that about many of my paintings, but I’d put this painting experience in the Top 3. Many of my paintings could be labelled cute, but this one borders on psychotic, which is probably why I liked it so much. Those crazy eyes suggest a critter that isn’t quite all there.

As my friend Pam at Wacom said this morning on Instagram, “He looks like an evil ringleader.”

So while I don’t know if it’s the kind of image that will be popular on a print or licensed product, some of my best images were ones I did for myself. I never expected my cantankerous Ostrich image to be popular and that one has developed a strange cult following I don’t fully understand.

I worked a very long day on Sunday drawing three editorial cartoons so that I could spend all day yesterday putting the final hours in on this piece. I could have finished it last night, but I erred on the side of patience and decided to sleep on it. When I opened the image this morning, I laughed out loud. It’s such a ridiculous expression. 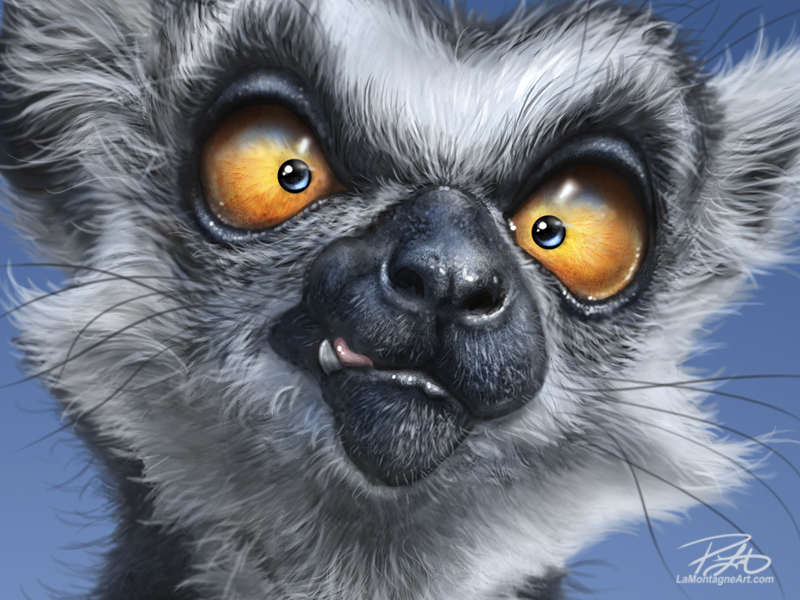 Another hour on the fine hairs, tweaks here and there, tunes cranked in the earbuds, and I’m glad I waited. It was a great way to start my day.