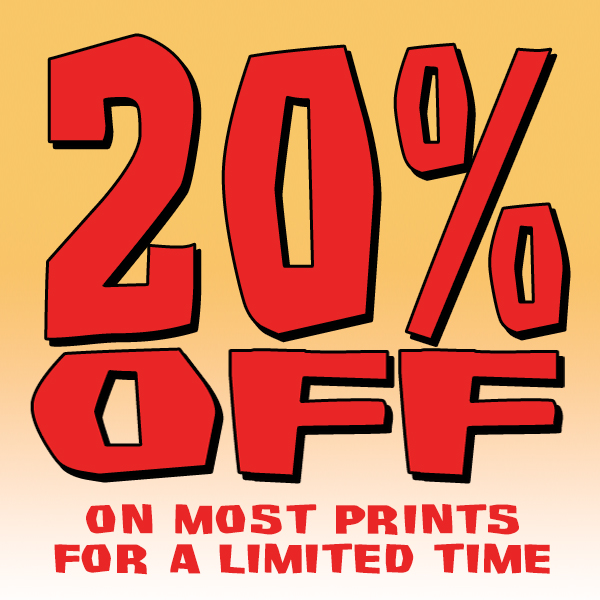 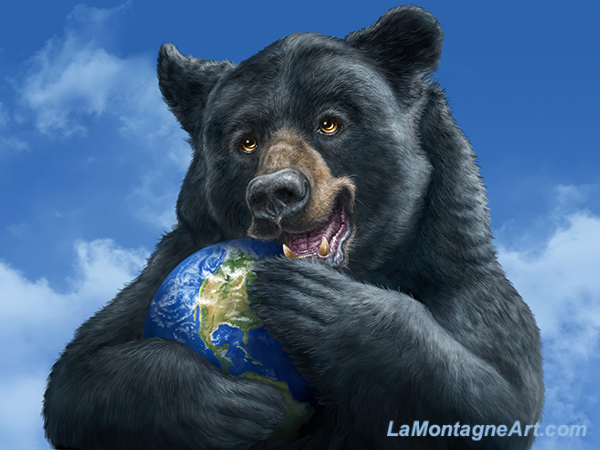 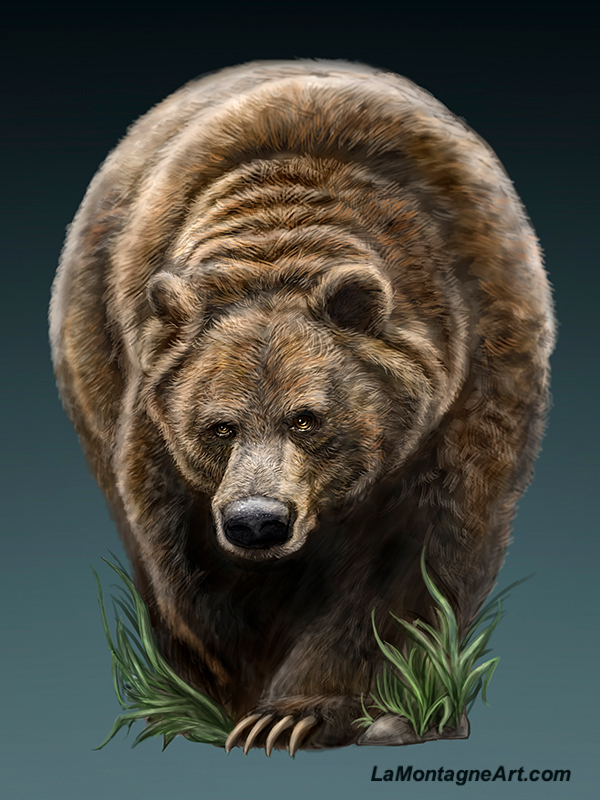 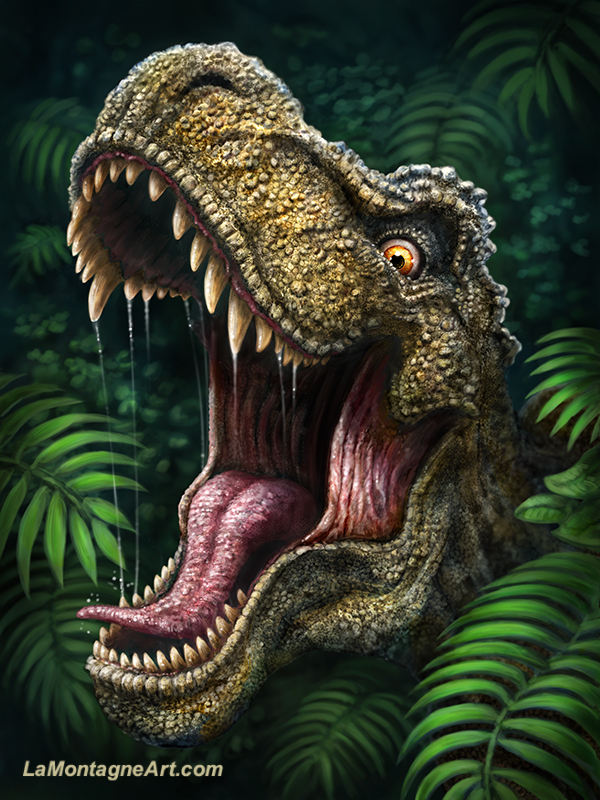 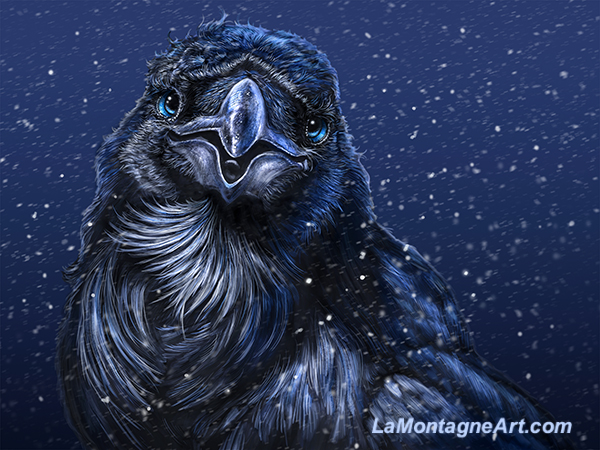 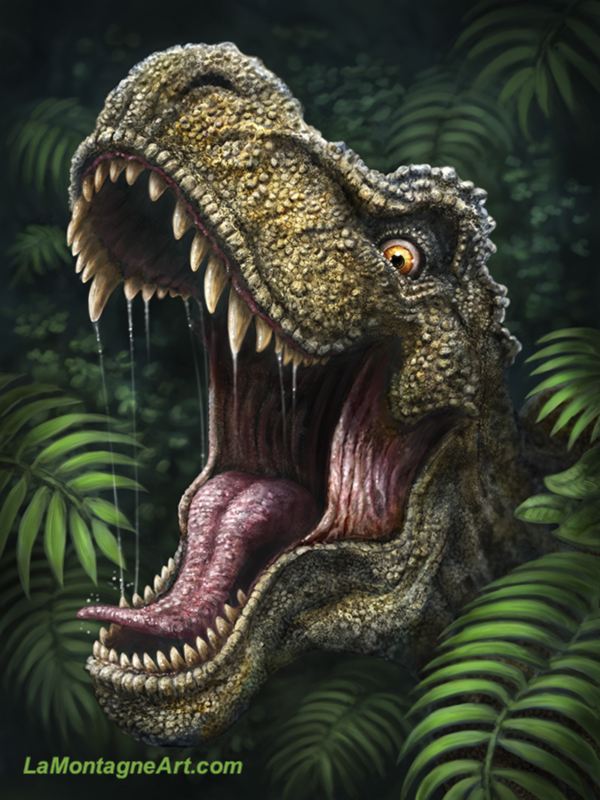 One of the things I’ve learned about licensing is that I need to be open to suggestions, especially from my licensing partners. Mike from Pacific Music & Art has more than once asked that I paint a dinosaur, but I didn’t want to.

The first time I considered it, earlier this year, my biggest concern was that the only available reference  is scientific illustration based on the fossil record for an extinct animal. That means I would need to reference the work of other artists. Having been a victim of it myself, I’m hyper-sensitive to artistic theft. To use another artist’s work feels wrong.

Since the obvious subject choice was the Tyrannosaurus Rex, I thought perhaps if I got the reference from Spielberg’s Jurassic Park, I could ease my conscience a little, even though the animatronic dinosaurs are still the collective work of artists. I’ve used scene references for all of my portraits of movie characters.

I watched Jurassic Park, realized that all the closeup shots were in darkness and while raining. Since I didn’t want to paint my dinosaur like that, that was the first problem. Recent discoveries have shown that the T-Rex likely had feathers, some theorizing they had brighter colouring rather than that of a giant lizard. I couldn’t decide whether to paint the classic T-Rex we all know and love or go with a more up-to-date scientific version.

I gave up on the whole idea because it pushed all of my ‘this isn’t right for me’ buttons.

I started to think about it again in recent months and went on a deeper dive for reference.

While talking to a friend recently, I mentioned I was painting a T-Rex. I joked that taking the photo reference involved a DeLorean and a lot of running.

I watched all of the Jurassic Park movies on Netflix, found a couple with some potential reference scenes, and bought two of the films so that I could get some screen capture shots.

The best reference was still in darker scenes, again with rain, but I managed to find some useful scenes. That still didn’t get me everything I needed, so I went scouring the internet to see what others had done. I found 3d models, photos of dinosaur sculptures from zoos and parks, and scientific illustrations.

And I made peace with the idea that I’d be painting the traditional lizard looking T-Rex.

While preparing for this painting, I found an interview where Steven Spielberg revealed that he knew that some of his dinosaurs, including the T-Rex, weren’t accurate. He said that he was making an adventure movie, not a documentary and wanted to go with scary.

That convinced me to go with what felt right for my art style, and if some took exception to the scientific inaccuracies, then clearly it’s not for them.

I once had somebody angrily comment about my painting that “a fox’s eyes don’t look like that!” I invited him to look at my other art. None of my animals look precisely like the real thing.

Cartoonist Gary Larson, of The Far Side fame, once had a reader take issue that one of his cartoons had a penguin and a polar bear in it. He had pointed out to Larson that penguins and polar bears do not live in the same climate. Larson responded, “But it’s OK that they’re talking, right?”

Because I used so many different reference images and it would be impossible to say which one was the most significant contributor to the finished piece, I felt comfortable that I have not ripped anyone off in my depiction of the T-Rex.

I wanted to go big on the exaggerated mouth, a toothy grin with an equal mix of menace and fun. I think I achieved that. 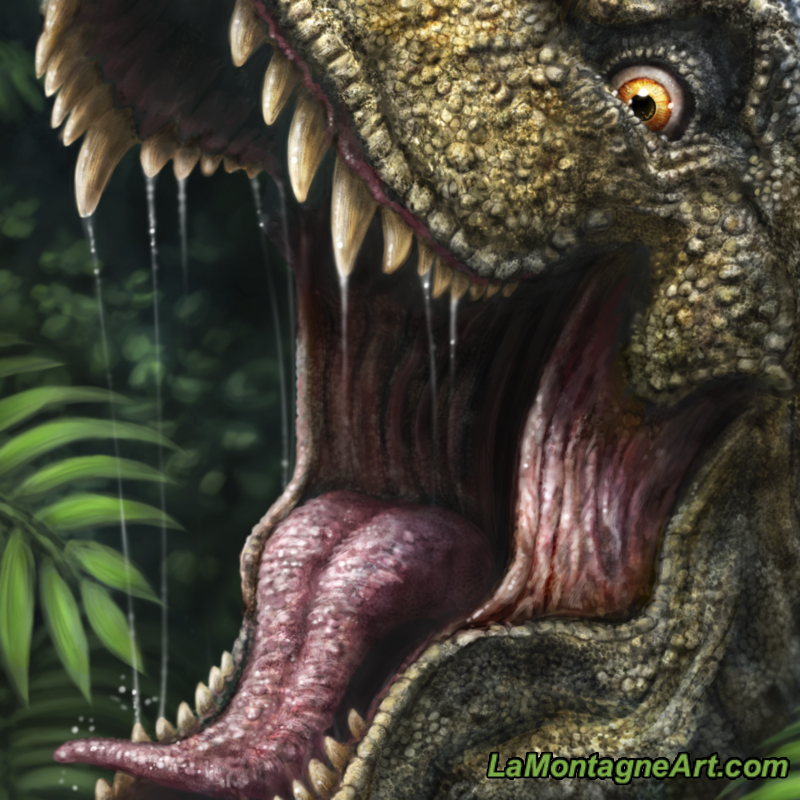 I was prepared for this to be a difficult piece, and it was. The skin texture proved incredibly challenging because I wanted to convey the reptilian skin, but I didn’t want to go in and map it so that it was hyper-accurate. The overall feel of the painting was more important to me.

I did create a couple of new brushes for this, something I haven’t done in some time. I’d forgotten how much fun that can be. The background is not the focus of the piece, but it took a long time to paint, though it’s mainly out of focus to suggest depth of field. I deliberately didn’t include the little arms for which the T-Rex is well known because I wanted the face to be the focus, and it would have required a different composition.

Earlier this year, I had to replace my computer. When the motherboard failed, at least I think that’s what failed; I knew it was time for a whole new machine, rather than replacing parts. My computers are custom built and not inexpensive, so it’s money I didn’t want to spend this year, but on the other side of it, I’m glad I did.

This piece really put it through its paces. The final image size was 30”x40” at 300ppi, and the working file size was 1.4GB. This new computer had no perceptible lag or hiccups, and I’m confident the old computer would have struggled. I would have had to have babied it at the end of the piece, careful not to crash it.

I’m glad that I revisited this idea and am pleased with the finished piece. I learned a few new tricks and techniques out of necessity, and that’s always well worth my time.

Best of all, Shonna really likes this one, and she’s my harshest critic. She had some excellent advice when I asked her opinion, most notably to tone down the saliva. I had initially painted several strands between the teeth, and her critique was accurate; less was more. Whenever she likes a painting, that’s a nice bonus.

When I released my last two paintings, Bear Hug and Winter Wolf, I immediately had newsletter followers asking to buy prints. While I would have liked to have had them available right away, I won’t be having those proofed until the new year, along with this one. I’ll be sure to announce it when they’re all available.