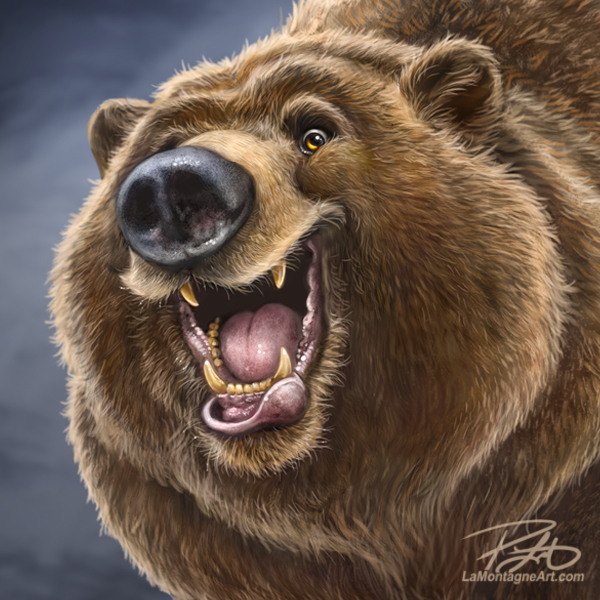 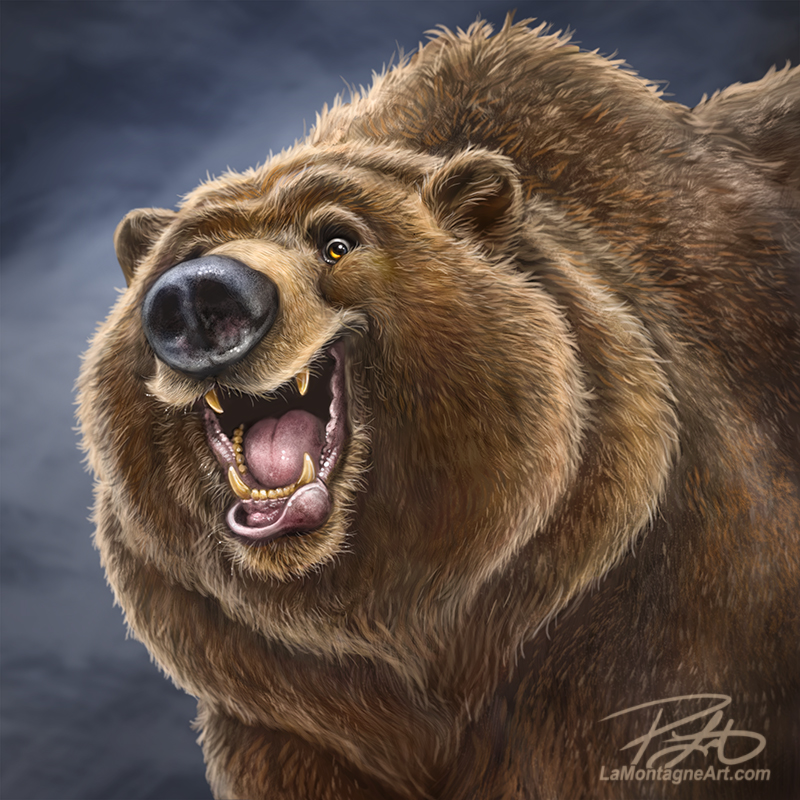 Part of living in bear country is knowing how to be safe when hiking or exploring. It’s important to learn how to react should you encounter a black bear or a grizzly in the woods, and sometimes even in your neighbourhood.

While bear spray within easy reach is more than just fashionable, the best policy is to avoid an encounter, making noise to alert any bears to your presence. Most of them don’t want to encounter humans, so they’ll scurry off before you even see them.

Certain times of the year, however, it’s not so simple. If she’s got curious cubs, Mom will stick around to protect them because they don’t yet know to avoid people. In the fall, bears are eating as much food as possible, preparing for hibernation, and it’s not easy to distract them or get them to leave a bush full of berries.

You can buy bear bells all over the place around here, but they’re ineffective. The noise doesn’t carry; it’s too soft to be heard over the wind or through trees. The same goes for banging sticks or rocks, as those sounds occur naturally.

The best noise is the unmistakable human voice. A conversation among a group of friends will usually convince a bear to seek life elsewhere. Sure, constant yapping goes against the pursuit of natural peace and quiet, but ambulance sirens are worse. Pick your poison. 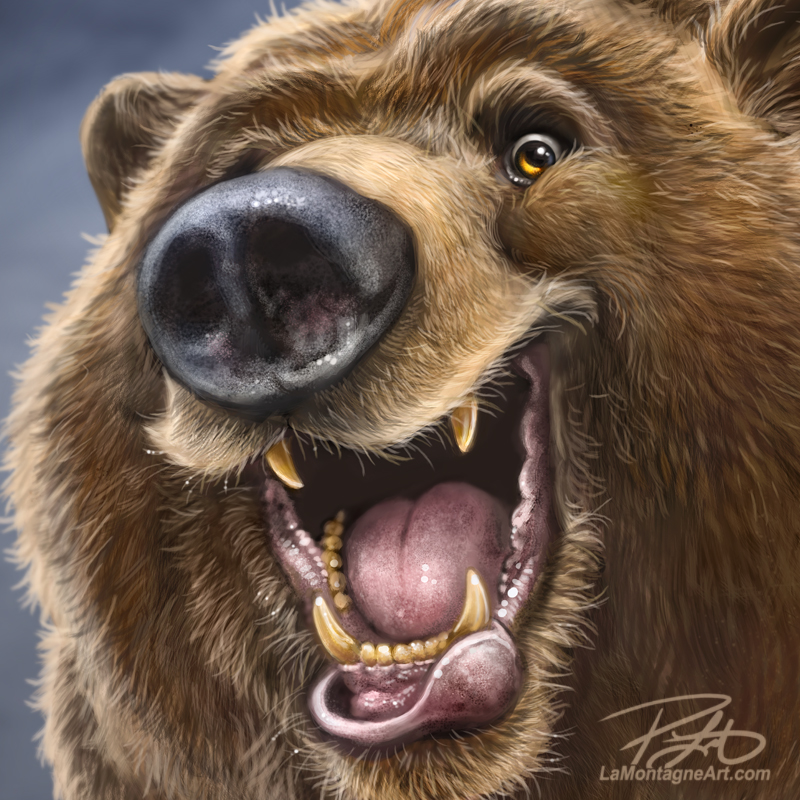 When it’s tough to get a group of people together for a hike, or you just don’t like that many people in the first place, you can sometimes identify solitary hikers by their familiar call of, “Hey Bear!”

I’ve heard this call more times than I can count in the 20+ years I’ve lived and hiked in this area and have used it myself. But it always strikes me funny because, last I checked, bears don’t speak English.

As far as they’re concerned, you could yell anything, and it would still accomplish the same goal. To a bear, there’s really no difference between yelling “Cleanup Aisle 4” or “Flip Flop Hula Hoop” or “Blah, Blah, Frickety, Blah Blah!”

And if you happened to yell, “Hey, Elk” or “Yo, Squirrel,” it’s not like a grizzly will continue to go about her business, thinking, “oh, that’s for somebody else.”

I don’t know why this occurred to me while painting this bear, but it made me snicker. I thought of walking through the woods, getting that familiar ‘it’s quiet, too quiet’ feeling and calling, “Hey, Bear!” only to have a massive grizzly pop its head up out of a nearby bush and answer, “Hey!” 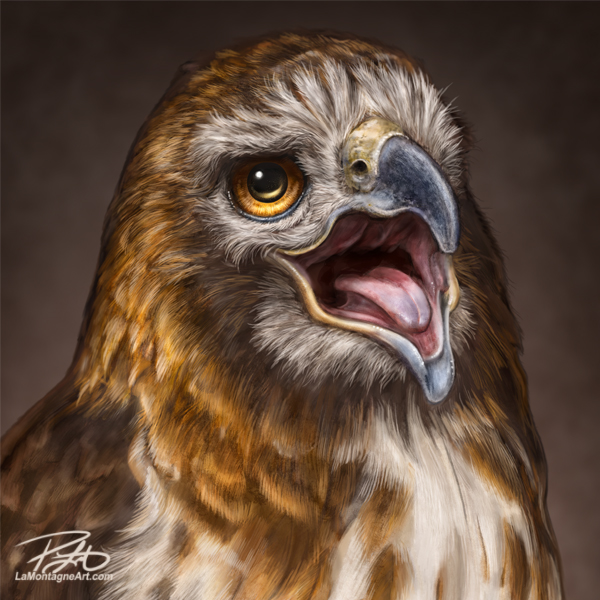 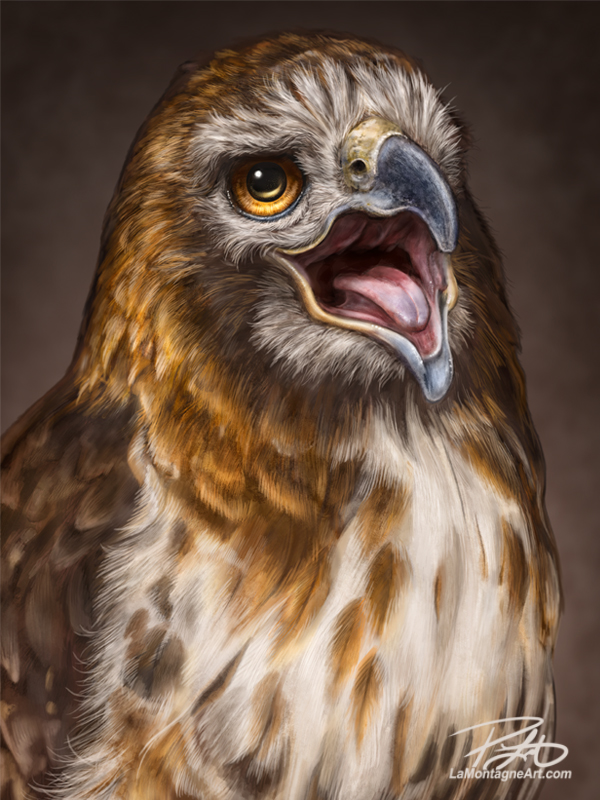 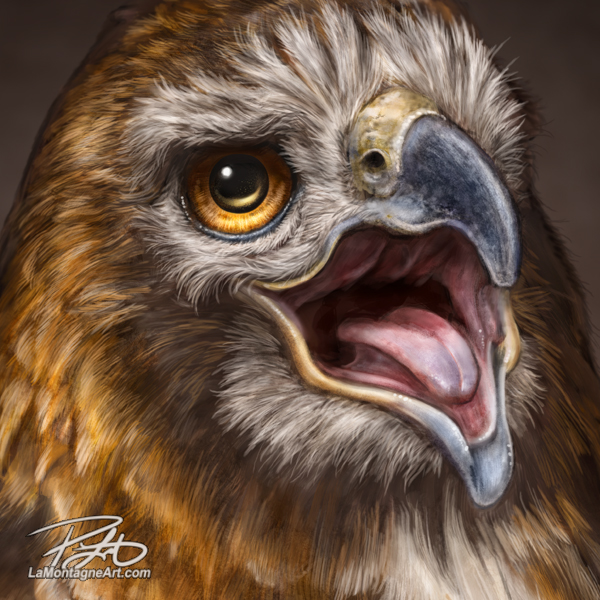 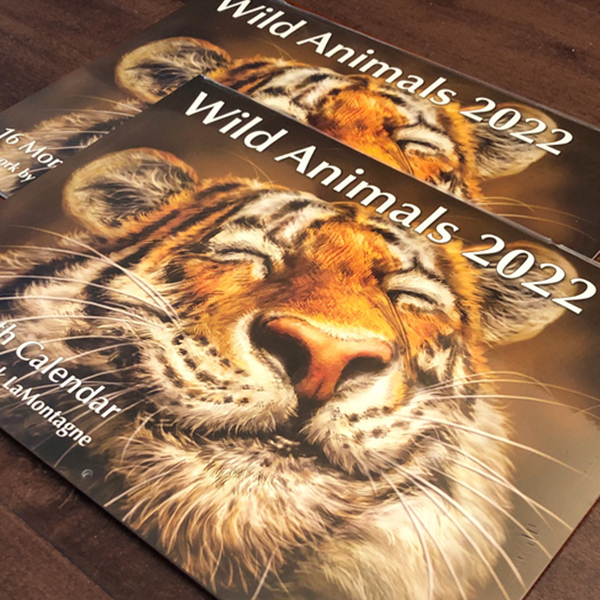 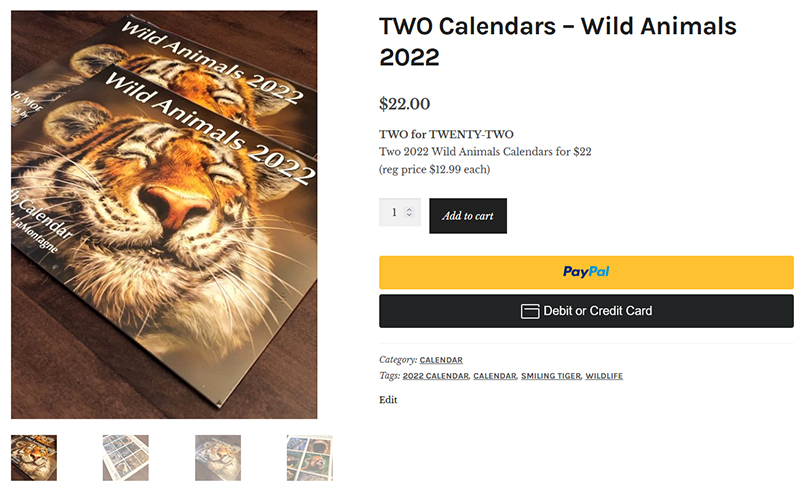 My Wild Animals 2022 calendar is now available in the shop. While each is regularly priced at $12.99, the shipping fees can sometimes be the same or more than the price of the calendar. In order to make it worthwhile, I’m offering the calendars at TWO for $22. The discounted price offsets the shipping cost, and now you’ll have a second calendar full of whimsical wildlife to give away as a gift. 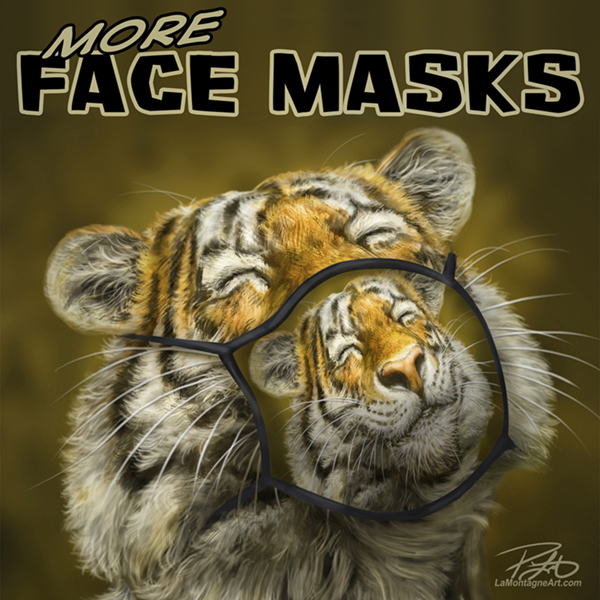 The response to the forthcoming non-medical masks has been a little overwhelming and I’m glad that there is such great interest.

Here are the other seven designs being produced. If you missed the first batch I shared, you can see them here. 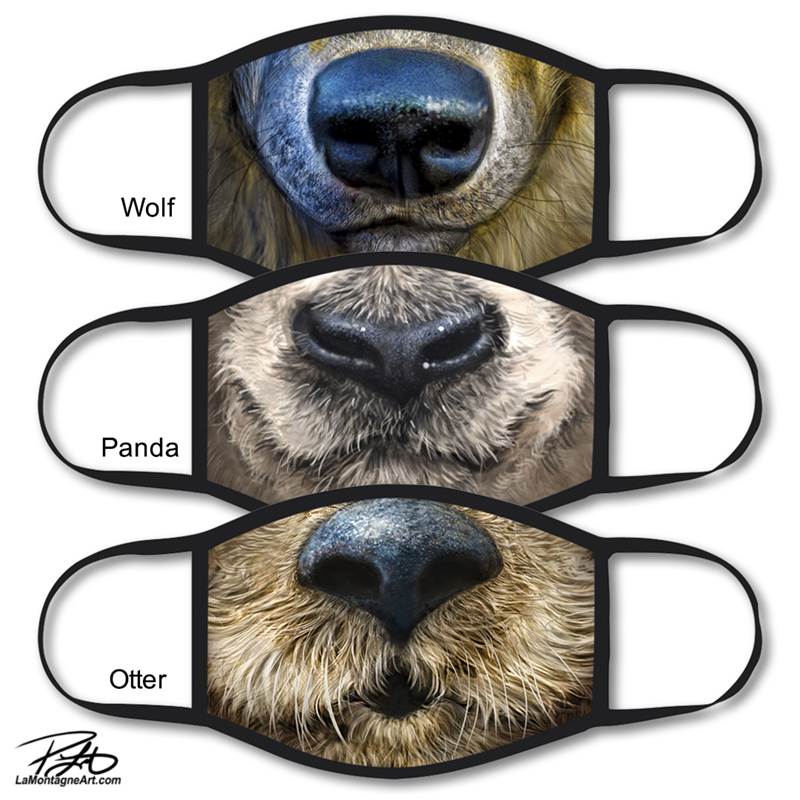 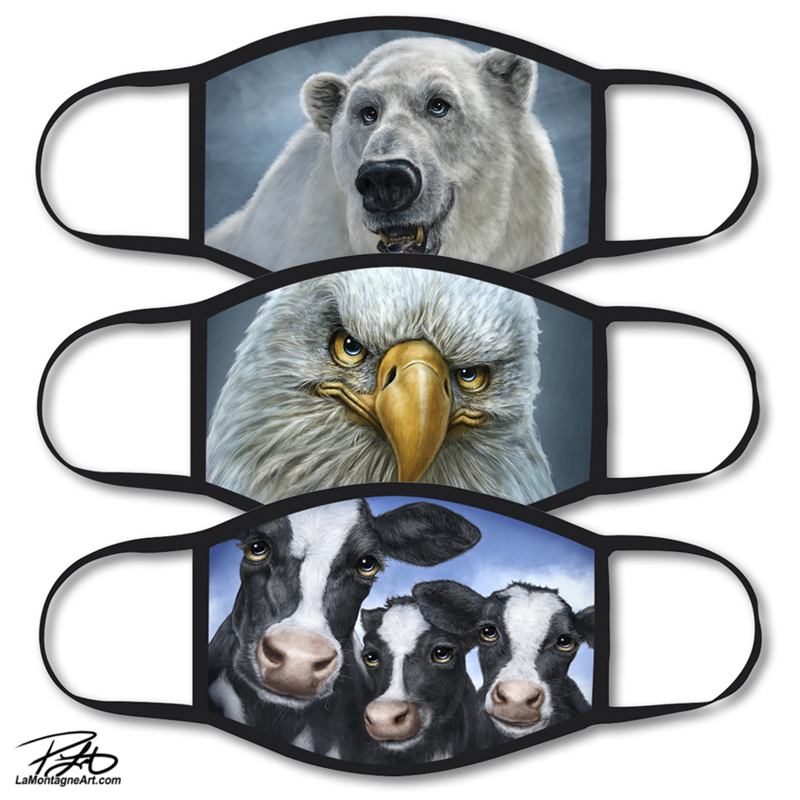 People are asking the same questions, so here are the answers, based on the information I have. Like this situation in which we’re presently living, things may change, but hopefully not.

1) How much will they cost?

2) When are they coming?

The masks are in transit to Pacific Music and Art right now. I won’t link to their website, because it’s under renovation this weekend. Once they arrive, they need to be printed and shipped. So when I have them, I can fill orders. They are expected to arrive sometime this week, might be shipped to me the following week.

Your patience is appreciated, and it’s likely we’ll be wearing masks for quite some time, even when they relax the isolation rules. I’d love to be able to ship these tomorrow, but everything moves a little slower right now as we’re all hobbled by our present circumstance.

I will be offering the first batch of these masks as an exclusive pre-order offer to my newsletter followers. I know that some people have shared the first post on Facebook, Instagram and Twitter and a common comment has been “let me know when they’re available.”

The only way to know is by signing up for my newsletter. These won’t be available on my site (at least not yet) and all orders will be done by e-transfer or Paypal invoice. If you’re local in Canmore, I expect to be able to deliver them in person; physical distancing rules apply of course. Or I can just mail them to you with the rest.

The reason I’m doing them by pre-order is because I only want to order what people want. Ordering large numbers of all 16 designs means I’ll undoubtedly end up with a stockpile of the least popular ones. While prints don’t go bad if I hang on to them for a couple of years, here’s hoping there won’t be any demand for masks a year from now.

As it can’t be repeated enough, these are non-medical masks and not a substitute for staying at home, hand-washing and keeping a distance of 6ft/2m or greater if you have to go out and run errands.

EDIT: Yes, these masks will be washable. 🙂 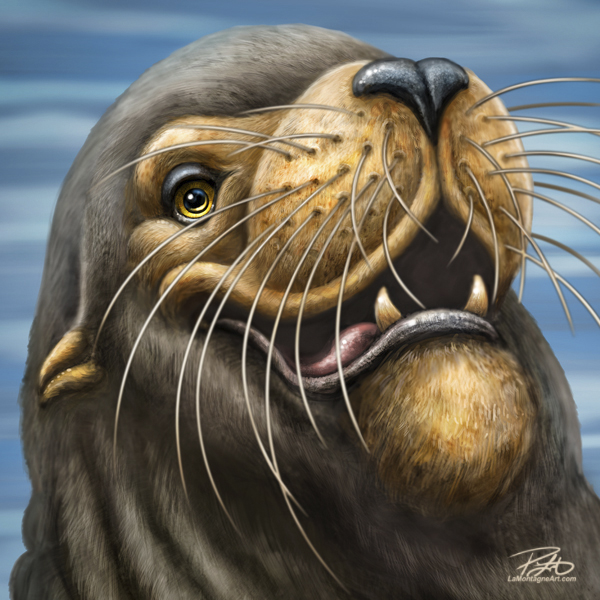 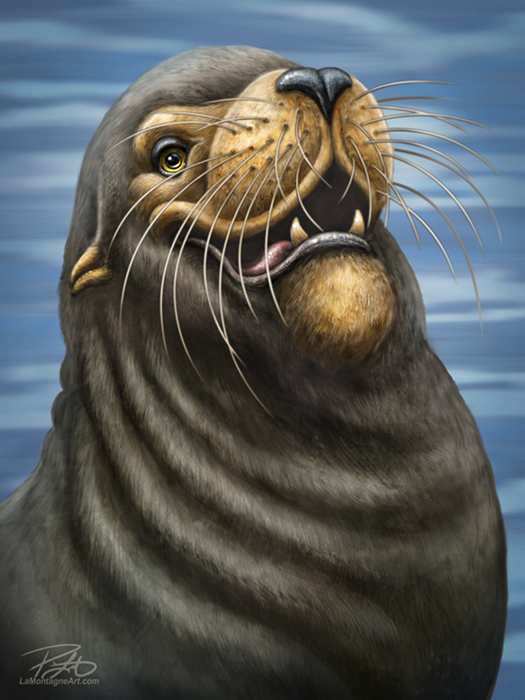 It’s been some time since I’ve done a painting in my whimsical wildlife style, but I was pleased to put the finishing touches on this California Sea Lion this morning.

This year has been a challenge to get any traction on new work as the business of being an artist has taken precedent over the artwork itself. It isn’t enough to create the art; you also have to sell it, which involves a lot of behind the scenes admin type stuff, especially when a large new license is involved.

While I enjoy most of the paintings I do, some of them are done with more of a commercial intent than for my own pleasure. This is one of those. Pacific Music and Art has quite a few retail clients on Vancouver Island and all up and down the coast into the United States. 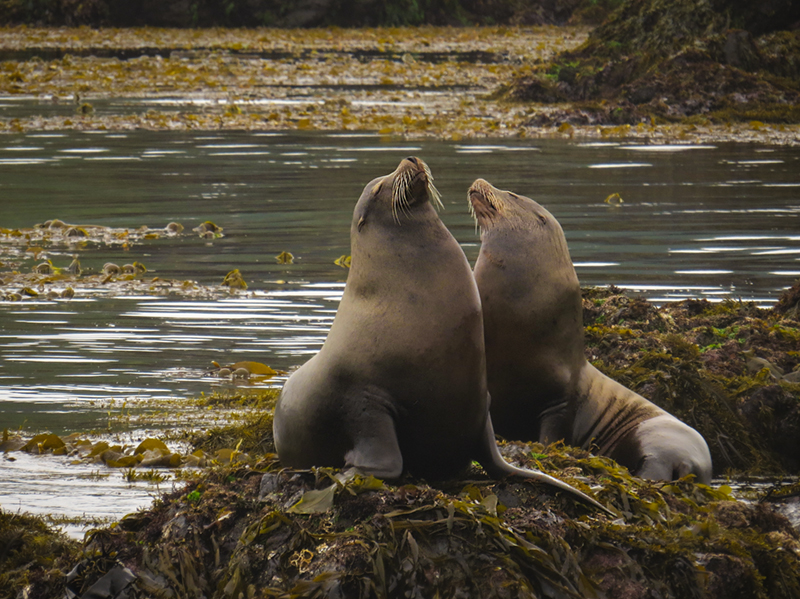 A sea lion might not come across as a big draw like a bear, eagle or whale, but they are popular with tourists, largely because they’re all over the place and accessible. They’re just a comical looking animal, with an obnoxious air of entitlement that reminds me of politicians, no offense intended to the sea lions.

Add in their distinct barking, awkward movement on land and naturally amusing expressions, I’ve always been pleased to see them on our many trips to Vancouver Island. It wasn’t hard to find reference to paint this piece, because I’ve taken plenty of shots of them over the years, just a few shown here. 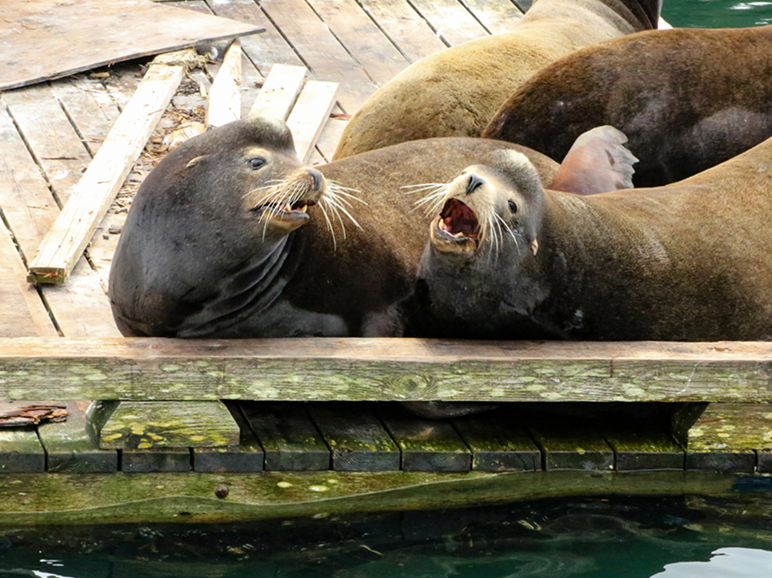 Shonna and I do have a trip to the Island planned for later in the summer, but it will be the first time we won’t be going out to Ucluelet, one of our favorite places on earth. We’ll still be on the hunt for wildlife, but the adventure we’ve booked this year will have a different flavour and some new excitement.

In the meantime, I’ll be starting another painting right away with plenty more planned for this year. 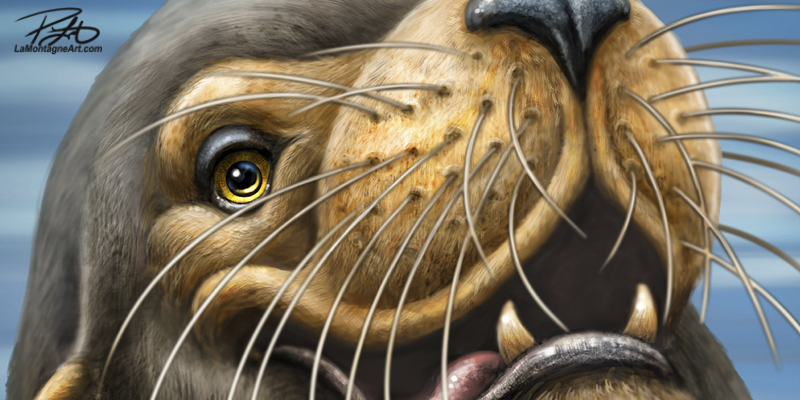